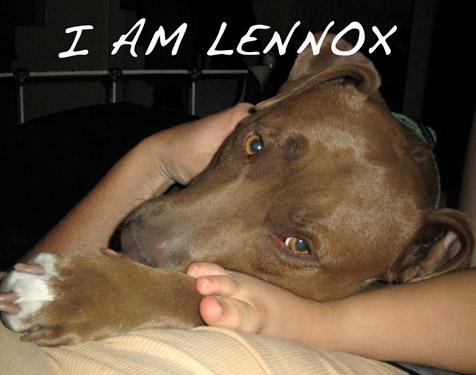 Lennox the pit bull who was killed

The death of Lennox, a seven-year-old dog killed July 11 in Northern Ireland for resembling a pit bull, has become a rallying cry for animal advocates seeking to prevent and overturn breed-discriminatory legislation (BDL) that targets dogs based on appearance rather than behavior.

In the wake of his death, Best Friends is asking supporters to channel their grief and anger into local activism to help bring about an end to the canine-profiling laws in the United States that cause the deaths of dogs like Lennox daily.

"Best Friends is saddened that Lennox was killed simply because of breed discrimination," said Ledy VanKavage, senior legislative attorney for Best Friends Animal Society. "We hope his death will not be in vain, but will spur people to channel their grief into positive change, and to judge every dog as an individual, not condemn them because of their appearance or breed."

"The simple truth is breed is not a factor in bites. All dogs, like all people, are individuals and deserve dignity and respect. It's up to us to speak out and stop the killing," she added.

Support for Lennox the dog

Lennox attracted worldwide attention during the two years since he was taken from his family. Tens of thousands of people voiced support for his cause through social media sites, and more than 200,000 people signed a petition asking for his release.

Thousands of people have posted photos on Facebook of their own family dogs, mostly pit-bull-type dogs, with the caption "I am Lennox," to show solidarity and support for an end to breed discrimination in all its forms.

"Tragically the heartbreak of the Lennox case is repeated daily in counties, cities and towns here in the United States that have enacted breed-discriminatory laws," VanKavage said. "To honor Lennox’s memory, citizens in those areas should rise up and demand that breed-discriminatory laws be repealed. People should attend city council meetings, write letters, start petitions on change.org, organize and run for office."

In the United States, an estimated 300 cities and counties currently have some form of breed-discriminatory law in place, according the National Canine Research Council. This is out of an estimated 19,000 total cities, so those with BDL represent only about 2 percent, but include large cities like Denver, Colorado, and counties like Miami-Dade in Florida.

VanKavage noted that there appears to be a trend toward more cities repealing BDL — many after discovering that such laws are expensive, ineffective and don’t result in safer communities. At the same time, VanKavage said, far fewer cities are adopting new breed-discriminatory laws.

Ohio’s HB 14, which went into effect in May of this year, removed pit bulls from the state’s definition of vicious dogs.

Prior to its passage, Ohio was the only state in the country to automatically declare a dog vicious based solely on appearance, without considering behavior. The new law also strengthens the state’s dangerous dog laws so that they more correctly target reckless owners and dangerous dogs instead of innocent pets.

Advocates hope that Miami-Dade County will be the next jurisdiction to follow the trend, by repealing their 23-year-old ban on pit-bull-type dogs. Voters will have the opportunity to vote "yes" August 14 to repeal the law that targets dogs based on breed or type, allowing the seizure and impoundment of family pets for no other reason than the way the dog looks.

"With the renewed awareness of breed discrimination created by the tragic death of Lennox, the public's distaste for this arbitrary means of regulating dogs is mounting," said Katie Barnett, program/legislative analyst for Best Friends Animal Society. "That, combined with Miami-Dade's recent announcement of its goal to save 90 percent of shelter pets and achieve 'no-kill' status, the timing could be ideal for a repeal of this outdated and ineffective law."

A more effective approach to dangerous dogs and reckless owners

Best Friends Animal Society has for many years encouraged state and municipal governments to adopt breed-neutral, dangerous dog/reckless owner laws that focus on the key causes of dog aggression — owners’ failure to spay or neuter, train and socialize dogs regardless of breed, or because they abuse/neglect dogs or force them to live on chains.

Many states have passed laws that allow all dogs to be evaluated and treated as individuals and permit local jurisdictions the authority to hold reckless owners accountable for the behavior of their dogs.

Photo by Temma Martin, featuring Pansy, a pet pit bull terrier who is showing support for the cause