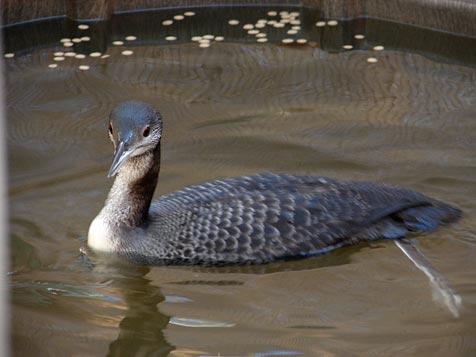 Loon bird in need of rehabilitation?

The common loon has a certain physiological quirk that can make people think the worst. The bird can only take flight from a body of water, which they do by getting a long running and flapping start across the surface of water. In fact, the loon can’t waddle, drag, or otherwise walk or even stand on land.

"Imagine lying facedown on the ground and moving forward just using the tips of your toes to push yourself along on your chest," says Barbara,

Mobility is therefore pretty much limited to floating or flying. Every thing they do is either in the sky or on the water. For whatever they lack on land, they make up for in water. They are indeed amazing swimmers and divers.

So, on occasion, one may find a loon grounded, unable to fly or even to move, having been blown off course during his nighttime migration, or having mistaken some land feature as a body of water. One or the other might have been the case when the couple found the bird wailing (a common call loons make).

"Loons are difficult because they’re high-stressed birds and don’t like to eat in captivity," Carmen says.

Carmen and Barbara took him to Wild Friends to double check for injuries and illness. The bird had no injuries, but was rather dehydrated. They also tested his blood for infection and took X-rays to make sure he didn’t have any trace of lead in his body.

"Because loons eat fish, they often ingest lead fishing sinkers, or eat spent lead shot thinking it is gravel, and many die from lead poisoning," Barbara says. The bird was found lead-free, thankfully.

Carmen and Barbara transported him the next day to a reservoir near St. George. About 70 miles west of Best Friends, Quail Creek Reservoir is a popular wintering spot for loons. There, the loon slid from the crate into the water and was last seen mingling with other loons and some Western grebes.

Want to learn more about Wild Friends? Take the online tour to see where this loon and other wildlife receive the care necessary to return to the wild.