Elroy the cat came to Best Friends in Los Angeles after losing the only home he’d ever known. The exceptionally fluffy and handsome gray cat was entering a pivotal moment in his life, one that would ultimately test his resilience and perseverance. His next few weeks would illustrate the emotional depths of the connection between animals and humans, including the power it has to hurt, and to heal.

Elroy’s arrival was unremarkable in a lot of ways. He was well-groomed and healthy — even a bit overweight at more than 14 pounds. After the medical team checked him over, he was moved into the adoption area so people could meet him so that ultimately he could go to a new home.

While Elroy’s physical health was good (although he needed to lose a little weight), the exam couldn’t have foretold the emotional turmoil he was experiencing following departure from his home. But soon it would become glaringly evident. 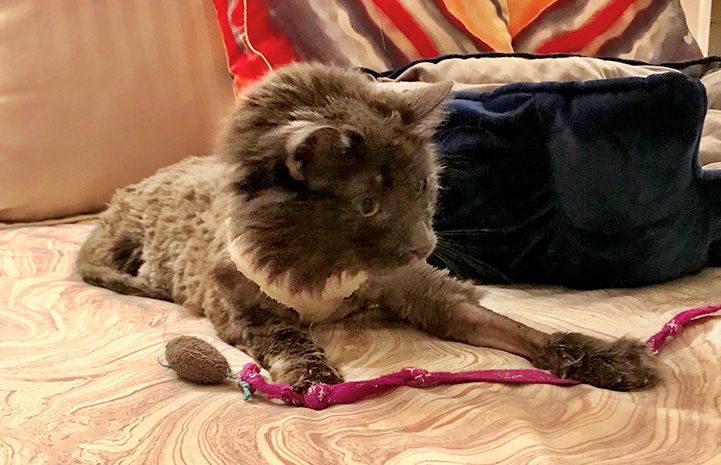 Cat struggles to cope after losing his home

I met Elroy two days after his arrival. And even though the animals at Best Friends are given the best possible care, the unfamiliar sounds and smells of a shelter can be stressful. It can be especially difficult for pets like Elroy, who have only known one home in their lives and suddenly find themselves in an unfamiliar place. And they have no idea why.

The stress of the sudden change quickly took a toll on Elroy’s physical health. He quit eating and in just a few days his weight dropped a full pound. He was moved into the clinic, where he could be closely monitored and the medical team could help him as much as possible. But Elroy only got sicker. He was running a fever, then came down with an upper respiratory infection, and after 10 days it was necessary for vets to insert a feeding tube to keep him alive.

In the days that followed, I visited Elroy often. He stopped grooming himself, and the medical team had to shave his fur in an effort to keep him clean and comfortable. Each day, I found myself worrying more and more about whether he would survive. 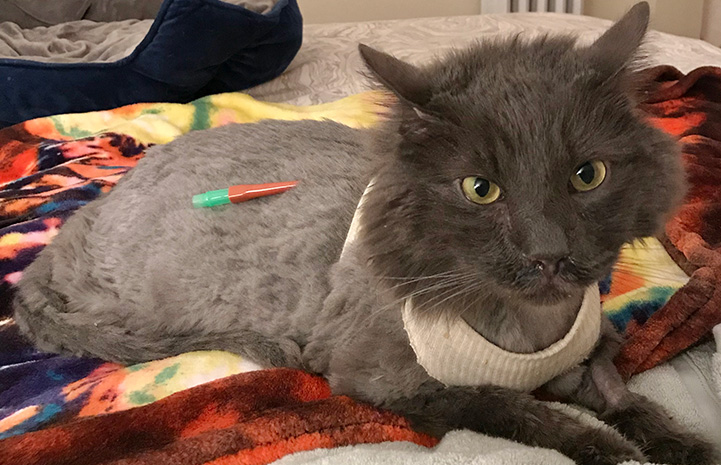 The decision to foster a sick cat

One Friday when I went to the clinic to check on Elroy before I left for the day, I thought about what the last couple of weeks must have been like for him. What must he be thinking? Had he given up? He had been receiving expert medical care and yet he was getting more and more fragile with every passing day. It appeared his spirit was broken, and my heart broke for him.

I was desperate to help him, but more than anything, I was determined to make sure that if his time had come, he would spend his remaining days in a comfortable bed instead of a kennel. I wanted him to be showered with the love he deserved and so desperately needed for all the days he had left. The medical team feared that moving Elroy into foster care might not be enough to turn things around, but everyone agreed it was worth a try. That night, Elroy left his kennel and came home with me. 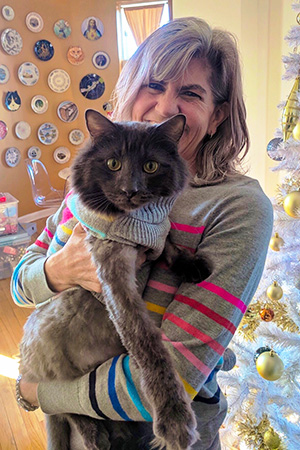 I had never fostered a cat before and Elroy required a high level of commitment. My wife, Karen, and I set him up in the guest room and I moved in so I could keep an eye on him throughout the night. He had to be fed through the feeding tube every four hours, which meant restful sleep was elusive for both of us.

To help with his congestion, we treated him to steam baths twice a day. We administered his prescribed medications on schedule, and although he wasn’t eating, we prepared his meals in the hope that he would decide to eat on his own.

Aside from frequent tube feedings and the steam baths, Elroy’s first few days in our home were quiet ones. He spent most of his time curled up on the bed. The night he found the energy to play with a wand toy, we were so excited we cried. By Day Five, we saw him groom himself for the first time. After two weeks his eyes were bright and his sneezing had diminished considerably. It seemed like each day ushered in new reasons to believe that Elroy would pull through.

[Tale of a cat princess and the power of fostering]

I brought him back to the clinic for a vet check, and although he still wasn’t eating, the medical team was encouraged by his progress and decided to remove the feeding tube and send him back home with me. That night, for the first time since he’d arrived, Elroy ate dinner on his own.

Over the next several weeks, he continued to improve. His respiratory problems diminished and he regained weight. He played with the other animals in our home and his personality blossomed. It was clear by then that Elroy had not given up at all. Time in a foster home was just what he needed to get back on track. 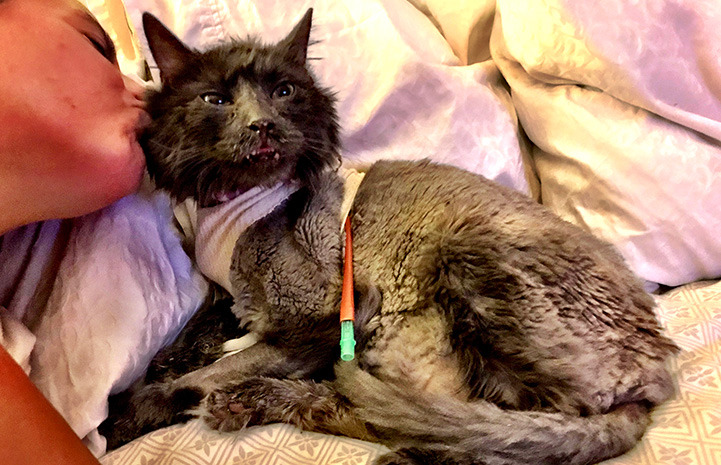 Since the day we brought him home, friends had been following Elroy’s progress, and when he was finally ready for adoption, it didn’t take long to find the right match. Laura Gatewood and Steven Waller had recently adopted another fluffy, gray, chonky cat from Best Friends named William Grayson, and they had since determined that he needed a playmate.

It’s not a stretch to say that when Laura and Steven first met Elroy, it was a love at first sight. In short order, they adopted him and brought him home to meet his new brother.

Today, Elroy goes by the name of John Campbell, and he and his big brother William have settled into a happy life together with their human mom and dad. William and John, though complete opposites, complement each other well. William is the hard-scrabble, rambunctious cat who acts tough and plays hard. John is the kind, tender, more refined gentleman who seems to have a calming, positive influence on his excitable older brother. You might say John is William’s life coach.

The lives of William and John merged by happenstance, but to see them now is to know that this family was meant to be. The boys spend their days doing whatever they want to do, which is usually some combination of playing, sleeping, eating, getting showered with affection, and then sleeping some more. But what’s even more important is that they spend their days together surrounded by love.

They say life is a journey. Although John’s journey hasn’t always been easy, his path has been filled with valuable lessons for everyone involved ― lessons about heartbreak, compassion, fortitude, survival, hope and new beginnings. Most of all, though, John’s journey is a lesson in the undeniable healing and overwhelming power of love. 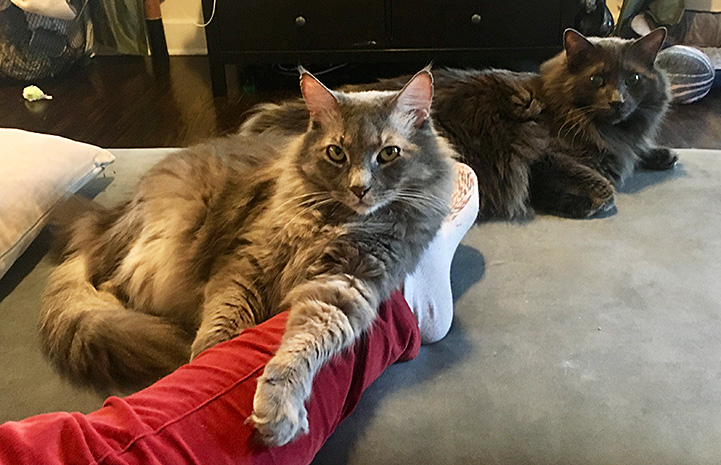 Foster an animal, save a life

Foster families play a critical role in lifesaving. Open your home to an animal in need and save a life today.

Film noir goes fluffy, thanks to Twiggy the cat