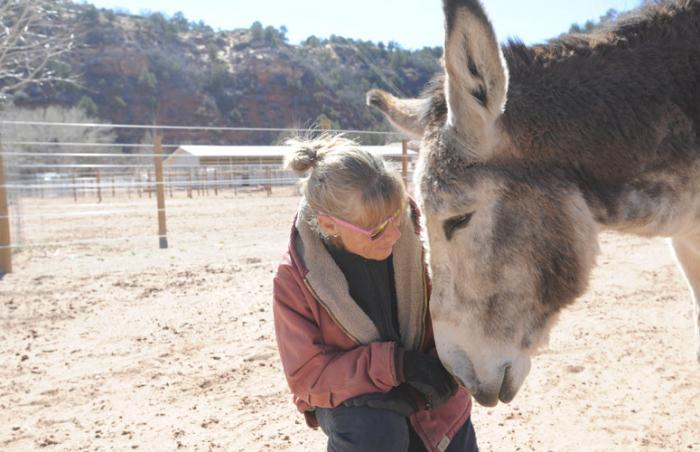 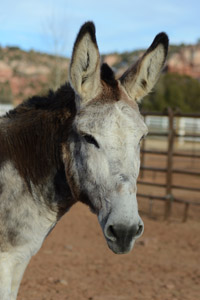 If you happen to be in Horse Haven and hear what sounds like the shriek of a hybrid dragon and parrot echoing through the canyon, have no fear. It’s just Speedy, the Sanctuary’s biggest and most vocal long-eared resident. Speedy is a mammoth donkey (a supersized breed of donkey) who had some hang-ups about being led with a halter and lead rope. But, when he needed physical therapy to recover from surgery, he had to get over those hang-ups. Fast.

Speedy spent the first 17 years of his life as a breeding stud, but when he came to the Sanctuary, those days were officially behind him, and he was gelded (neutered). To recover successfully from the surgery, Speedy needed a strict physical therapy regimen:  lots of walking and trotting so his wound would drain and heal properly. But Speedy was none too thrilled with this idea.

Speedy was used to wearing a halter, but he refused to be led around like a docile pony. Often stereotyped as stubborn, donkeys really just have a keen sense of self-preservation. They’re also much stronger for their size than horses – and Speedy is a very big donkey. He quickly figured out how to throw a monkey wrench in the physical therapy routine.

Sometimes he’d simply plant his feet and refuse to move. Other times, he’d run away. Donkeys are indigenous to mountain regions, where predators can easily trap them up against ledges. Therefore, they’re more likely to stand and fight (i.e., kick) when scared than horses are. But Speedy never lashed out that way. He didn’t want to hurt anyone or be ornery. He just wanted to get away, and he was so strong and fast, it was impossible for caregivers to get him to stick around long enough to be convinced no one would hurt him. Sometimes he’d even lunge and bolt to the end of his lead like a runaway bulldozer, dragging his caregivers along behind him. 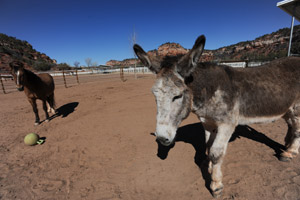 None of these things were helping Speedy heal. His fearful antics made it difficult for his caregivers to give him the proper exercise and get him to and from veterinary checkups. So they got creative with his therapy and pulled out a trick they’d had some success with in the past: Enter the John Deere Gator.

Speedy was suspicious of the ATV-type vehicle at first. His caregivers had to be extra careful to ensure his safety and not scare him. While horses will forgive mistakes their caregivers make, donkeys “make much bigger deductions from the trust bucket than horses do,” says Jen Reid, manager of Horse Haven. It was essential to make the experience as positive and rewarding as it could be for Speedy.

So, while one caregiver drove cautiously alongside Speedy in the Gator, another sat in the passenger seat, holding onto his lead line and gently coaxing him along. Sometimes Speedy would resist, but when caregivers added a little driving game pressure (used in Parelli Natural Horsemanship, the training program used at the Sanctuary), he got moving again.

As soon as Speedy learned the ATV wasn’t going to hurt him – and it couldn’t be pulled to and fro or stopped as easily as a human – he started to respond better and better. “He was a good boy and did really well,” Jen says.

The payoff? Speedy recovered so well that he can now run and play for hours with his pasture mate and friend, Chuck the horse. And he learned some valuable lessons about trust along the way.