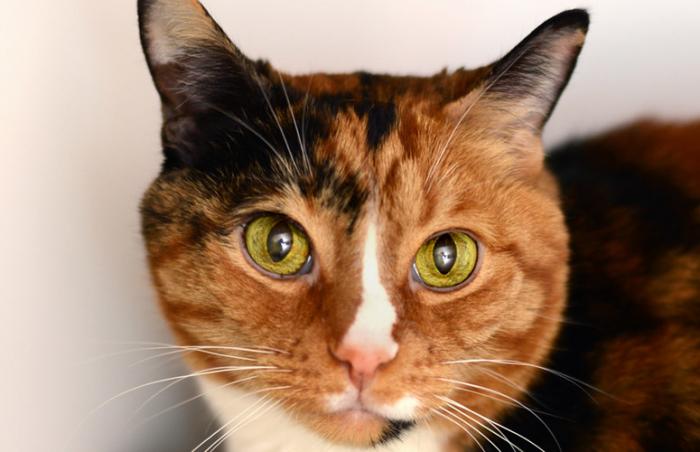 Manx cat is one lucky girl

Ashes is a Manx cat, who was born with a cute little “bobbed” tail. Luckily, she inherited her snub tail without also inheriting Manx syndrome. That’s when the gene for the shortened tail shortens a cat's entire back end, preventing the spinal cord, organs and muscles from developing properly. It can cause some pretty severe intestinal problems and even lead to incontinence. Ashes had no issues there, but she did have diabetes. And, when she ended up in a shelter, that lifelong disease could have gotten her killed.

Fortunately, the shelter staff cared about Ashes’ well-being. Instead of killing her when they realized she was diabetic and didn’t feel they could effectively manage her care, they reached out to Best Friends. So Ashes came to the Sanctuary, where she got good news: Her diabetes isn’t very severe. Though she may need insulin injections in the future, for the time being, her condition can be managed entirely through a prescription diet. So, instead of getting insulin injections, or worrying about Manx issues while she lived in Cat World Headquarters, Ashes spent her time keeping her room neat and warming volunteers’ laps.

Ashes’ caregivers were smitten with her immediately. “She is a sweet, perfect girl,” caregiver Dale Oster says, and she has some unique habits. When her caregivers bent down to scoop her litter box, Ashes would come right up and sniff their noses for attention. But she didn’t leave much of a mess to clean; she is fastidiously – almost mysteriously – neat, hardly ever getting a single piece of litter outside the box. Caregivers swore she straightened up her room before they came in. She may be a very tidy cat, but she’s not prissy; she loves to run around and play in her outdoor cattery, and she loves making new friends.

Toy mouse versus the human lap

Volunteer Don Ahlas is a Manx cat enthusiast. Don comes to Kanab to escape the cold Iowa winters, and this winter he got his Manx cat fix by spending quality time with Ashes. “Manx cats are very trainable,” he explained one morning while he visited his new friend. “I’m trying to teach her to fetch.” He tossed a little toy mouse and told her to go get it. The pretty tortoiseshell cat watched the toy mouse skid to a stop with interest. But she was even more interested in Don’s lap and leapt up into it instead. “She’s a lap cat,” he said, taking a soft brush out of a drawer. “And she loves to be brushed. I don’t expect she’ll still be here when I come back next year. Someone will scoop her up.”

Don was right; he and Ashes’ caregivers weren’t the only ones she left a lasting impression on. She was adopted just as quickly as everyone expected she might be, and left the Sanctuary for her forever home in mid-January. Ashes, like so many of the animals at the Sanctuary, just needed a bit of medical expertise and time, and now the once at-risk cat is back where she belongs: in a home.

Ashes has gone to her forever home, but there are plenty of adorable and adoptable cats at the Sanctuary.