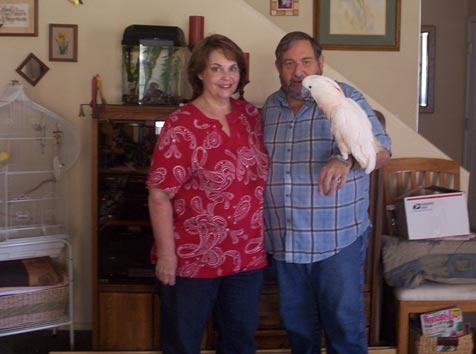 Moluccan cockatoo charms her way to being adopted

When Rick and Theresa Teller of Las Vegas, Nevada went to Best Friends hoping to adopt a bird, they never knew how easy the choice would be in the end. After all, there are a lot of birds at the sanctuary! Shouldn’t have been such a fall-down-easy choice, but then again, Daisy the Moluccan cockatoo doesn’t really believe in the fine art of subtlety. She’s all about laying it on thick and crystal clear.

After Theresa and Rick had visited with around 20 birds and still hadn’t found the right connection, parrot manager Steve Scheurich brought out Daisy. She knew an opportunity when she saw one. Can’t accuse this girl of hemming and hawing, that’s for dang sure!

Daisy stepped right up on Rick’s arm, snuggled into his chest, looked up at him with puppy dog eyes, and said clear as day, "Hi Babe!" Wow. She sure knew how to lay on the charm. Steve’s only response was, "You just bought yourself a ticket to Vegas!"

A loving bird who wants to be loved

About six months ago, Daisy came to Best Friends after having been with the same family for over 20 years. In all that time, she had never once bitten anybody. She’s the ultimate sweetheart. Daisy’s biggest vice? Well, those none-too-subtle pulls for affection were kind of a hint. This girl loves to be loved. And when she feels ignored…let’s just say some earplugs come in mighty handy.

What’s great about her new home, however, is that she will be coddled and pampered, loved and flirted with practically 24/7. Though Theresa still works, Rick is on medical retirement and has all the time in the world to spend with her. She couldn’t be happier! All the "Hey Babe" talk has continued, along with smooches and snuggles and everything else that has made her an instant part of the family.

A bird who barks with the family's dogs

Oh, and there’s one other quirky little antic she likes to pull that helps her settle in with the four-legged members of the family. Daisy loves to bark exactly, we’re talking exactly—like a dog. Her bark is so spot-on, that the two dogs in Rick and Theresa’s home carry on conversations back and forth with Daisy for up to five minutes at a time.

"She doesn’t think she’s a bird," Rick explains. "She thinks she’s a lap dog!" A lap dog who knew how to grab the perfect home, as it turns out. Congrats to all! A happy ending indeed.

There are plenty of other Parrot Garden residents, where the Best Friends birds live, who can also turn on the charm. Please consider sponsoring one of Daisy’s former roommates.