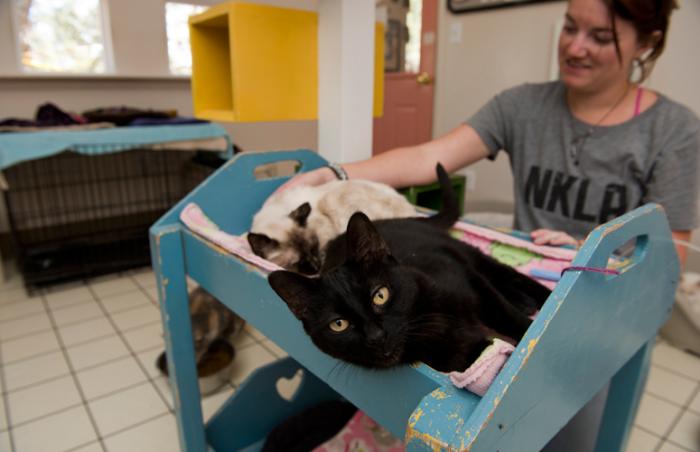 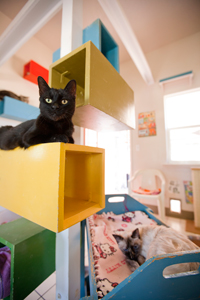 At first glance, Jill is just a tiny wisp of a cat who blends into the background or the shadows. But she’s living proof of the old adage that good things come in small packages. Beneath her solid black fur, the little senior’s personality is bold and colorful, and her heart is so big it’s kind of surprising that it fits inside her tiny chest.

When she first came to Best Friends Animal Sanctuary from an animal shelter that was closing its doors, poor Jill was in a lot of pain. She had such severe dental problems that it was necessary to remove all of her teeth. Whether it was this experience that made her so compassionate toward other cats, or whether she was born that way, it is impossible to know. Either way, Jill is truly a caregiver cat. She is motherly and compassionate.

After she recovered from her surgery, Jill went to live in the most perfect place for her in Cat World — Jill’s Diner. Although Jill’s Diner was named years ago after a different cat, Jill soon made one of the rooms her own, and went into full-on caregiver mode.

At first, she wasn’t all that selective. She’d go around grooming and fussing over anyone who’d let her. But then she found a few cats who really needed her help. One of these cats was Suchin, who’d had a tough life on the streets before coming to Best Friends. At the age of 13, Suchin had finally landed in a place where she could get the care she deserved.

A cat who loves other cats and people 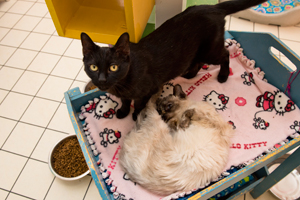 Part of Suchin’s care included giving her daily fluids for kidney problems, and Jill quickly got accustomed to her routine. Every time a caregiver would give Suchin her fluids, Jill would jump up beside her and start grooming her new friend’s fur. That was a big help to Suchin, who sometimes didn’t feel well enough to groom herself and was only just beginning to get used to people. Jill helped to ease that transition to having people care for her, and kept her both comfortable and looking good in the process.

When she wasn’t tending to Suchin, Jill would spend time with her friend Hubble, a slightly younger cat who’d also had his teeth removed. But even with all the love she gave to other cats, Jill always saved time for her human friends. One of her favorite things to do was to leap into her caregivers’ arms, snuggle into their shoulders, and slow dance around the room with them. If other cats were getting attention, she would patiently wait her turn, then give kisses in return for affection.

Nurturing and reassuring another cat

Soon, Jill’s nurturing nature earned her a unique opportunity. One of her former roommates at the Sanctuary, Gidget, had moved into a loving foster home. But Gidget was very shy, and it was clear she could really use the friendship of another cat to help her blossom there. So, Jill packed her bags and followed her.

As soon as Jill arrived, the two were reintroduced and touched noses. The sweet gesture seemed to reassure Gidget that she had a “big sister” now, and everything was going to be OK. Since then, Gidget’s been enjoying all of Jill’s grooming and caregiving skills, and Jill’s been able to continue doing what she does best — tending to another cat who, like her, just needed some extra care and a little boost.