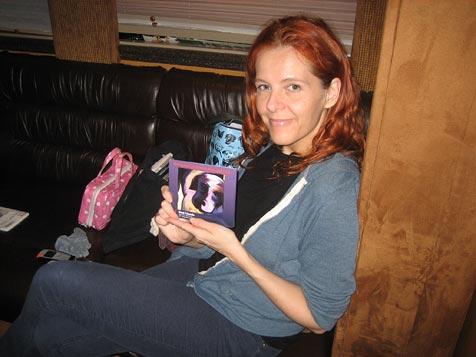 Neko Case's support of Best Friends and the animals

"[Best Friends] is awesome," the critically acclaimed singer told the 3,000 audience members. "I volunteer there myself, and I can tell you, they actually do all they say they do."

Weeks before the show, Case had invited Best Friends to occupy a space at the show’s merchandise table—so that everyone who stopped by to purchase one of her CDs, T-shirts, or posters could also learn about Best Friends, sign up to be a member, and buy a copy of "Giving Animals a Voice Through Music: The Best Friends 25th Anniversary Collection CD."

Case contributed her song "Star Witness" to the CD, half the proceeds of which go to our Puppies Aren’t Products campaign.

With all the people stopping by the merchandise table, Amber Ayers, a marketing manager at Best Friends, was able to sign up dozens for a trial membership. Many others who stopped by were already members or supporters, and were happy to learn about the connection Case has to Best Friends.

"A lot of people were excited to see the person they’re fans of is working with an organization they care about," Ayers says.

During her performance, Case’s voluminous voice swept up the foothills behind the amphitheater, and people walking their dogs there stopped to marvel at it. Spotting the dogs, Case and her back-up singer and fellow "dog nerd" Kelly Hogan kept bantering over how handsome the dogs were, and both went so far as to thank the dogs for coming to the show.

Ever since viewing the first season of "DogTown," the National Geographic Channel’s documentary series about the lifesaving-work Best Friends does with dogs, Case has rigorously endorsed Best Friends and has spread the news about our work to her legion of animal-loving fans.

A visit to Best Friends

Last December, Case spent three days volunteering at our sanctuary in southern Utah. While she was here, she granted us an on-camera interview and recorded two public service announcements, one promoting the anniversary CD.

Moreover, Case and her music label ANTI- gave Best Friends the opportunity to benefit from the online release of the single from her newest album "Middle Cyclone," a work infused with all manner of animal references.

Case’s avid support of Best Friends has coincided with a boom in her career. Her new album debuted in March at number 3 on the Billboard charts. In the weeks before and after the release, Case became a darling in the media. Lengthy profiles and interviews with her appeared in The New York Times Magazine, People, and on ABC News, PBS, and NPR—among countless other media outlets. Many of the stories touched on her passion for animals and her involvement with Best Friends.

"Yet again, Neko has come through for Best Friends," says Vicki Kilmer-Rinker, marketing director at Best Friends. "She’s been terrific in helping us spread our message and bringing Best Friends to the attention of her fans. We can’t thank her enough."

As part of Best Friends’ 25th anniversary in 2009, our goal is to double our membership, so we can double our efforts to bring about a time when all companion animals have a forever home. What can you do to help? Give the Gift of a Best Friends membership to family and friends.