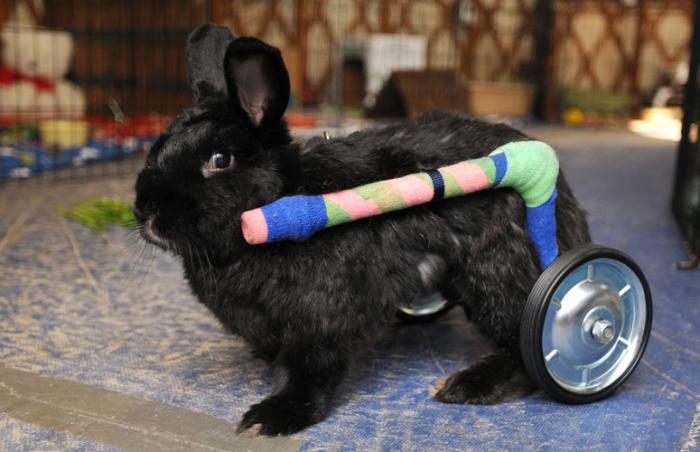 Fargo the rabbit is pleased as punch to show off his new wheels — a specially designed wheelchair made extra fabulous by its colorfulness. You see, Fargo has a neurological condition that causes him to drag his back legs, so getting around can be a challenge for him. That is, it was before he got his new set of wheels.

Fargo was rescued as part of the 2006 Reno Rabbit Rescue, a hoarding case in which way too many rabbits (nearly 2,000) were living in too small of a space. Many of the rabbits from Reno tested positive for the E. cuniculi parasite, which results in neurological problems in bunnies.

At the Sanctuary, the Reno rabbits are getting the care and TLC they need to live the best life possible. Along those lines, Annie, an intern for Best Friends from Washington D.C., had a vision for how to further help these special-needs sweeties.

But first, a little back story is in order to set the stage.

Best Friends caregivers were using a device to help the bunnies with neurological problems get around, but the apparatus, which employed a string to lift up the rabbits’ non-functioning legs, was scaring some of the bunnies.

“Several of the rabbits were afraid, and some wanted to go faster,” says rabbit team leader Jason Dickman, “but the string was a bit short and Annie found herself running after the rabbits, which in turn made them think someone was chasing them.”

Since rabbits are prey animals, having someone follow so closely behind them freaked them out. They tried to run to get away or they just stopped and froze.

“It really seemed to me that something that was supposed to be therapeutic to them was only serving to stress them out,” says Annie.

Suddenly, the light bulb lit up for Annie. She had an idea for how to make getting around easier and less stressful for these special-needs bunnies. She knew about dog wheelchairs, and saw no reason the same type of set-up couldn’t be used for rabbits.

Annie started to devise a plan to make a bunny wheelchair. She researched options online, but had limited success. She found some videos of rabbit carts but no step-by-step instructions. She was on her own. This fact did not daunt the ever-resourceful Annie, though.

Annie built the prototype for a rabbit wheelchair out of PVC pipe and vet wrap connected to a set of wheels. Annie explains, “I was very careful in the design to use lightweight materials and a lot of padding in order to prevent discomfort and the need to struggle to drag the cart around.”

Fargo’s life (as well as the lives of the other bunnies with neurological issues at the Sanctuary) is looking up. Now, in addition to playing with his toys and teddy bear, Fargo enjoys exploring his adventuresome side with the help of his new set of wheels.

Jason says, “Fargo really loves to go in his wheelchair. It makes him feel like a rabbit again.”

Adopt a bunny from the Sanctuary, and give a deserving soul a bright future.