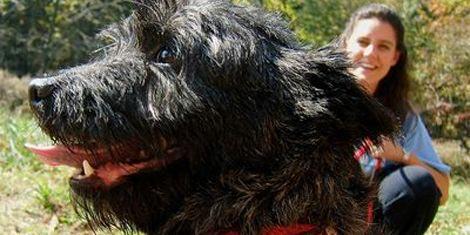 New lives for dogs rescued from a Virginia puppy mill

There are 179 dogs' life stories being rewritten at a sanctuary in upstate New York.

Little more than a week ago, most of these dogs were destined to be sold at auction – and end up back in the hands of puppy millers, or worse. But after Best Friends, in collaboration with other animal welfare groups, rescued those 179 dogs from a Virginia puppy mill, their stories can now conclude with the words "happily ever after."

Take Baggs, for instance (pictured above). The little black cairn terrier was one of 18 different breeds of dogs and puppies rescued from a rural Virginia puppy mill that Best Friends and local rescue groups helped put out of business.

Caring for the rescued dogs

After the dramatic rescue in Virginia, the dogs and puppies received initial medical assessments, then were quickly transported to the Pets Alive facility in New York. There Best Friends will provide continuing care, human contact, and begin the next steps in finding forever homes for all the dogs. Best Friends has been overseeing operations at Pets Alive since the board of directors asked us to come in to save the troubled sanctuary earlier this year. The extreme make-over accomplished by Best Friends made Pet Alive the perfect stopover for the Virginia puppy mill dogs.

So when Baggs and his friends arrived at Pets Alive, staff and volunteers began the process of transitioning them from exploited prisoners to happy, healthy pets in loving homes.

Over this past weekend, the dogs and puppies received continuing medical assessments and were checked for microchips – a standard rescue procedure. About one third were already microchipped, including Baggs. All of the others, however, came back as "lot numbers," meaning the microchip identifiers were used but never registered to anyone.

Baggs, who was named by a rescue volunteer, was tracked to a pet supply company out of Iowa. A representative there provided the name and phone number of the person who bought the chip.

Best Friends staffer Kelli Ohrtman got in touch with the woman, who she’d hoped was Baggs’ long-lost family.

"Yes, he’s a dog I used to have," the woman said. "I bought him from a breeder years ago when he was a puppy, and sold him to a broker in Virginia. That broker told me he sold the dog to an Amish breeder in Ohio." For Baggs, it’s been a long, sad odyssey.

After the conversation – during which the woman never asked how Baggs was doing – Kelli went to his kennel to visit him.

"Baggs likes to be hugged close, so I sat with him in my arms, wishing there was a way I could tell him that soon he’ll get to go to a home where he can be hugged all the time," said Kelli. "He won’t ever be sold to another breeder where he’ll live in a cage. From now on, he’ll just be someone’s pet instead of a commodity to buy or sell."

Next week, Dr. Frank McMillan, Best Friends’ animal behavior expert, will begin to examine the psychological impact of puppy mill confinement and isolation on the dogs. His assessments are part of a larger research initiative to determine both the short- and long-term impact of being born and raised under cruel circumstances in puppy mills.

And over the next few weeks of the rescue operations, our Best Friends Community Programs and Services Network team will be working with breed rescue groups all across the country to find homes for all the dogs rescued in Virginia.

Meanwhile, Mabel the beagle is writing her own blog, beginning with the night she gained the first freedom she’s ever known. Here are some excerpts:

"We finally got to a place where we’ve gotten to stay for several days. I’m glad, because I can tell I’m going to have my puppies very soon. And I should know because I’ve been doing this all my life. I’ve lost track of how many puppies I’ve had over the years, but it sure seems like I’m always either pregnant, nursing or in heat again. As much as I love all my puppies, it’s pretty tiring.

"Right now, I get to stay in my very own snug cage with soft bedding that is cleaned whenever it gets dirty. And the greatest thing about this place is, the humans here take me out of the cage to go to the bathroom! I get to walk around on the grass and sniff through the leaves on the ground. At the place I was before, I stayed in my cage all the time and never got to walk around outside on my own. None of us did.

"I really feel like these humans will do what’s best for me. I can tell by the way they talk to me, and how they give me even more extra special attention than the other dogs. I’m pretty glad I’m with these humans now, even though I don’t really understand how we all got here, or where we’re going next."

We are saddened to report that Mabel was carrying a single puppy that, in spite of valiant efforts by Best Friends vets, crossed the Rainbow Bridge shortly after birth. But Mabel, who is far too old and ill to be forced to breed, has carried her last litter of puppies, and will instead live out her life with love, care, and safety.

Photo of Mabel the beagle by Clay Myers