Since 2011, San Antonio Animal Care Services (SAACS) has progressed at warp speed. Lisa Norwood, public information officer at SAACS, says, until recently, it was "an antiquated municipal shelter." But in just a few years, it has morphed into a forward-thinking organization, working with the community and nonprofit animal organizations to get to no-kill. Now there's a shiny new adoption center thanks to that innovation and collaborative spirit. Everyone hopes it will be the linchpin to save at least 90 percent of the animals who enter animal control. 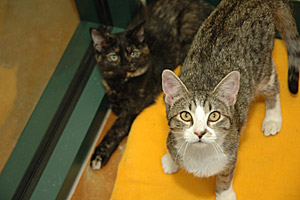 San Antonio Pets Alive (SAPA) formed in 2012 with a start-up grant from Best Friends when it was clear that the city was ready to embrace drastic change. Dr. Ellen Jefferson, executive director of SAPA, says, "We work with the city of San Antonio by taking animals on the euthanasia list, focusing on the ones with no alternatives." The first year of that relationship, the city's live release rate (the percentage of animals leaving the shelter alive) doubled.

But SAPA had no physical location; their success was largely due to a staggering 700 foster homes caring for about 1,300 animals. With everyone reaching for the lofty goal of saving at least 90 percent of the animals entering animal control, SAPA needed to get even more animals out and into permanent homes.

Ellen says, "We know that with a shelter presence, people start coming to adopt. Adoption is probably the most important part of rescue; it helps us (have the capacity to) take in more animals." And so when the city began planning a new adoption center, SAPA put in a bid to run it, and won. Pet Shotz would operate the attached spay/neuter clinic. The Petco Foundation kicked in funds to help build it, and Best Friends gave an additional $550,000 in 2013 to help SAPA keep up their momentum and to give them a boost to operate the new facility. It took everyone working together to see the facility become a reality.

The new Paul Jolly Center for Pet Adoptions is located in the much-loved Brackenridge Park, a destination for people from all over San Antonio. It's a true community resource. There's space for more than 80 pets available for adoption, a low-cost spay/neuter clinic, and a pavilion for classes, adoptions and other events. Lisa describes it as "a place folks can go to adopt a pet and learn about being a responsible pet owner." Since the first 29 animals went home from the new center on opening day in October, there's a feeling of a fresh start and a new beginning for San Antonio's animals.

People in San Antonio are all too aware of what used to go on in the very place where the new adoption center stands. It's where the former municipal shelter sat for decades. Lisa says, "When you consider the antiquated practices the shelter was known for, it wasn't so much of a shelter." For a long time, nine out of 10 animals entering the shelter were killed. Those days are over.

Lisa says, "In order to have a positive future, you have to recognize the past, learn from what happened, and find ways to do better every single day." SAPA's goal is to do 3,000 adoptions from the new center the first year and 4,000 every year after that. Ellen sums up the momentous occasion like this: "We've been calling it a phoenix rising from the ashes. A million animals died at the old facility, on that property. And now we have this new lifesaving building; it's a new beginning for everybody."

Learn more about Best Friends' model programs and how you can get involved.