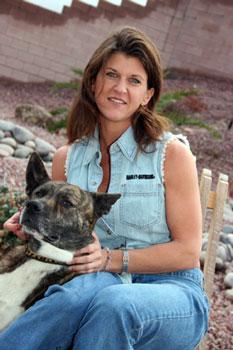 Helping women and pets who are victims of domestic violence

One overlooked facet in domestic violence cases is that women often stay in an abusive situation, or return to their batterers, because of their pets. Now a women’s shelter in Las Vegas is raising funds to build a "safe house" for the four-footed victims of domestic violence.

"We are an organization that works toward eliminating the barriers to women getting help. One of the barriers is that there is no place for them to bring their pets and they don’t have the money to board them," said Brenda Dizon, director of the Shade Tree, Clark County's primary 24-hour emergency shelter for homeless women and women with children in crisis.

Brenda said the idea to build kennels for the women’s pets was the brainchild of Staci Columbo, who is on the board of directors for the Shade Tree. Noah's Animal House will be the first kennel on the grounds of a domestic violence shelter for women and children in Nevada. It will be 1,000 square feet in size and will have 24 kennels, one side for dogs and the other side for cats.

"We’re so excited about Noah’s Animal House. If a single battered family is able to leave sooner because they can now bring Fido or Fluffy with them to Shade Tree, we’ve been successful," Brenda said.

Staci said she had a life-changing experience two years ago when she attended the Best Friends No More Homeless Pet Conference. She said she met many inspirational people, including Mike Arms (president and executive director of the Helen Woodward Animal Center), who helped her see that she could make a difference in the lives of animals.

With this project, Staci clearly saw that helping battered women and children to keep their pets is not only good for their well-being, it will mean fewer animals ending up in Vegas shelters. "We have already had three women arrive at the shelter with pets ... because they heard about Noah’s Animal House and assumed it was already open. We were able to serve two of those women with pet foster parents, but one woman wouldn't leave her puppies to be cared for by a foster and chose the streets instead. This kennel can't be built fast enough!"

Once Staci started getting the word out about Noah’s Animal House and that it was going to be built entirely with donations, the Vegas community threw its support behind the cause. She said, "I have raised over 50 percent of the dollars needed to build the kennel and feel confident that those [remaining] dollars will be raised by the time permitting is done in 90 days. In addition, through the support of Lied Animal Foundation, Iams food will be provided to Noah's Animal House free of charge. Tropicana Animal Hospital has offered to service the animals pro bono, to determine health conditions upon arrival.

"The immediate support from the community, especially the gaming industry, has been overwhelming. As soon as you explain the mission, and give examples of cases where women chose to stay in an abusive situation versus leaving a pet behind to be abused or threatened ... the light bulb goes on. The public needs to be more informed of the link between domestic violence, child abuse and pet abuse," Staci said.

Read about Best Friends partner program with shelters and rescues.