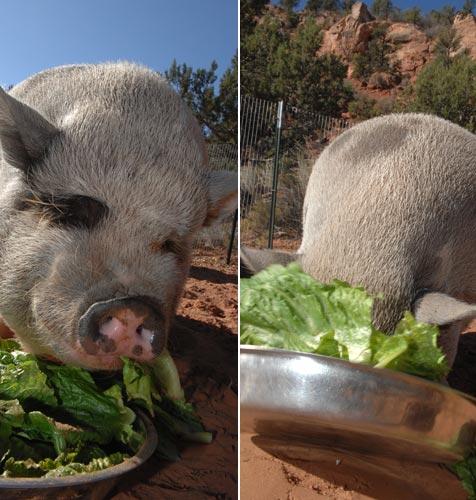 Several months ago, if you had tried to convince Naniue the pig that salads were not in fact a creative way to poison someone, she’d have probably nipped you on the ankle for your efforts. Or else maybe she’d have head-butted you clear off the ground the way she did her chain link gate. Let’s just say she had very strong opinions back in the day.

She was not really an angry girl, nor violent by any means. More just … frustrated. Frustrated at being given leafy food she was sure must be as fatal as strychnine. Maybe she was being a bit dramatic. But to Nanuie, who was used to tasty food and lots of it—including human food—those strange leafy veggies would get her dander up in a hurry. Not a pretty sight. And yes, one day she really did bust her gate off its hinges just to show she could.

Well, as they say, time heals everything. Obese when she came to Best Friends, Naniue has already lost 65 pounds from the new food and exercise program. And here’s the craziest part of all: Now she loves her salads. Um … really? Where once she thought they would be the end of her, now she looks forward to them.

The whole problem started with bad information given to her last family. The folks who bought Naniue loved her to pieces, but were given some bad advice on what to feed her. Following that bad advice, she ended up quite obese. When the landlord said she had to go, Naniue came to Best Friends and went straight into the potbellied pig weight loss program.

That was months ago. And while she might’ve put up a stink about the "rabbit food" in the beginning, she’s so much happier now that you can hardly recognize her as the grouchy girl she was at first. If her new enthusiasm for salads isn’t transformation enough, you should see her go for walks. She exercises on her own now, and loves to get out and about every chance she can. So take heart, all you parents with kids who refuse to eat their vegetables. Their day will come!