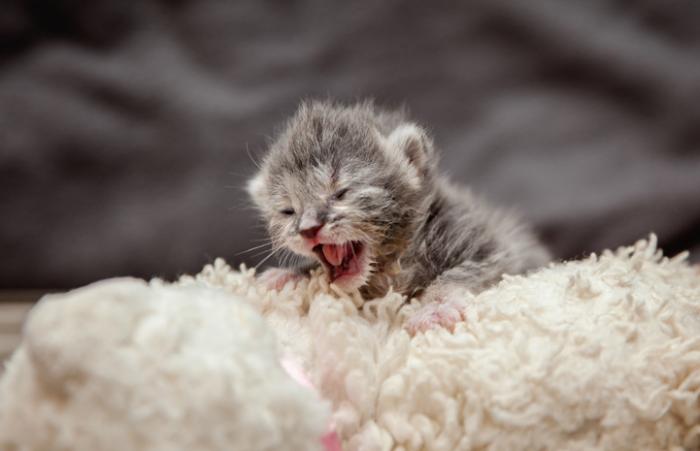 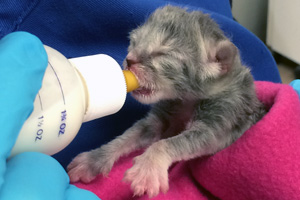 Most kittens who come to the kitten nursery at the Best Friends Pet Adoption and Spay/Neuter Center in Los Angeles are at least a few weeks old when they arrive. But Ivy was different.

“She came to us on day zero,” says Nicole Swartzlanter, neonatal program coordinator at the center. The just-born kitten had been found hung up in a bush, with no mother cat in sight. While it’s usually best not to immediately scoop up kittens found outdoors, Nicole says, “The people who found her did the right thing.”

And though she’d have to make it in the world without a mom, the little silver tabby kitten made it safely through kittenhood and into a home. It just took weeks of love and care, which a team of people were happy to give her.

The nursery at Best Friends’ adoption center in Los Angeles is on track to take in over 2,000 kittens this year from L.A. city shelters. So when Ivy arrived at the center just a few hours after she was born, there were people ready to help her.

And she needed it, because she was completely helpless. Like all newborn kittens, Ivy couldn’t see, hear, walk, stay warm, find food or even go to the bathroom on her own. The nursery is a temporary home to very young kittens, from newborn to about eight weeks old, all of whom need care 24 hours a day. But newborns, like Ivy, are the most fragile.

Staff settled Ivy into an incubator to keep her warm, and began bottle-feeding her every two hours around the clock. While there was no guarantee, it looked like the tiny kitten was going to make it. As the days turned into weeks, her eyes opened, her ears stood up, and soon she could walk around her enclosure. She was making progress and that helped her be prepared when it was time for a change.

A foster home for a kitten

A foster home is often the next stop for kittens who have spent time in the nursery. As Nicole explains, “Foster homes make a huge difference because we only have so much space here.” The moment a space opens up in the nursery, staff call a shelter to take in more kittens immediately, because the need is so great.

So when volunteer Terri Telligman offered to foster a kitten, it opened a spot to save another kitten, and soon Ivy was on her way to her next temporary home.

The tiny silver kitten stole her new foster family’s hearts while they were caring for her. Terri says, “My son was on summer break, and he bottle-fed her while I was at work, and I fed her in the morning, evening and through the night. It was exhausting, but she was so sweet and cuddly, we got very attached to her.”

Ivy soon graduated from the bottle and began eating solid food. And as she grew up, her personality began to show. Terri says, “She was fearless. She tried to play with my adult cats and would climb on my dog, attacking his feet when he was sleeping.” Ivy was growing up, and that meant another change was soon in store for her. 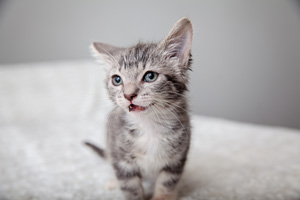 Foster volunteers bring their kittens to the center every few weeks for vaccines, a checkup and to be weighed. Once kittens reach two pounds, they’re big enough to be spayed or neutered. Ivy’s steady growth meant she’d soon be moving on to her next adventure. Terri says, “Our favorite part of fostering Ivy was seeing this tiny baby change before our eyes and turn into a happy, healthy kitten. The hardest part was knowing we had to let her go.”

Once Ivy reached two pounds, she was spayed at the Best Friends clinic. Soon after that, she got to go home to a new family, where she’ll grow up alongside another kitten.

Though she’s only been in the world a few months, Ivy has been through a lot. And the staff and volunteers who cared for Ivy, and will care for more than 2,000 other kittens like her, have put in countless hours, but seeing the results makes it worth every minute.

Nicole says, “It makes me really happy that after all the feedings in the middle of the night and everything else it took to save her, Ivy made it.”

Photos by Lori Fusaro and a Best Friends volunteer