Ask anyone who knows Solarflare to describe him, and it’s clear that he is, above all things, “chill.” He survived getting hit by a car, which broke his back and took away the use of his back legs and the ability to go to the bathroom by himself. But despite all that, he’s just about the most contented cat you’ll ever meet. He loves to nap by the heater, in the sun and in the middle of the floor when it’s cleaning time. And thanks to new therapies, he’s even beginning to get back some feeling and muscle control that he hasn’t had since his accident. 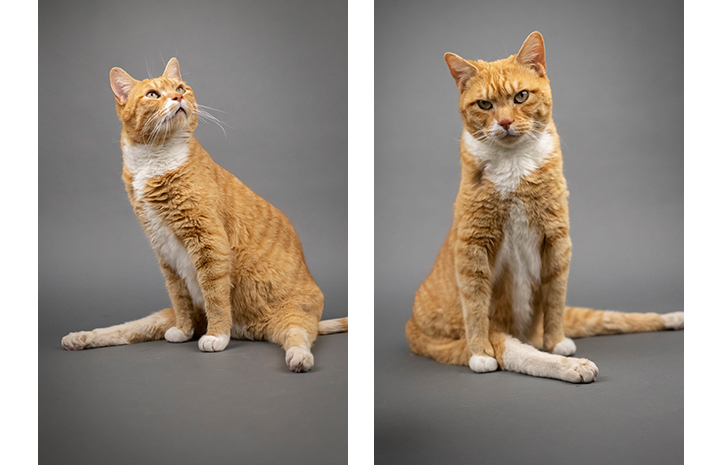 About a dozen cats like Solarflare live in an area at Best Friends Animal Sanctuary that’s home to cats with mobility and incontinence issues. For some, like Solarflare, it’s due to injury, while others were just born a little different. But they’re all happy and soaking up the love and attention they receive every day from staff and volunteers.

Exercise, physical therapy and other treatments (even some occasional songs) are routine around here, and Solarflare’s progress makes it easy to see why. His treatments might involve a tub of water, tiny needles or even an electric current, but through it all Solarflare is the coolest cat.

For some time, Solarflare has been limited to using his front legs, which causes all the muscles in his back end to atrophy from lack of use. So, since he arrived at Best Friends, caregivers have been working with him by lifting his back end, supporting his weight and letting him move around with a straight back. He takes advantage of the assistance by rushing straight to a better bed or to the kitchen to look for treats. He has a cart that supplies the same support, but he prefers less cumbersome human helpers. Both exercises provide comfortable ways of getting up and moving around so he can work out his front legs and keep them in shape.

The orange cat also loves to sit outside in the sun, and being motivated to get himself to an outside kitty tent helps a lot, too. The red sand offers better traction than the tile floor inside. His routine is to go out through a side door and zoom through the sand to his tent. As caregiver Eric Smith says, “He just likes baking in the sun. Solarflare’s a good name for him.” 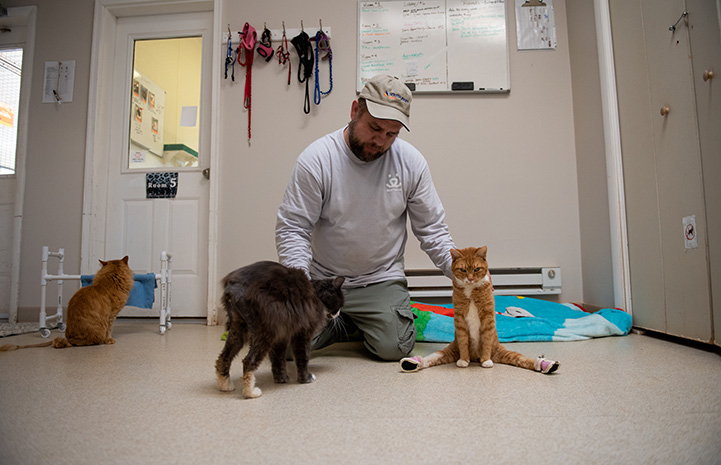 Solarflare’s veterinarian-administered therapy started with short, five-to-10-minute laser treatments twice a week. A deep-penetrating cold laser reduces inflammation, relieves pain and aids in the healing process. These treatments are especially helpful to cats with arthritis and joint pain, and caregivers notice that after a session the cats are more comfortable and their behavior is improved. Solarflare certainly sleeps easier after his appointments (if that is possible).

Solarflare also recently began doing hydrotherapy and he took to it surprisingly well for a cat. The water reduces stress on his joints and a treadmill gets his legs moving and tones up muscles ― things he couldn’t do on his own. “He loves the water," says caregiver Chris Kruse-Wright. “He doesn’t mind baths, and when I’ve taken him to hydrotherapy he just goes right into it.”

Sunbathing and a love for water? Sounds like Solarflare could use a day at the beach.

The treatment that has produced the most dramatic change in Solarflare’s movement is electroacupuncture — acupuncture with the addition of electrical stimulus. It might sound scary, but when administered by a trained veterinarian, the treatment can work wonders. It’s not painful or scary for Solarflare, who lies out on a towel and lets Dr. Chris place the acupuncture needles and attach the electrodes.

Sometimes he takes a nap during the procedure as the electric current works the muscles to help build muscle mass. Thanks to the treatments, for the first time since he lost the use of his legs, Solarflare is enjoying butt scratches (really, really enjoying them), happily flipping his tail around and even (wait for it) going to the bathroom on his own again.

All this is big news for a cat who once had zero use of his back end. Whether Solarflare is chillin’ in the pool, soaking up rays, purring through treatments or simply wiggling his toes, you can’t help but love this extra special guy. And he’ll love you right back.

Photos by Molly Wald and AGOLDPHOTO