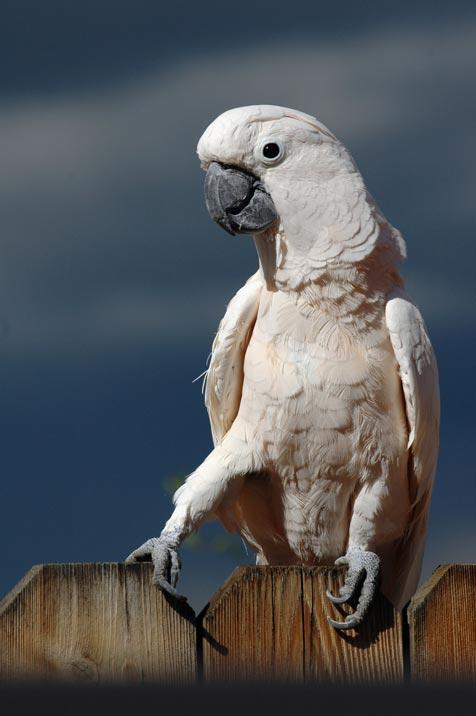 Amazing what a little fresh air can do. Peaches the Moluccan cockatoo came to Best Friends six months ago with a really big chip on his shoulder. He’d been living in an autobody paint garage—no place for a bird!

Parrots have super-delicate respiratory systems. Even scented candles can be disastrous. What, then, can you say about a parrot who was breathing in paint fumes day after day? He was one tough bird, to be sure, but it should come as no surprise that he was in bad shape. A rescuer was able to convince the shop owner to let her take Peaches, but she was unable to find him a permanent home. Not surprising, considering that Peaches was pretty much mad at the whole world.

Some space was available in Best Friends’ Parrot Garden around six months ago, however, so Peaches came to live there. At the time, he was a feather-picking grouch who had no qualms about nipping somebody if that person tried to get close. Lucky for Peaches, the caregivers at Best Friends know how to give an animal his space. He needed some time to decompress a bit and blow off some steam.

Turns out that was exactly the right approach. Even better, progress didn’t take as long as anybody expected. After a few months of glaring at the world with distaste, Peaches started to realize something. People were actually being nice, for real. He stopped picking at his feathers. He started to allow some human contact, then he started to seek it out.

And lately, well, he’s turned into a completely different sort of monster: a camera hog! Seppi the cockatoo might have to watch his reputation as the official ham of the Parrot Garden because Peaches is looking to give him a run for his money. Peaches has found that he loves to dance and show off for crowds. Anything for attention. Really, he’s a totally different bird from before. And young, too, which means he has plenty of time to build up an impressive portfolio if he opts for a career in showbiz.