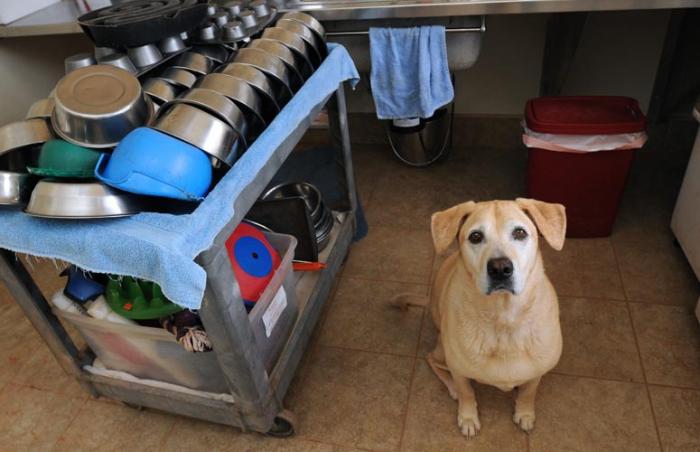 Perfect living arrangements for one dog 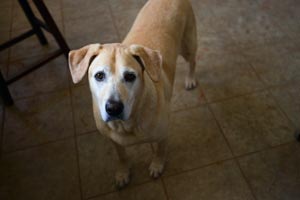 Blondie the dog isn’t a diva, but since she arrived at Dogtown, she’s made it quite clear to her caregivers that she has certain expectations. Who can blame her? She was pampered in her own loving home for nine years. When she lost that home and came to Best Friends Animal Sanctuary, caregivers worked hard to make sure she felt just as spoiled and loved. But Blondie wasn’t having it.

Caregivers tried out a number of places and situations in Dogtown to suit Blondie’s tastes — different buildings, different rooms and different roommates. But the results were the same with each attempt. Blondie wanted something different. She barked and cried in her room and in her yard. She barked furiously when she saw other dogs and people through her gate, and she grumbled at her roommates. She just didn’t like any of the living arrangements she was offered, and she didn’t want to share her space with other dogs.

A perfect arrangement for one dog 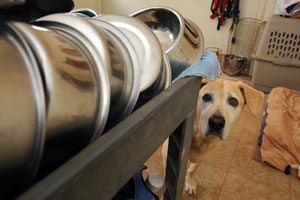 Caregivers were running out of options, but they were determined, and there was one more thing they could try. They gave Blondie kitchen privileges at Angels Lodges (a small section of Dogtown) to see if she would like it better there. There were no other dogs living in the kitchen, so she could have it all to herself. Also, she could be around food, which is her favorite thing in the world. The kitchen is also nice and cool in the summer, and toasty warm in the winter. And, because she likes to be around people, but wants limited petting, the kitchen — where busy Dogtown caregivers and volunteers come in and out all day long — is perfect for her.

Since making this move, Blondie is loving life. She gets plenty of activity to fill her days and has settled into a lively routine. Each morning, she rushes out into her yard to greet caregiver Chris Jasinski when he arrives. Then she gets her breakfast and relaxes while Chris runs in and out feeding the other Angels Lodges dogs. After that, it’s walk time.

Blondie’s back end is a bit wobbly, so she goes to hydrotherapy twice a week. But she still loves to go for 10-15-minute walks, and will bite and tug on the leash when someone picks it up, as if to say, “Let’s get moving already!”

Supervised play dates with other dogs and other enrichment 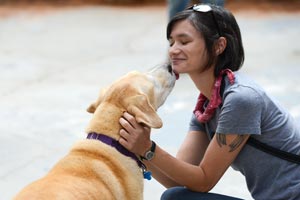 At lunchtime, Chris will often stay in the kitchen and sometimes will sit and read to her. Depending on the day, she spends the rest of her afternoons either lounging on her cushy dog bed or having supervised play dates with other dogs. Chris and the other caregivers are gradually working with Blondie to help her be tolerant of canine companions, so that she may someday be able to live with one. So far, she has played nicely with a number of male pals, and Chris is working on introducing her to some easygoing female friends.

Occasionally, she’ll go on sleepovers with visitors and volunteers, or with Chris. Of course, Blondie is dreaming of the day when she’ll have a home of her own again. For now, however, she’s content to be spoiled by having her very own accommodations that are just right for her discerning tastes.

To help more animals like Blondie get the royal treatment they deserve, become a Best Friends member.