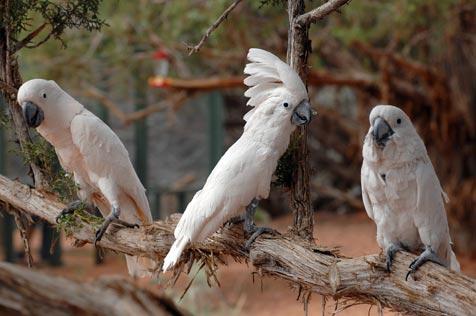 Pet parrot challenges and ending the sale of parrots

Parrots are the third most popular pet in the U.S., and well on their way to becoming one of the most neglected as well, which is why Best Friends convened a think-tank meeting this week to discuss how to improve their lives.

When the Best Friends bird department, the Parrot Garden, completed its expansion in 2004, it took only about a year before its population rose by 400 percent – a good indication of the challenge Best Friends Animal Sanctuary and other animal welfare organizations face in caring for the thousands of parrots who lose their homes every year. Since the expansion, the Parrot Garden has been caring for 80 to 85 birds at any given time.

At the meeting, Parrot Garden manager Suzanne Cordrey stated the two overriding goals of the bird department: to end the parrot trade and to improve quality of life for the birds under Best Friends care.

Thankfully, the U.S. outlawed the import of wild parrots in 1992, but large-scale domestic commercial breeders continue to operate, exacerbating the problem of too many birds and not enough people or sanctuaries willing or able to care for them.

Cordrey pointed out that parrots alive today in the U.S. are, for the most part, the legacy of birds plucked from their natural habitats and sold into the pet trade before 1992. Only a generation or two removed from the wild, they maintain the instincts and needs of wild animals and are therefore ill-suited to spending their lives in cages. It’s one reason so many parrots suffer from neurotic, self-mutilating behaviors and why Best Friends is committed to ending the trade.

Best Friends’ position is that parrots should not be made into pets, Cordrey says. Of course, we are committed to doing what we can for the birds who already are pets and are therefore dependent on people.

"There are people out there who do have good relationships with their parrots," Cordrey says, "but if that relationship should end, those birds will suffer the emotional trauma of separation. And that happens to the majority of pet birds."

Parrots can have a long lifespan, so they are usually passed from one home to another, having, on average, seven to ten different ones in their lifetimes. Unable to cope with one separation after another, many birds end up with more neurotic behaviors, such as feather plucking.

And here’s where Cordrey and parrot caregiver Rick Van Tuyl believe Best Friends can be of special service – by offering a permanent solution for birds who outlive their people. "Most rescue facilities are not set up for longevity like Best Friends is," Van Tuyl says. "There’s nothing like Best Friends in the parrot world."

The Parrot Garden places its resident parrots in three different categories: (1) those who have bonded more to people than to birds, and would therefore be more suited for adoption; (2) those under lifetime care, as per the wishes of their former caregivers; and (3) those who are socially challenged, and don’t do as well among people as they might among other birds.

Cordrey and Van Tuyl consider the last group unadoptable, and better suited for life in an aviary environment. Of course, not all parrots in this group remain that way; they could very well one day become candidates for adoption.

Besides maintaining an enriching quality of life for the birds, the focus at the Parrot Garden is now on finding homes for birds in the first category and making room for birds in the second and third categories. Cordrey and Van Tuyl would like to begin housing the socially challenged birds in species-specific aviaries, where the birds would have more space to exercise and would have greater opportunity to learn healthy behaviors from their better-adapted kin.

Ending the sale of parrots

In conjunction with Community Programs and Services at Best Friends, the Parrot Garden will also begin exploring ways to encourage the large pet store chains to end the sale of parrots, and to instead partner with local parrot rescue organizations and host adoption events.

"Parrots are headed down the same path that dogs and cats have been down," Van Tuyl says, referring to the predicaments of overpopulation, overcrowded shelters and eventual euthanasia. "And Best Friends needs to get in the game before that happens."