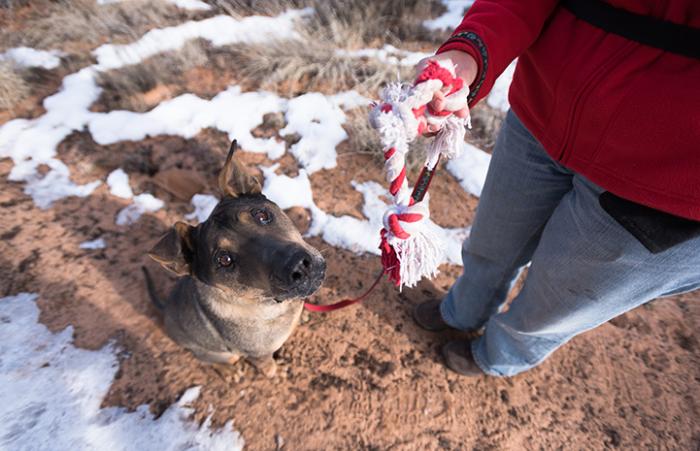 Don’t tell Ruger that toys are just for puppies. The 12-year-old dog absolutely loves playing with them and carrying them around in his mouth. He also loves a good romp in his yard or in the dog park. These are some of his biggest joys in his life. But in order to enjoy them safely, Ruger has had to gain control over a condition called pica that had him compulsively eating things that are not food. 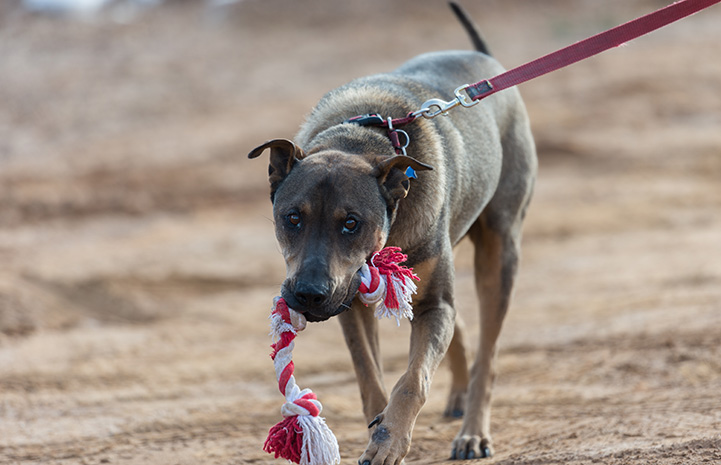 By the time he came to the Sanctuary, Ruger was already a senior who’d likely been struggling for some time with an eating disorder called pica. It seemed that he’d had surgery before to remove life-threatening blockages in his intestines, caused by eating non-food items such as dirt, stones, blankets, towels and toys.

To top it off, the poor senior was found abandoned in an empty house. With the help of a kind neighbor, Ruger survived for several months before he was rescued. Once he arrived in Dogtown, the worst was behind him, but that didn’t mean that Ruger was home free. Because he’ll eat just about anything, any environment he lives in comes with risks. Since the Sanctuary sits in the high desert area of southern Utah, those risks included lots of rocks and sand.

Until his pica could be controlled, there was no way Ruger could play alone in his yard in Dogtown. To stay safe, he needed close and constant supervision from his caregivers whenever he was outdoors. Indoors, his room had to be kept clear of anything (other than food) that he might find tempting to eat, like soft bedding or toys.

Besides the cot-like bed Ruger rested on, his room was pretty bare (and pretty boring) for a dog who loves playing with toys and running around outdoors. So Ruger’s caregivers, along with the Best Friends veterinary team, tried to pinpoint what was causing his problem. That way, they could solve it and add some fun back into Ruger’s life.

Getting pica under control

While rooting out the exact cause of pica is tricky, dietary or digestive issues are sometimes the culprit. To rule those out, Ruger went through two extensive food trials —a hypoallergenic diet and a raw diet. The trials revealed that his pica was unrelated to the food he was eating or how his body was processing it.

As a next step, Ruger was prescribed a behavior modification medication. While it wasn’t a magical cure-all, Ruger soon became a lot less interested in eating things that could make him sick. He was ready to try playing with some durable toys under his caregivers’ watchful eyes.

First, his caregivers gave him a large, sturdy rope toy. “Ruger thought that was the cat’s meow,” says Dogtown caregiver Tom Williams. The silly senior boy was beyond thrilled to have something to play with again. He worked hard to prove to his caregivers that he could be trusted not to destroy and then eat the toy. Instead, Ruger proudly carried the knotted rope around his room, as well as outside on his walks.

That success earned him more rope toys and, eventually, some hard plastic toys such as a jolly ball and a big yellow egg that quickly became his favorite. The egg toy is so large that Ruger can’t pick it up in his mouth. But he paws at it and pushes it around with his nose in his yard when it’s playtime. Finally, Ruger could enjoy toys like a normal dog. 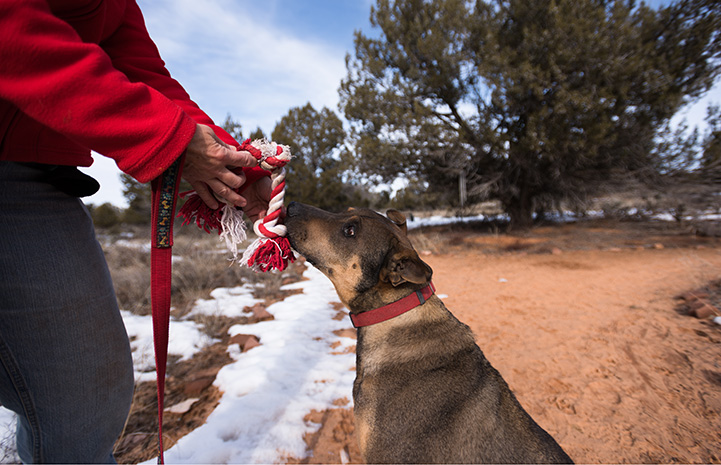 Next, it was time to test out Ruger’s newfound restraint in the dog park. Before each outing, his caregivers walk around the entire park, scooping up all the small toys and tennis balls they find, so that it’s safe for him. “But,” Tom says, “you can count on Ruger to find the one ball in the entire park that you missed.”

So, Ruger learned to make trades. Now, whenever he finds a toy or a tennis ball, he will bring it to his caregivers in exchange for a tasty treat. That way, Ruger helps to make the park a safer place for him. He’s even turned the activity into a fun searching game.

While the friendly senior will likely have to manage his eating disorder for the rest of his life, pica no longer rules his life. His friends at Dogtown figured out the deserving dog’s keys to happiness, and now Ruger can stay safe from harm, while still having a ball. 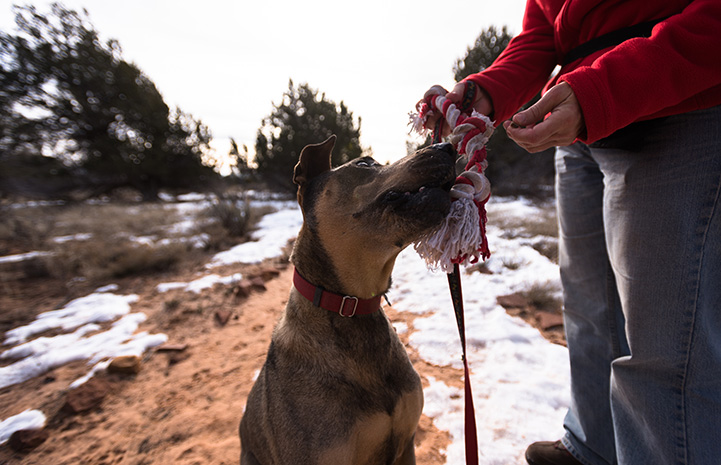 Help dogs like Ruger have more fun in life. Here’s how: