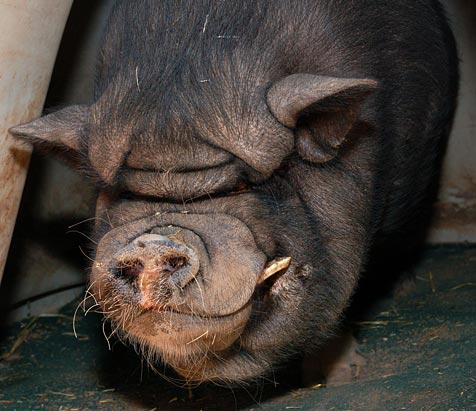 Once upon a time this heavyweight was sold at a flea market when he was only five days old. Five days is way too early for a pig to be separated from his mom. Which means that right from the beginning, Metro the pig had a bit of a lonely start.

Pig on a junk food diet

Things got better for a while with his new family, but then their dogs attacked him (which forever crinkled up one of his ears) and he had to go live somewhere else. His new home fed him nothing but table scraps, which might sound like winning the lottery to a pig. But it wasn’t. Ever heard the phrase "too much of a good thing"? Metro ate everything placed in front of him, from mac ’n cheese to gravy, then licked the bowl clean and asked for another round! The table scrap lifestyle really packed on the pounds, to the point where his belly now almost drags on the ground.

In the long run, Metro’s most recent family didn’t feel they could adequately care for him and so he came to Best Friends, where he’ll have a much healthier life. Metro is definitely the biggest pig in the entire sanctuary. In fact, he’s going into the Guardian Angel program to lose a few of those pounds.

When visitors drop in, Metro is a nice enough guy, most of the time. Just don’t come between him and his food bowl! (And of course, no matter how hard he begs, please don’t slip him a slice of pizza or two.)