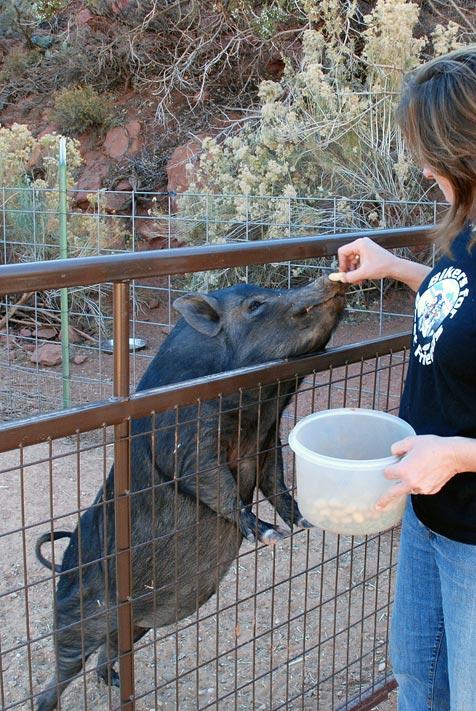 Pig who loves to eat

You can try duct tape. You can try padlocks. But the sad fact is, they're no match for teenage boys determined to pry open a refrigerator door. Teenage pigs are no different. Just ask Jack.

Remember Jack? He’s grown up a little bit since you last saw him, perhaps. (All that love of eating has paid off!) For a time, Jack was the go-to pig for harness walks. Man, did that guy have a busy social calendar. Visitors and volunteers would take him out for walks around Horse Haven, often ending up at the Welcome Center (the part of the sanctuary where visitors can learn about Best Friends and take a tour if they like). And really, who could be more welcoming than a charismatic potbellied pig on a leash? He was always the main attraction wherever he showed up.

Pig with a big appetite

The thing is, he was sort of a pre-teen back then, in piggy years. Now he's more of a full-blown teenager, and a whole lot stronger. Sad to say, he's too big and strong for a harness now. Given Jack's snack obsession, he'd probably drag whoever was holding the leash on a joy ride if he saw something tasty nearby. Gotta watch those cravings. They'll get you in trouble.

His fetish for all things edible has even caused him to lose his yard-mates because he kept bullying the other pigs for their food. Jack isn't mean or anything; it's just that his stomach is a bottomless pit. Approach his play area with a handful of treats and he’ll stand up on two legs, leaning into the fence, to get his precious snack seconds sooner. He's the kind of guy anyone would love to cook for. Talk about gratitude! If Jack had his way, he'd be dragging belly tracks in the sand by now. Thank goodness he has a controlled diet, like all animals at Best Friends.

Yet, his love of food does work in his favor in one respect. Jack can still go on walks, even without a harness. Here's how the new and improved technique works: You place a few peanuts or some other snack on the ground and Jack races over with his built-in treat radar. Then, you pick some other place you want him to go, drop a couple more peanuts, and he's there in a flash. Kinda like real-life dot-to-dot drawings. Hey, at least he's working off the calories at the same time, right?