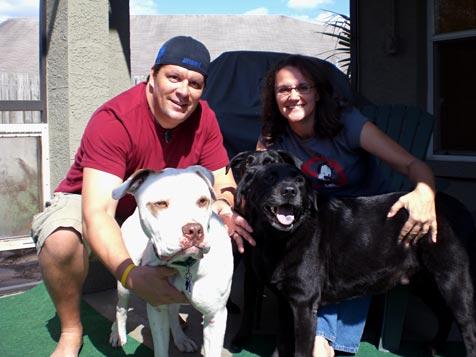 Spuds the pit bull terrier dog has a knack for getting attention. When this guy enters a room, people take notice. It’s just who he is. And at no time were his formidable powers of "Check me out!" more at play than when Spuds first met a visitor from Florida named Dale.

Dale and Jennifer McKeel were visiting the sanctuary for a few days. On their first night, they took a dog on a sleepover. They had a great time, but they wanted to try a different dog the next night. The staff at Dogtown asked if Jennifer and Dale would consider taking a friendly pit bull. No problem, they said. They love pits.

Couple meets the pit bull terrier love of their lives

Enter Mr. Va-Va-Voom. The moment Spuds entered the room, he rushed over to Dale and Jennifer, covering them with kisses. Dale fell in love on the spot. In fact, he was in tears the next day when he had to give Spuds back. It was all they could do not to fill out an adoption application. They would have, in fact, but Dale’s work as an actor has been keeping him out of town a lot more than usual. He was hesitant to bring a new dog into their family (they have two other dogs) with him being gone so often.

So they went home without Spuds. Jennifer could tell that Dale was heartbroken. Dale put a picture of Spuds on his computer wallpaper and everything. After living like this for a while, with Dale still always thinking about his buddy across the country, Jennifer realized that Spuds simply had to be part of their family. To heck with complications, she figured, they’d work out the details somehow!

Still, she couldn’t resist the urge to have a little fun with the situation. Jennifer filled out an application to adopt Spuds—without telling Dale. Her application was accepted and all the arrangements were made. She kept the secret as long as she could, and then called Dale with some "bad news."

"What bad news?" Dale asked. "Somebody adopted Spuds," she answered. Jennifer says that she could hear his disappointment over the phone. She couldn’t take it anymore. "It was me!" she added. Dale flipped out. He was beyond ecstatic. He says that he felt like a kid at Christmas.

It was a happy reunion, indeed. Spuds fits in perfectly with the whole family. He’s best buds with the two black Labs, and of course he and Dale are soul mates. Dale got to spend four days with Spuds when Spuds first came home, and he feels like they’ve had him for years already. His work as an actor still keeps him out of town a lot, but they hope that will all settle down soon.

In the meantime, Spuds has a family who loves him with all their heart. That’s a big step up from his life before Best Friends. Spuds came to the sanctuary after being abandoned in the middle of nowhere. Who could ditch a guy like this? Well, one thing’s safe to say. It’s never going to happen again!

Photos provided by the McKeels