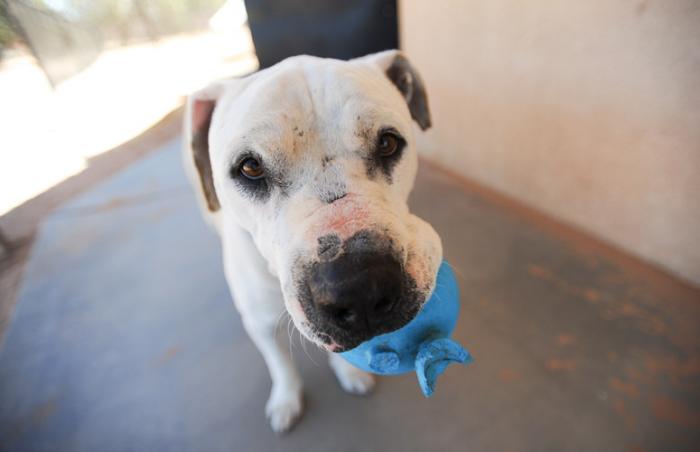 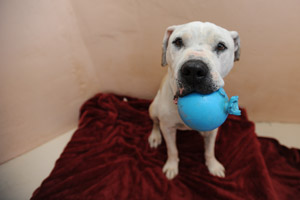 Sometimes the gentlest souls have the roughest exteriors. That’s how it is with Big Bob, a former stray from California. He’s a big, muscular pit bull terrier mix with scars on his hind legs and face.

“People sometimes take one look at Big Bob and jump 10 feet back,” says his caregiver Harlee Day. But those who overlook his appearance soon find out that Big Bob’s tough-looking exterior is really only skin deep.

Big Bob arrived at the Sanctuary with some serious hair loss and skin issues. The veterinary team quickly figured out that the hair loss and unevenness of his coat wasn’t due to mange, or scarring from dogfights, but was the result of a food allergy. Poor Bob was allergic to grains, so he was switched to a grain-free diet, which should eventually restore him to health and eliminate the itchy, bald patches.

In the meantime, his caregivers ensure that Big Bob gets a chance to do what he loves most: Show off his sweet, gentle personality. At the Clubhouse, the section of Dogtown where he lives, Big Bob is the official tour greeter. When the tour bus rolls to a stop in front of the Clubhouse at 11:30 on a Saturday morning, Big Bob stands at attention in his run, stretching his neck out for a better view. Then his tail starts wagging. He picks up his ball and begins running around the yard with it. He knows what’s about to happen next, and he can’t wait.

When Big Bob is led out of his run and up to the latest group of visitors, he walks in a slow circle, sniffing each one respectfully. Then he stops in front of a little boy and lowers his big head. It’s as if he knows he looks intimidating, and wants to make himself appear as small and nonthreatening as possible. The little boy rewards him with a few light pats on the head, and Big Bob moves on to the next person. 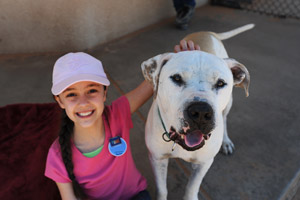 One of those on the tour, 10-year-old Kailey Smith, who recently spent an afternoon volunteering in Dogtown, came to the Clubhouse especially to meet Big Bob. The two spent some happy moments sitting in his yard on his Kuranda bed, soaking up the warm sun. “I’ve seen Big Bob interact with children as young as three months of age,” says Harlee. “It’s as if the smaller they are, the gentler he is with them. That’s why we call him ‘Nanny Dog’ Bob.”

The moniker also hearkens back to a time when pit bull terriers were considered America’s Nanny Dog, and were often entrusted with babysitting young children. Since that time, media bias has greatly damaged the reputation of these dogs and has led to breed discrimination in some areas. But dogs like Big Bob have become great ambassadors for pit-bull-terrier-type dogs just by being themselves.

Besides making new friends, playing with his ball, and sunning himself in the yard, Big Bob’s favorite activity is going on sleepovers with families, where his only vice isn’t his fault. He’s a high-decibel snorer. But it’s nothing a good pair But it’s nothing a good pair of ear plugs can’t help, as well as an endearing quality that makes Big Bob that much more special.

Meet all the adoptable dogs at the Sanctuary.