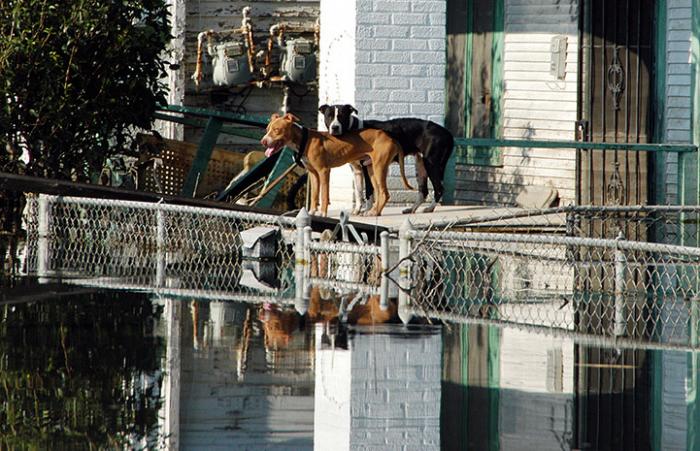 A plan to help people and pets in a disaster

Let’s hope we’ve seen the last of the likes of Hurricane Katrina. But if another Category 4 storm should hit the Louisiana and Mississippi region, a team from Best Friends stands ready, raring and certified to go and help out with the search and rescue of abandoned animals.

Best Friends prepared for next emergency

Best Friends lawyer Russ Mead secured three Memos of Understanding --- a kind of permission slip to gain entrance into counties and cities to assist during emergencies --- with Jefferson and Livingston parishes in Louisiana and several municipalities in southern Mississippi in the event of a natural disaster.

Last year, members from Best Friends traveled to and from devastated Katrina sites for ten months to aid in animal rescue operations. The game plan for future episodes calls for search, rescue, secure and leave.

The scaled-down involvement is possible partially because of the harsh realities experienced during the hurricane. It became clear --- sometimes deadly clear --- people would not evacuate without their pets. Just in time for this year’s hurricane season, Louisiana passed the Pet Evacuation Bill.

"The passage of the bill helps our cause," said Russ. "But we still need plans of action to make sure the animals remain safe if another hurricane comes through."

The state, under the umbrella of the Federal Emergency Management Team, also has plans in place should the worst-case scenario occur. The blueprints call for animals and people to be moved to four large staging areas inside Jefferson Parish before going to an undisclosed number of far away shelters. When a mandatory evacuation order is issued, buses would be required to transport people and their animal companions to these areas.

But some areas still reeling from the aftermath of Katrina have decided to make their own arrangements. In Jefferson Parish for instance, the residents can feel secure in knowing their animal companions have safe haven in a building to be used solely as an animal shelter during a disaster.

"The building is a huge concrete warehouse structure that didn’t suffer any damage in last year’s episode," said Russ. "It should provide more than adequate shelter as needed."

Offering help to people and animals

If the need arises, Best Friends employees would arrive on the scene to travel by foot, car or boat to locate abandoned animals and bring them to the safety of the shelter. A few members may stay in the area to help for awhile, but the time frame would be weeks instead of months.

A different kind of MOU was reached with Livingston Parish. Senator Fontenot, a resident of the parish, asked Best Friends to draft their animal evacuation plan. As of this writing, Russ is still working out the details.

Rural Livingston comes with its own set of topographical challenges: Just north of Lake Pontchatrain, the area is swampy and floods during even moderate storms. In addition, there’s no animal control shelter or personnel to deal with any potential disasters.

But the area covers a lot of land, including a fairground area suitable for staging large groups of animals. "With no animal shelters or animal control officers, we can make a real impact in this rural area," said Russ.

The third Best Friends MOU covers several municipalities under the Humane Society of Mississippi. Should our presence be needed, Best Friends will help out with search, rescue and placing the animals in existing shelters.

"Let’s hope this is all a hypothetical situation," said Russ. "But if any of these places need us, we’ll be there and we’ll know what to do."