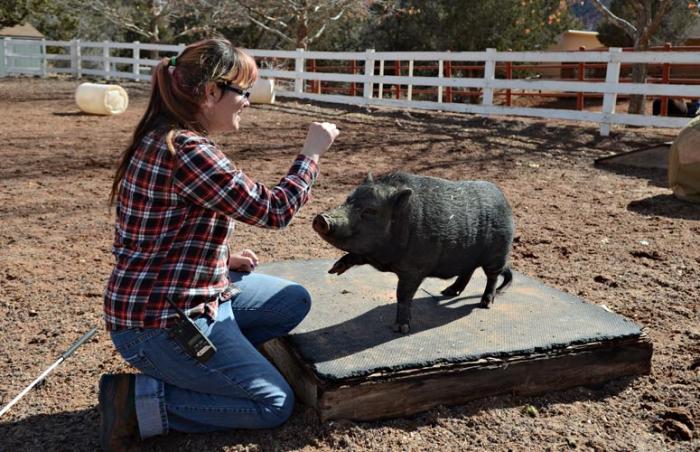 Marshall’s Piggy Paradise is a place where pigs bask blissfully in the warm desert sun, root around in the soft ground with their porcine pals, and stretch out on their sides to enjoy belly rubs from caregivers and volunteers. Looking at the idyllic scene, it’s hard to believe that many of these pigs came to Best Friends Animal Sanctuary lacking the crucial social interaction and mental stimulation that makes them so easygoing and adoptable. 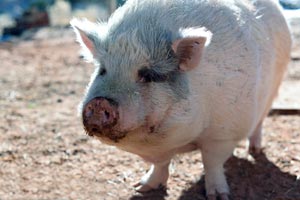 Take Oliver for example. The seven-year-old potbellied pig was purchased at a pet store and spent the first five and a half years of his life in a small enclosure, without any toys or other pigs. His people weren’t trying to deprive him, but they didn’t know that he would grow so big, or that pigs really need to interact with other pigs. Because his needs weren’t being met, Oliver became bored and frustrated, which made him a difficult pet.

Since he arrived at the Sanctuary, caregivers have been working to help him release his pent-up energy, so he can be happy. “Oliver is one of our most intelligent pigs,” says caregiver Adria Johnson. But he was never taught how to put that intelligence to good use. Instead, he picked up some dangerous habits, such as bolting out of gates. So Adria decided to teach him some more constructive games. These games are part of Parelli Natural Horsemanship, a horse training program that is easily transferable to pigs.

Games and training treats for pigs

In some ways, Oliver is like most pigs. He’s very independent and resistant to anything that seems too challenging. Why should he bother to play someone else’s game when he’s smart enough to make up his own, whether people like it or not? But he’s also unable to resist the pumpkin, oatmeal and apple juice cookies that caregivers bake for training treats. Adria has used these treats, along with a tool called a carrot stick, to teach Oliver how to sit down and turn around. The carrot stick acts as an extension of Adria’s arm, and is used to apply gentle pressure to Oliver’s body.

The technique has already helped Oliver master some important life skills, such as getting into a transport crate on his own. In the beginning, every time he looked at the crate, or took a step toward it, Adria stopped applying pressure with the carrot stick. He soon identified the crate as a comfortable and happy place where he got plenty of treats. 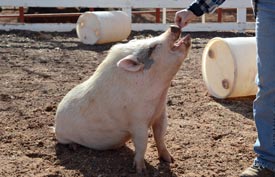 Besides Oliver, caregivers are also working intensely with his fellow potbellies, Rupert and Tobias. The games provide Rupert with the mental stimulation he needs to feel happy and fulfilled. He quickly learned how to sit and shake. He can walk in figure eights, and even climb up and balance himself on a giant training ball. These successes have helped him shed his natural shyness and fear of the world. He’s gained plenty of confidence and trust in his caregivers.

Tobias, on the other hand, isn’t shy. He’s preparing for an active and social lifestyle. Caregivers have already trained him to get into a car. In fact, if Adria wants him to get into the car or to stand in a particular place, all she has to do is point, give the cue, and Tobias willingly goes right to it.

Although they’re smarter than the average pet, Tobias, Rupert and Oliver don’t know these games have the specific aim of working their minds and teaching them skills that make them more adoptable. All they know is that the games are fun, the people are trustworthy, and the treats are yummy. And that makes for some very happy pigs.

Since this article was written, Tobias has been adopted. However, Rupert and Oliver are still waiting to take their show on the road in a new home.

Learn more about Marshall’s Piggy Paradise and the pigs who live here.