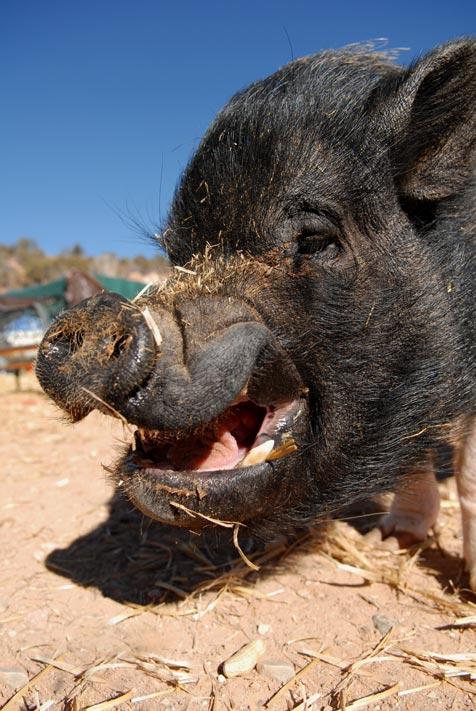 The first pig of the fabled three from the fairy tale, the one who built his house out of straw, might have been onto something. True, his home didn’t prove as structurally sound in gale-force winds as did his brother the mason’s, but it’s a fair bet that the straw home was a whole lot cozier! Just ask Rex, the new potbellied pig in Piggy Paradise at the sanctuary.

Rex lived with his family for 17 years, ever since he was a young piglet. In all that time, he had blankets for bedding, but no straw. Not so uncommon: Plenty of animals cruise through life healthy and happy without straw bedding. But for pigs, there’s just something about the stuff. And once they’ve tried it, there’s no going back!

Rex came to Best Friends after his family could no longer meet his needs. He’s an older pig who will need special care in his advanced years. Only you wouldn’t think this guy is a senior citizen when you meet him. He has enough gas left in the tank to give pig manager Yvonne McIntosh a run for her money. Despite his feistiness, though, he does seem to appreciate his new digs. One of his greatest loves so far has been the straw. His comfy igloo is full of the stuff. Rex likes to stay inside so much that some days the best you can hope for is a quick "Rex sighting."

Something else he seems mighty pleased with is the salad-bar menu. Like many pigs, Rex ate mostly pellets before. Breeders and pet stores often pass along that advice as a healthy way to feed pigs. Not so. They need their greens! And boy, does Rex love those fruits and veggies!

Rex’s goal now is figuring out how to combine a brick exterior, straw interior, and veggie buffet into one perfect experience. (Upcoming piggy mini-bar, perhaps?)

You can learn more about caring for pigs in our online resource library.