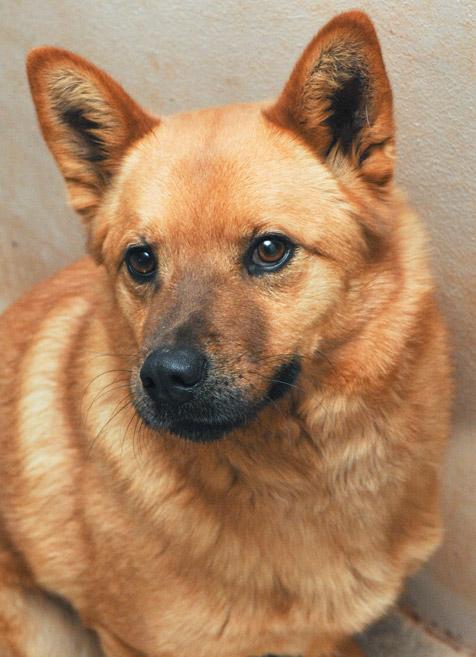 Once upon a time, Buster the dog was rescued as a stray alongside the highway. In something of a twist of fate, life has since come full circle for him. Now he's the one doing the rescuing.

Shortly after Buster came to Best Friends to make a new start in life, staffers immediately noticed his good manners and incredibly sweet disposition. "Everyone had good things to say about him," says Best Friends animal behavior consultant Sherry Woodard.

Buster sounded like an ideal fit for a very special niche. Sherry had been looking for a psychiatric service dog in the Best Friends' Canines with Careers program — specifically, a dog to assist military veterans, many of whom are living with post-traumatic stress disorder (PTSD). 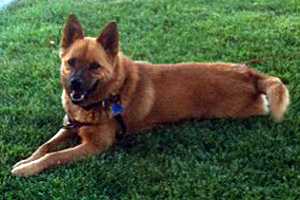 Buster is a natural.

Sherry decided to start training Buster to see how he'd do. One of the first orders of business was to test his confidence level in a variety of situations, such as walking on different flooring surfaces and visiting public spaces and businesses. As a service dog, he would need to be comfortable going just about anywhere. Buster sailed through with ease. "Everything I tried he was fine with," Sherry says. "He was fearless."

From there, it was time to start training him in some of his future tasks. One big task was learning to always check in with his handler. Buster's job would be to always look at his person, stay in contact, and make sure they're doing OK. "These things are important to any one of our veterans," Sherry says.

In the end, Buster aced every piece of his training. The thing is, though, he made it easy. He's a natural. "Great dogs like Buster can be found in shelters everywhere," Sherry is quick to point out.

Dog for a military veteran with PTSD

Once he was ready for service, it didn't take long to find the perfect match. Ted Martello, a military veteran living in Nevada, learned about the program and thought it might be just the thing to help him. He got in contact with Sherry and met Buster shortly thereafter. He felt a strong connection with Buster immediately and decided to adopt. "He's been doing his job since day one," Ted says. 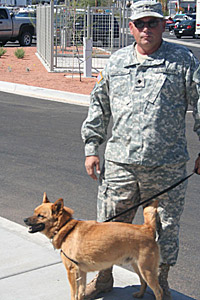 Buster and Ted are a team.

Ted, who has PTSD, explains that one of the recurring symptoms for him (indeed many veterans) is nightmares. Sure enough, the very first night together Buster woke Ted from a nightmare, comforting him. He's done that ever since. "I actually sleep better at night," Ted says.

Buster also does his job during the day, offering comfort and affection whenever Ted needs it. "He picks up on my mood," Ted explains.

Dr. Lisa Lunghofer, a consultant living near Washington, D.C., has been working with Sherry and tracking the success of the Canines with Careers program for over a year. She's been interviewing veterans like Ted, and has been consistently amazed at her findings.

"The dogs really have changed people's lives in ways I don't think even they were expecting," explains Dr. Lisa. Many of the veterans she has interviewed, for example, didn't want to even leave their own home. Now they feel like they can experience the world again. "That alone has been a life-changing opportunity," she says.

As for Ted, he actually attends a military PTSD support group on a regular basis. They all wanted to meet Buster, so Ted brought him for a meeting. Buster was an instant hit. They all loved him at first sight, and he loved each of them right back.

"Everybody wants to steal him from me," Ted jokes. "He does his job well. He keeps me grounded."

Photos by Best Friends staff and courtesy of Ted Martello