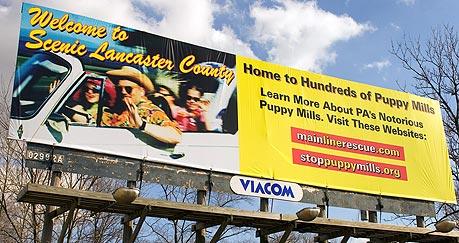 The dark side of the purebred dog business is dragged into the sunlight through a series of billboards.

The billboards use sarcasm as a weapon and were put up in Missouri and Pennsylvania by Main Line Animal Rescue. Bill Smith, founder of Main Line, said the billboards will be up for a year.

A '50s-style photo of a happy vacationing family in a convertible welcomes passing motorists to Lancaster County, Pennsylvania: "Home to hundreds of puppy mills." Lancaster County has probably the heaviest concentration of puppy mills in any county. The billboard was designed to catch the eye of the tourists who come to "Dutch Country" to see the picturesque Amish and Mennonite communities.

Another billboard is outside St. Louis, Missouri before the Sullivan Exit on I-44. Missouri has the highest concentration of puppy mills of any state, Smith said.

"More billboards are planned for Kansas and Oklahoma. MLAR wants to educate as many people as possible about the horrific conditions in the large scale dog breeding facilities known as ‘puppy mills.’

Since their appearance in March, MLAR has received thousands of supportive calls and emails from across the country, Bill reports. "We have been contacted by many people who were planning to visit Lancaster County on their vacations this year, but have canceled after reading about our boards in the Philadelphia press," he continues. The first substantive impact of the billboards is that Lancaster County formed a special commission to look into the problem.

"A new bill has been introduced into the Pennsylvania Senate and the House to regulate the sale of puppies over the Internet and directly to the public through newspaper ads. I have been on radio programs with the legislators responsible for introducing the bill, discussing the legislation and our boards," Smith said.

The billboards are great attention-getters but not the primary focus of Main Line Animal Rescue. This small Pennsylvania rescue organization specializes in the placement of abused and neglected companion animals. On the average, there are 75 dogs, cats and other animals. MLAR has a 98 percent placement rate and they specialize in animals with special needs.

"We should all focus on the positive and MLAR works very hard to support other rescues and shelters. Over 70 percent of our animals come from other shelters and SPCAs when their time is up and or if they need special medical attention. The rest are private surrenders.

"We are also huge believers in the value of training homeless dogs to make them more adoptable. MLAR has taken hundreds of dogs through obedience courses stressing positive reinforcement and desensitization. We don't have an adoption fee, instead we ask adoptive families to enroll and complete a six week training course.

"We believe, as does Best Friends, that every animal deserves a chance."

Now if only the puppy mills are shut down, and the imprisoned dogs and their pups get their chance at a happy home, Bill and all of us will be ecstatic.

Read about how to put an end to puppy mills.