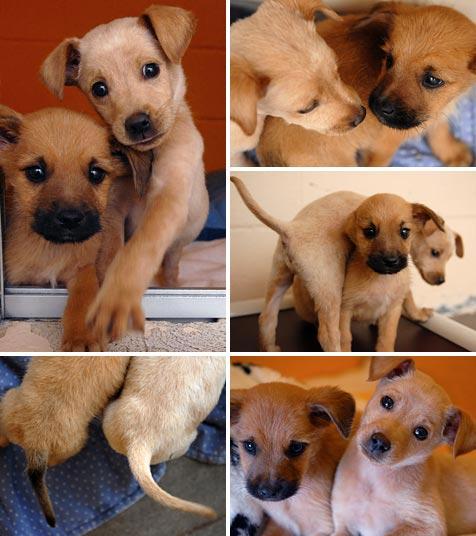 When you’re small enough to fit through the narrow gap in a chain-link gate, it’s pretty easy to get sick if you’re not getting the right care. Two new puppies at Best Friends are feeling a whole lot better these days, but they sure weren’t happy campers in the beginning.

Nuvi and Tom Tom were found as strays in a rural part of northern Arizona. They had ticks down in their ears and both dogs were way too skinny. A stiff breeze would not only have knocked these pups over, it could’ve carried them up and away! In fact, Nuvi was so dehydrated by the time she came to Best Friends that the clinic had to keep her on fluids for a whole week.

Still, they had some fight in them. The kind of fight it takes to get better. In no time at all, Tom Tom and Nuvi started to show their feisty sides. Which posed a problem once they learned they could squeeze through their gate if they worked at it hard enough! (Hey, when you’re a puppy, you better jump at the chance while you still can.) Thank goodness their play area is double-fenced, so their adventures never took them far.

Really, though, the caregivers are thrilled to see a mischievous streak surfacing in those tiny little bodies. It’s proof that both puppies are feeling much better than when they first arrived. Things are looking up. Now if they can only figure out how to unlatch a carabiner clip…

You can help Best Friends care for more puppies like these when you donate to the new Puppy Care Center!