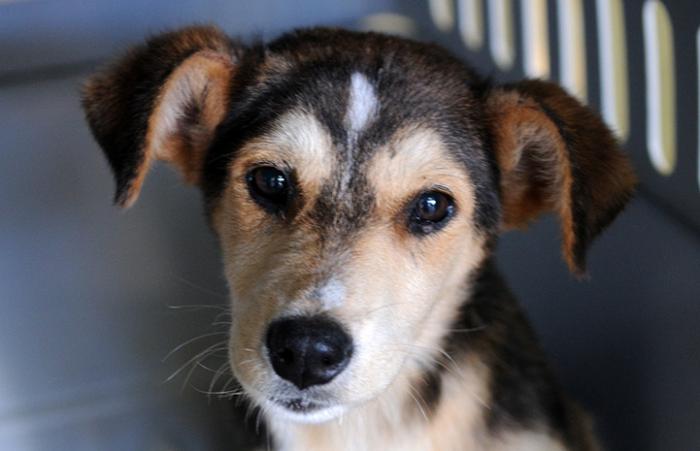 Puppy recovers from sarcoptic mange and is adopted

Completely covered with sarcoptic mange and without fur, little two month old Cody was just a tiny, pink-skinned puppy when Best Friends staffers found him in a small crate in the ISO Ward at East Valley Shelter.

We quickly transported him to Brent-Air Animal Hospital, where he was immediately quarantined and major treatment commenced to get rid of the mange, as well as to prevent infection due to the frail condition he was in.

Within the next four weeks, Cody held his own as his fur started growing back, and the mange slowly left his body. He started gaining weight and playing like a normal puppy. At the end of two months at the vet hospital, he was finally ready to come home.

His appearance the following week on FOX TV'S "Good Day LA" morning show, completely overloaded our phone message line with fifty to sixty people interested in adopting him. At the same time, his up-for-adoption profile on PetFinders.Com also caused an overwhelming response of potential adopters. We had never had such a huge interest in any one dog before.

Puppy adopted into a perfect home

The next two weeks were spent with the Best Friends LA staff interviewing applicants, doing home checks, and trying to figure out the very best home for Cody, as there were so many wonderful people and homes to choose from. Finally, after much painstaking deliberation, Renee Ruppel and her fiancee Darren Muren were chosen as Cody's new forever family.

Cody now lives in Poway near San Diego, with a huge yard, a pool, a house to play in, and all the love he can possibly get from Renee and Darren. Talk about a happy ending!