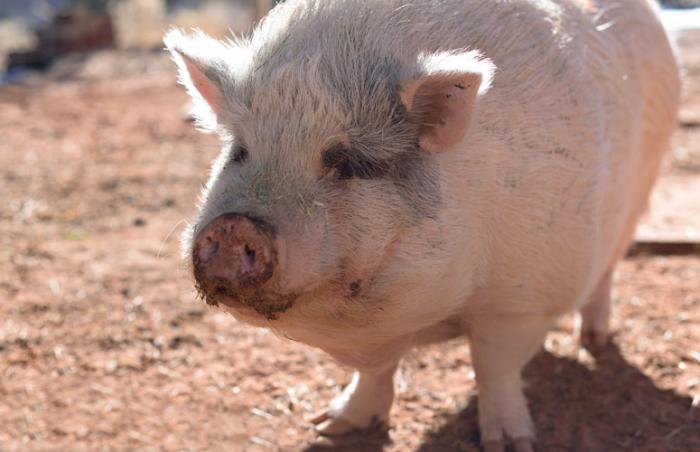 Really big (but not fat) pig

Friendly, outgoing Oliver the pig (whose full name is Oliver Fig Newton John) doesn't mean to call attention to himself. But when he arrived at Piggy Paradise back in January, everybody noticed him. And everyone still does. For one thing, Oliver, who weighs in at 236 pounds, is uncommonly large for a potbellied pig. But no one's talking about a diet for him because he isn't overweight; he's just a big boy. He's strikingly handsome, too, with a delicate and somewhat unusual pink and white coloring.

Protecting a pig from the sun 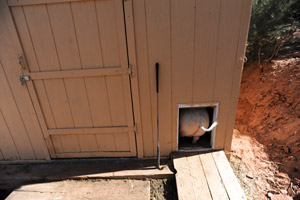 Because he's so fair, Oliver should be wearing sunscreen under the hot desert sun. But every time his caregivers have offered it, he's politely declined. So Oliver has to spend the hottest part of the day (usually from 10 a.m. to 3 p.m.) under the sun screens stretched over the wooden beams behind the Piggy Paradise office. In the large, enclosed space, Oliver spends his time chasing errant sunbeams. When he finds one, he'll stretch out in it and roll contentedly onto his side. If he's close enough to the gate, he'll even let you give him a good scratch behind the ear while he basks in the warm rays.

In fact, Oliver loves visitors and has a habit of strolling right up to greet them.

Sometimes they are a bit taken aback by his curiosity and confidence, coupled with his size. But Oliver wants to make friends, not to intimidate people. It's true that when the five-year-old pig first came to the Sanctuary, he wasn't so well-adjusted. He was actually a little defensive and aggressive at first because the transition was difficult for him. Oliver had been a beloved family pet for a long time, but when his family no longer had the means to provide for him, they surrendered him to Best Friends. 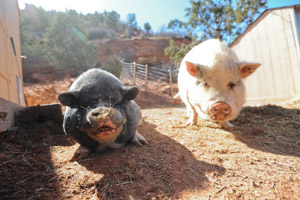 Poor Oliver must have felt confused and lonely at first. But these days, he is showing everyone what a big love bug he is. Besides visitors, he loves volunteers and has become the go-to pig for them. He particularly enjoys going on walks, but will also lie down and surrender to a good brushing for hours on end. Oliver's even got a new friend in Piggy Paradise, an older pig named Teddy, of whom he has become rather protective. Often, the two can be found napping peacefully together. And, while Oliver may be dreaming of a home of his own during those leisurely naps, he knows he'll have plenty of time and opportunities to make new, and hopefully lasting, friends.

Learn more about Oliver or any of the other adoptable pigs at the Sanctuary.

Volunteer in Piggy Paradise or one of the other animal areas.