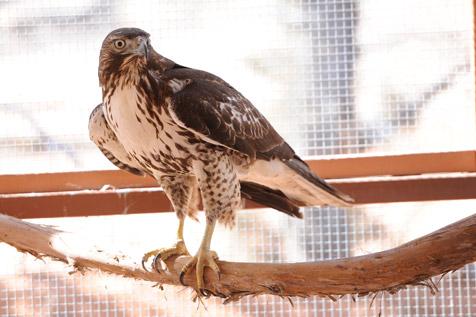 The red-tailed hawk flies gracefully up to the ledge, then down again onto a perch, which she grasps easily with all her toes.

The aviary is a good size for a recovering bird. The hawk has room to fly, though she will soon move up into the large flight aviary in preparation to be released. It’s almost spring. The weather is sunny, and there is a sense of peace and tranquility at Wild Friends, the licensed wildlife rehabilitation center at Best Friends.

Grasping a perch with all her toes may not sound like much, but it’s an amazing accomplishment for this hawk who arrived with a badly broken toe.

A red-tailed hawk who couldn’t stand up

On November 22, 2011, people spotted the hawk outside a local business, along the highway, just to the east of Kanab. Early that morning, she wasn’t standing or moving, though she’d struggled to her feet once or twice.

When she hadn’t flown off by late morning, the people watching her knew something had to be done, so they called Utah Division of Wildlife Resources conservation officer Zed Broadhead, who picked her up and transported her to Wild Friends.

Todd Moore, wildlife rehabilitation subpermittee, recalls that the first toe on her right foot was "hugely swollen." Her feathers were frayed from trying to prop herself up with her right wing. She wasn’t thin, so the accident was recent. Maybe she had flown into a window or the windshield of a car? An X-ray confirmed that her toe was very severely broken, but a careful examination revealed no other injuries.

Now, a broken toe to a human, especially one with an office job or who spends a lot of time sitting, can be painful, but it isn’t normally life-threatening. But for a bird, it’s a whole different matter. A wild bird needs every part of his or her body to be working for survival — and the toes not only grasp branches for perching, they’re also necessary for obtaining food. So, a broken toe isn’t just painful — it’s a life-or-death issue.

The Wild Friends team went to work to give the beautiful hawk the very best care. She was put into a small, darkened cage so she would be quiet and not tempted to move about too much, which could cause further injury. She was given pain and anti-inflammatory medications, fluids, and kept warm. (All sick or injured birds need adequate warmth.)

Her toe, which had no external wounds, was bandaged to keep it motionless so that it could heal. Within five days, she was able to stand, even putting a little weight on her right foot. She was moved into a roomier cage, where life was definitely more exciting.

Hawk on the mend

One month later, the bandage was removed for good.

At the end of January, having made fantastic progress, she spent a few days being acclimated to the winter cold, then she was moved into the outside aviary, where things have begun to look a whole lot rosier.

She watches clouds in the blue sky, listens to the peaceful singing of other birds, and spreads her wings in flight. Life is going to be OK again. Soon she’ll be up in the huge flight aviary, the last stage before being released back to live her life in the wild just in time for a joyful spring.

What to do if you find an orphaned or injured bird