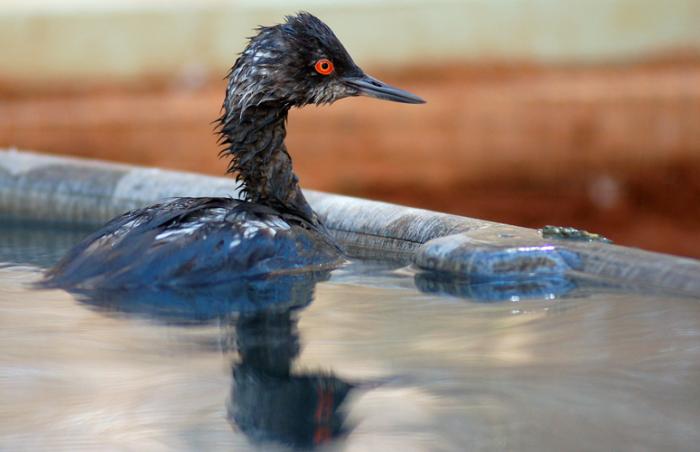 A bird landing at a gas station doesn’t at first sound like cause for alarm. But when a bird did just that at a station near Best Friends and then simply sat on the pavement without ever attempting to fly off, onlookers knew something wasn’t right.

They called Best Friends for help, and soon a Wild Friends staff person arrived and identified the bird as a grebe. That explained why he hadn’t flown off and why he would need help from Best Friends.

A grebe bird out of water

Grebes are water birds, and because of the way they are built they can only take off from the water, not from the ground. From high overhead, any kind of black road pavement looks just like a river to them. So if they’re blown off course on a windy day, they’ll often land on a road, mistaking it for a river. Then they can’t get back into the air again and must be rescued by a licensed wildlife rehabilitator, who can examine them to be sure they’re not injured and transport them to a suitable body of water where they can fly away again.

The grebe from the gas station showed no signs of injury when Carmen Smith, Best Friends’ licensed wildlife rehabilitator, examined him. He was just fine, though not too happy to be in captivity. When Carmen took him out into the water to release him, he refused to turn his back to her and swim out into the water — just in case she might be some sort of dangerous life form. (You never know, really.) She carried him farther out until finally he felt safe. He began to preen his feathers, and then he sailed happily away.

The bird’s safe release was due in part to the man who first alerted Best Friends to his presence at the gas station. He knew just what to do, because a few weeks earlier, he’d been working at the local airport in town when he spotted a bird stranded on the pavement. When Carmen arrived to rescue the bird, the man said, “You’ll never catch that bird.”

But Carmen has plenty of experience nabbing hard-to-catch birds. With a net in each hand, she walked up to the bird and scooped him up, catching him neatly when the two nets closed around him. It was all done in an instant. After a trip back to Wild Friends for a physical exam to ensure that he hadn’t suffered any injuries, the bird was released, safe and sound, at the wading ponds beside a water reservoir.

Another grebe in need of help

Local grebes have been keeping Best Friends busy lately. The day after the grebe from the gas station was released to watery freedom, another call came in — this time to help a bird who landed in the road outside a nearby restaurant.

After Carmen determined that the bird was fine and good to go, Wild Friends caregiver Bobbie Foster took the bird out to the ponds near the city reservoir, just as the sun was setting on a beautiful late afternoon. The grebe stood for a moment poised atop her transport carrier, and then, making a decision, she flew out onto the water and sailed away amidst a great crowd of water birds, including several other grebes just like her.