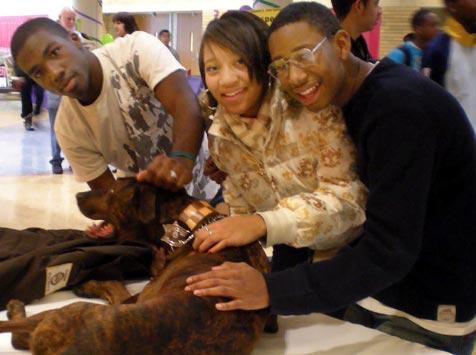 While many young people spend their spring break in ritual debauchery on Florida beaches, a group of Chicago teens who support animal welfare held a carnival at their high school to raise money for a trip to Best Friends Animal Sanctuary.

Over the past two semesters, the students had learned a lot about Best Friends – the national sponsor of SHC – through videos and visits from some Best Friends staff, including John Garcia, one of the stars of "DogTown," the popular National Geographic Channel series about the work we do at the sanctuary with abused and abandoned dogs.

"These high schoolers are savvy, innovative and willing to do what it takes to be successful," says Cynthia Bathurst, principal director of SHC. "They created a carnival that not only made some money but also raised awareness in their own school about what ‘safe humane’ means in a community."

The students set up ticket and food sales and game areas for people to play Rock Star video, Twister and Pin the Tail on the Dog. They also set the stage for the star of the event, Elliot Ness, the rescued pit bull who became a member of the Cook County Sheriff’s Department.

Ness’s partner and human companion, Officer Deb Thedos, showcased him at a meet-and-greet table. His tail never stopped wagging while adoring fans stopped to pet him.

Support from the Chicago Police Department

Also in attendance were Sergeant Mark George, Officer Jennifer O’Shaughnessy and Officer Mark Trost from the Chicago Police Department’s Animal Crimes Team. "It’s encouraging to see so many young people taking such interest in animal welfare," George says. "Getting information to these children living in these at-risk neighborhoods is key to helping us decrease the instances of dog fighting in Chicago."

Youth leader Keli Walsh brought her mom, Jo, and younger brother Dylan to the carnival. Jo says she was impressed with the education Keli has received through the SHC youth program. "When I’d hear a news story about dog fighting or animal abuse, I’d go and talk to Keli about it. She’d tell me, ‘Mom, I know all about this. I’ve met kids whose relatives participate in dog fighting; you have no idea what we’re up against.’"

For the past two semesters, Keli and her colleagues, along with dogs and their handlers, have visited six inner-city grammar schools to present the SHC Youth Leader program to 719 students and 55 principals, teachers and staff.

The teens teach their audience the importance of treating animals humanely, demonstrate how to approach companion dogs and how to behave around stray dogs, and talk about the dangers of dog fighting.

A trip to Best Friends, where the youth leaders can spend their days volunteering and playing with the animals at the sanctuary, would be a wonderful reward for their hard work.

"I can’t wait to go," says Keli. "From what I’ve seen on the videos, the place looks awesome and most of the animals look so happy. This will be a trip of a lifetime."