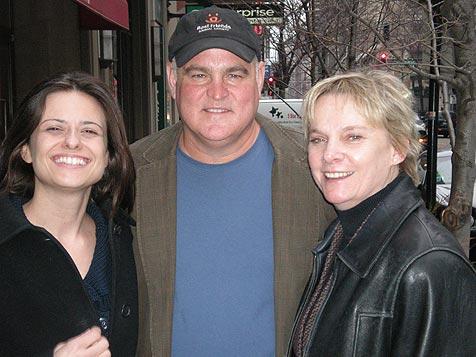 Best Friends Animal Society has stepped up to become the sole national sponsor of Safe Humane Chicago, an initiative designed to end dog fighting and violence toward animals and people.

Bringing together nearly 60 groups, including government agencies, animal welfare supporters and community advocates, the project will be introduced in Chicago neighborhoods where violence is most prevalent and resources most scarce.

Cooperation is the key to the program’s success, according to Melia Carter, the other co-founder. "Our goal is to create a movement of compassion that stops the violence associated with dog fighting and animal abuse in its tracks. In order to do that, we must have a ‘big umbrella’ and work with people that may hold different philosophies than our own on some issues, yet share our common purpose to end dog fighting and other forms of violence. Rather than exploiting our differences, we must embrace our commonalities and create real change."

Paul Berry, Best Friends chief executive officer, says the partnership is a perfect fit for us because it mirrors our mission: To change the way people relate to animals, nature and each other by promoting kindness and compassion. "We’re very impressed," he says, "with this unprecedented coalition of leadership here in Chicago. We want to do everything we can to ensure its success here."

Members of the coalition include the mayor’s office, the police department, the Chicago Commission on Animal Care and Control, Chicago Veterinary Medical Association, Chicago Animal Shelter Alliance, Alliance for Community Peace and a 500-member alliance of ministers.

"With the Best Friends alliance, Safe Humane Chicago will greatly expand its programming of education and caregiving to reach all population segments – kids, teens, and adults, especially in at-risk communities," Bathurst says. "We will also continue our extensive court advocacy program and other activities that assist law enforcement to positively impact arrests, prosecutions, convictions and remedies for situations involving animal neglect, abuse and fighting."

Carter adds, "The Safe Humane Chicago program is unprecedented in that it pulls together the entire community to effectuate change where the roots of violence are formed. We cannot forget that some of the ultimate beneficiaries of the Safe Humane Chicago program are the animals that suffer every day from the senseless violence that occurs in neighborhoods and homes across the country."

Best Friends plans to add a key component to the program by establishing a community animal hospital that would offer low-cost veterinary care and spay/neuter procedures as well as education and recreation programs to further the agendas of compassion and kindness toward animals and people. It would also serve as the hub for all Safe Humane Chicago programs and initiatives.

"The hospital would provide the ‘bricks and mortar’ and needed resources for our programming," Bathurst says.

Best Friends intends to adopt the Safe Humane Chicago model for other cities.

"No one is building animal hospitals in at-risk communities," Berry says. "This has never been done before. And it’s time. We want to offer these important services and community programs to those who need them the most."

Learn to practice kindness early, and practice kindness throughout your life. The children's initiative teaches the importance of compassion toward animals. The participants also learn why dog fighting and animal abuse is wrong. Children interact with instructors and dogs to learn the proper way to approach and treat dogs as well as how to avoid dog bites and attacks. They also learn how much fun they can have working with agility dogs.

You're never too young to be a leader. This program trains high school students to become Safe Humane Chicago presenters. The teens mentor younger children on why compassion toward animals is important and why dog fighting and animal cruelty are wrong. They also guide the youngsters on how to treat their own animals, approach animals on the street, and avoid dog bites and attacks. The first members are currently enrolled at Walter Payton College Preparatory High School and will become the first official teen SHC presenters when the class ends in May.

This program is for adults who have good intentions, but may not know all the facts. It's All Connected educates adults in targeted communities on the issues of dog fighting and animal abuse and also promotes proper care of animal companions. The program emphasizes the connection between violence toward animals and violence toward people, and the need to stop dog fighting at its source. People learn to watch for and report instances of dog fighting and animal abuse. Participants will also be given access to community resources for training, care and low-cost or free spay/neuter clinics.

It's never too late to change. This program helps turn around the lives of teens and young adults who have been involved in dog fighting. By instilling the importance of respect and compassion toward all living creatures, Lifetime Bonds presents a positive role model for participants to follow. The program provides the necessary tools, encouragement and education to stop violence toward animals.

The goal is to identify, arrest and convict animal abusers and dog fighters. In partnership with Chicago's community policing network and the Chicago Police Department, participants provide training, logistical support and appropriate interventions for situations involving animal neglect, abuse and fighting. One integral part of this initiative is the Court Advocacy program. Since 2000, more than 700 people have signed on to volunteer as court advocates for the prosecution in cases involving animal abuse.