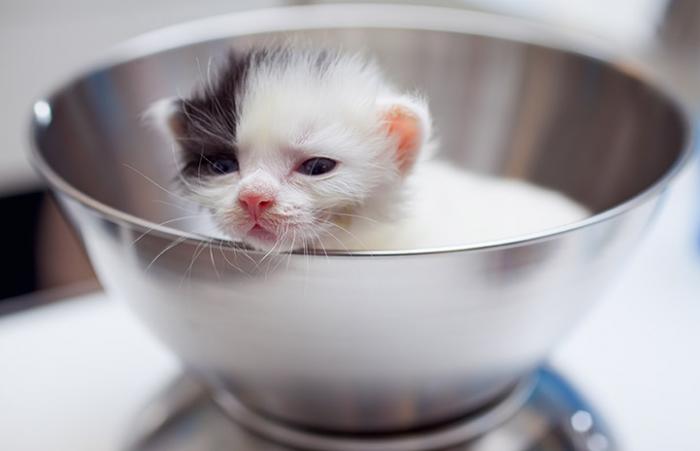 The three tiny kittens began their lives like many in Los Angeles do: hidden away by their mother beneath a building. But when the mama cat left one day and didn’t come back, the kittens would only survive a few days (if that) without help.

They got that help and are now happily living in a foster home with a Best Friends volunteer. Their story is a glimpse at the reality facing thousands of other kittens just like them each year who end up in city shelters before they’re old enough to be adopted, and a look at how we’re working with our partners to save them.

Without the programs now in place in Los Angeles, most of the very young kittens born each year who enter Los Angeles city shelters would be at risk of being killed. But because of the No-Kill Los Angeles (NKLA) initiative, that reality is changing, one kitten at a time.

Read more about the NKLA initiative

Concerned neighbors contacted Los Angeles Animal Services (LAAS) for help after hearing the kittens’ cries coming from under a building. Soon, the shelter’s Specialized Mobile Animal Rescue Team (SMART) was there to rescue the kittens from the safe hiding spot where the mama cat had last left them days earlier.

The shelter’s medical team determined that the kittens were hungry and dehydrated, but otherwise OK. The only trouble was that it would be several weeks before they’d be big enough to be spayed or neutered and adopted into homes. As one of the largest and busiest shelters in the country, LAAS doesn’t have the luxury of keeping and caring for a litter of orphaned kittens for several weeks ― especially not when dozens more kittens arrive at the six city shelters every single day.

That’s where the No-Kill Los Angeles (NKLA) Coalition comes in. Not only does Best Friends provide funding for several coalition groups to take kittens into their nurseries, but it also operates a busy kitten nursery at the Best Friends Pet Adoption and Spay/Neuter Center.

The Best Friends kitten nursery was the next stop for the three tiny kittens (dubbed Vince, Vanessa and Velma), who were getting exactly the help they needed at every turn. 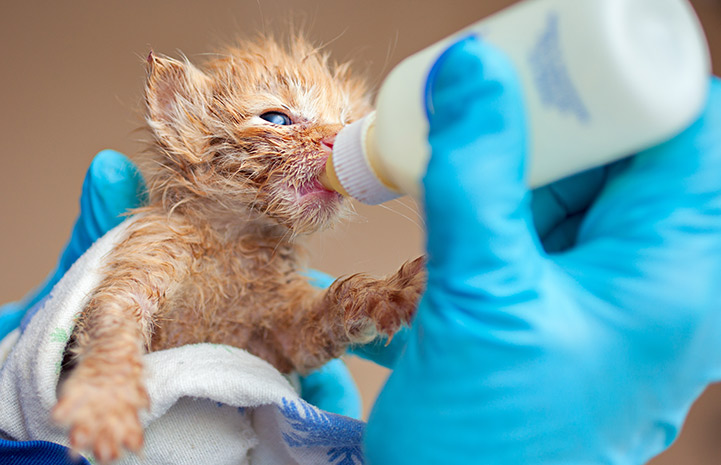 Kitten nursery: A vital component to reaching no-kill in L.A.

At the Best Friends kitten nursery in Los Angeles, lifesaving isn’t a nine to five operation. Very young kittens need to be bottle fed every few hours, so the nursery is open 24 hours. In fact, “feed, medicate, clean, repeat” has become the mantra there, because that’s what the kittens need to keep them healthy and growing until they’re ready to be spayed or neutered and placed in homes.

Kittens began arriving in shelters in March, and since then, the nursery has taken in hundreds of orphaned kittens, as well as those surrendered with their mothers. The nursery has grown in capacity each year, and this is the most important year of all, because the goal of NKLA is to make the city of Los Angeles no-kill, which means saving at least 90 percent of pets entering shelters by the end of 2017.

Janette Nevils, cat care manager for Best Friends in Los Angeles, estimates that the nursery cares for about 150 kittens at a time through each spring and summer. Since it opened in 2013, the nursery has cared for more than 9,000 newborn kittens and nursing mothers.

“About 70 percent of the kittens who come to the nursery are unable to eat on their own,” explains Janette. It takes a fantastic amount of work to feed and care for so many kittens, and that’s why they are at risk when they enter busy shelters. 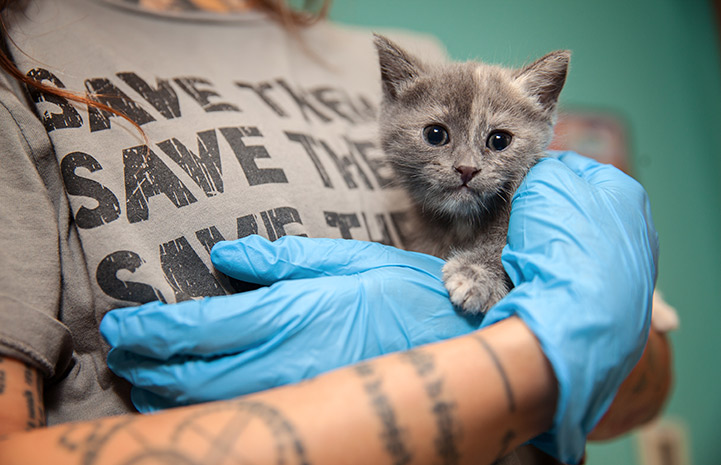 “Our L.A. nursery addresses the critical need to save underage kittens from being killed,” says Marc Peralta, executive director of Best Friends in Los Angeles. “This a vital component to helping Los Angeles reach its goal of becoming a no-kill city by the end of the year.”

“Looking at the numbers over the years, it is easy to see that the largest number impacting L.A. City Animal Services' live save rate is the underage neonatal kittens who come in,” says Brenda Barnette, general manager of LAAS. However, since nonprofit organizations are starting up kitten nurseries, including the Best Friends nursery, the save rate at LAAS rose significantly. Brenda says, “Now we are able to serve – and save – our most vulnerable population, which is key to achieving no-kill by the end of 2017.” 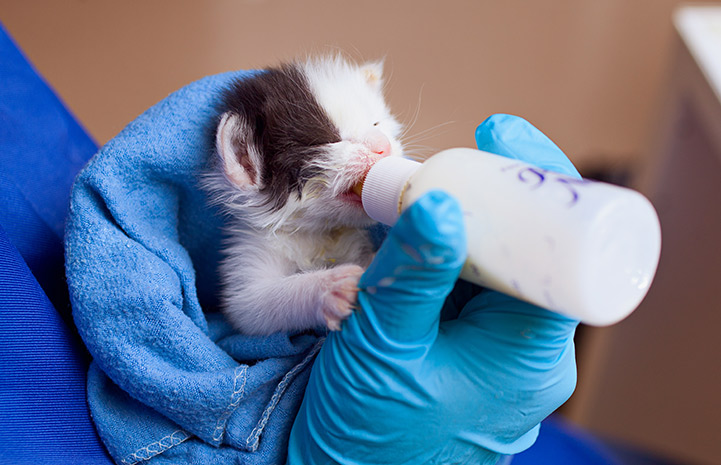 Even a nursery that will take in several thousand kittens this year isn’t enough. That’s why a robust foster program is just as important as the round-the-clock staff and volunteers who keep the nursery running.

“Fostering plays a huge role in the lives of these young kittens,” says Janette. “In homes, kittens get even more attention and care, and they develop socialization skills that will help them get adopted.”

In fact, on the same day Velma, Vanessa and Vince arrived at the nursery, Best Friends was able to place them in a foster home. Today, the kittens are eating on their own and slowly coming to love people. “They know how to position themselves in our arms to be scratched just so,” says Emily, their foster mom, who says they’re getting more confident and playful every day.

Soon they’ll be big enough to be spayed and neutered, and will be adopted by new families to love them. And that will be a very good thing, because each time a kitten goes home, more space is available in a foster home or the nursery for another kitten to receive the same love, care and a second chance at life.

Though saving one kitten (or three) at a time may not seem to make a big impact, it absolutely does. It matters not only to the little ones who now have happy lives to look forward to, but the structure is in place to make No-Kill Los Angeles a reality, when every kitten entering the shelter (like Vanessa, Vince and Velma did) is saved. 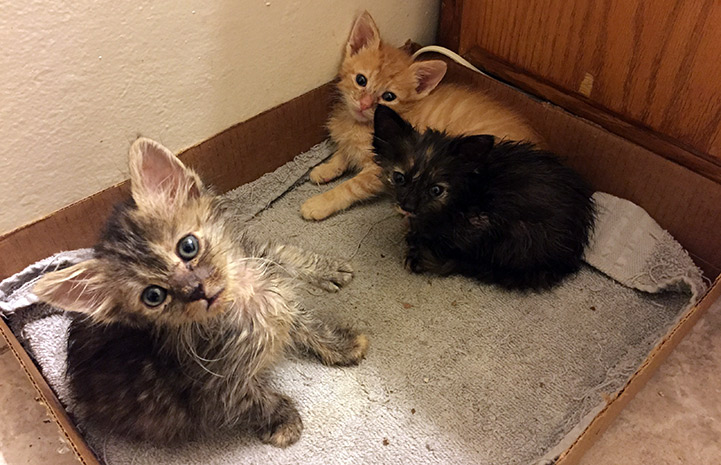 Photos by Lori Fusaro and courtesy of the foster family