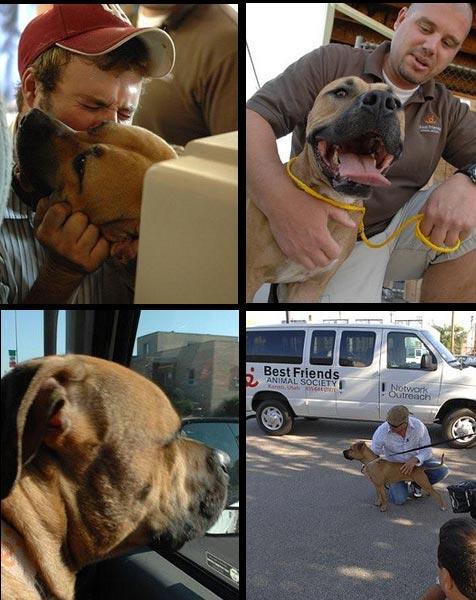 Saving dog from death due to Denver pit bull ban

Even though Forrest the pit bull did no harm and posed no threat to anyone, even though he's as sweet and affectionate as any dog could be, Denver’s animal control had no choice. They condemned Forrest for being what he is — a pit bull, a breed banned in Colorado’s capital city.

Protesting the killing of one pit bull in Denver, Colorado

Adhering to the policy it had regarding pit bulls caught twice wandering the streets, Denver Animal Care and Control at first intended to euthanize Forrest. But local pit bull advocates who oppose the ban caught wind of the story: Forrest, a dog so gentle he plays with chickens, escaped his yard and found his way inside the city limits, where animal control picked him up for a second time. The advocates rallied, and a worldwide protest ensued in support of Forrest and against Denver’s ban on pit bulls.

As this protest raged, Anna Gonce, Best Friends’ associate director of Community Programs and Services, and Russ Mead, Best Friends general counsel, negotiated with Doug Kelley, director of the Denver Municipal Animal Shelter, to come up with a lifesaving solution for Forrest.

And for the first time since Denver imposed its pit bull ban in 1989, the city granted clemency to a pit bull picked up on his second offense of running loose. The agreement came on the heels of a new city policy that gives the owners of nonviolent pit bulls the option of taking their dogs out of the city rather than having them euthanized.

In exchange for this clemency, Forrest’s person, Chris McGahey, signed an agreement whereby he surrendered ownership of the dog to the city. In return for McGahey’s guarantee that neither he nor his family members would ever re-adopt Forrest, the city agreed to turn Forrest over to Stray Rescue, a no-kill animal rescue in St. Louis, Missouri. Best Friends had previously worked with Stray Rescue in providing sanctuary to eight pit bulls saved from a dog-fighting ring in Washington state.

Per the agreement Best Friends struck with Kelley, Best Friends sent its animal care operations manager, Jeff Popowich, to Denver to transport Forrest to Stray Rescue. The departure proved to be an emotional one, with McGahey tearfully saying goodbye to Forrest and vowing, "If it’s the last thing I do, I will get that ban dropped."

"It was heartbreaking seeing what a good dog Forrest is," Popowich says. He found Forrest to be the perfect "spokes-dog" for pit bulls. "He’s great with kids, with other dogs, even with chickens."

Forrest’s new foster family was waiting to take him home the moment Popowich arrived at Stray Rescue. Forrest is currently living with Phil Adams, a volunteer for Stray Rescue, and he has already taken to sleeping on the couch with two of Adams' other dogs.

Stray Rescue’s founder Randy Grim says that he will have little trouble finding a permanent home for Forrest. "He’s more adoptable than the 290 dogs we currently have up for adoption," Grim says. "He’s a perfect gentleman."

Grim says that whomever Stray Rescue finds to adopt Forrest, he will make sure that McGahey has the right to visit and spend time with Forrest.

Though Forrest was saved, his previous euthanasia sentence and his subsequent banishment from Denver underscores the unjustness, and the absurdity, of a law that stereotypes and targets one breed as innately dangerous, even if individuals of that breed are likely to be as innocent and well-behaved as Forrest is.

"Of course, we’re delighted to help Forrest," says Paul Berry, chief executive officer of Best Friends, "but we remain perplexed at Denver’s persistence to keep this ban in place. City after city has defeated or repealed such bans in favor of more thoughtful legislation that punishes bad owners instead of good dogs. We remain eager and hopeful to work with Denver’s city council to help them find a more civil and humane solution to their concerns."

"We don’t think the ban works" Mead says. "It does nothing to make a city safer."

Instead of a breed-specific ban, Best Friends advocates a multi-pronged approach to dealing with dangerous dogs, one that does not target any breeds, but rather targets the negligent owners who intentionally or unintentionally teach dogs dangerous behaviors.

Best Friends believes that communities can more effectively reduce the number of dog attacks by: