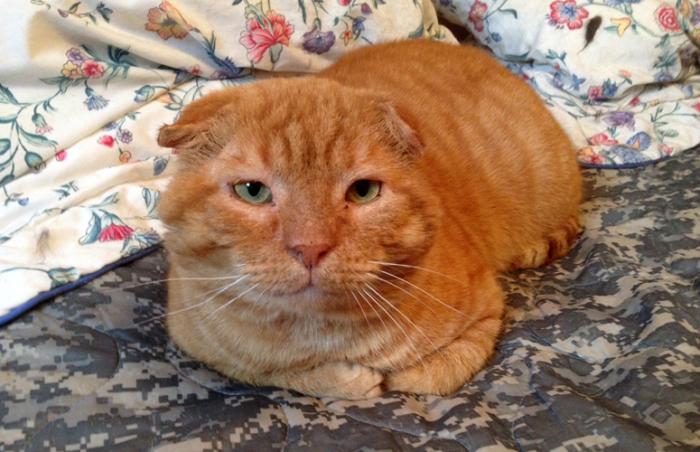 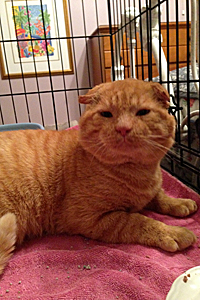 Gepetto, a large tabby cat with swirls across his coat, like orange marmalade, is as sweet as his coloring suggests. And his emerald eyes twinkle below his uniquely folded ears, making him truly one of a kind. He looks like a Scottish fold cat, but is not. The stray community cat had most likely lived his entire life out on the streets in Baltimore, Maryland. No one knows how he got there, but people in the neighborhood began to notice when the big orange cat started scratching his ears raw. That set in motion a network of caring folks who would go the distance to help save the friendly tomcat from an unknown fate.

Baltimore is a haven for cats, in part because of the Community Cats Project, a partnership of Best Friends Animal Society and PetSmart Charities®. The project partners also include Baltimore’s municipal shelter, Baltimore Animal Rescue and Care Shelter (BARCS), and other organizations dedicated to trap/neuter/return (TNR).

Gepetto’s medical issues were quickly assessed and addressed: He had an upper respiratory infection and needed some teeth extracted, and he had ear mites. The mites were also responsible for his distinctive look; with his stubby ears, damaged from so much scratching, Gepetto looked like a Scottish fold, a breed of cat with folded-over ears. He was affectionately dubbed a “Baltimore fold” by the caregivers who had gotten to know him. He was an immediate favorite, but he still needed a place to go.

The word went out to find this special cat a foster home. The Feline Rescue Association reached out to their supporters and within a week Gepetto was settling into his new favorite spot, the queen-sized bed in Trish Tilson’s guest room. “When I saw his photos, I immediately fell in love with him,” says Trish. She specializes in fostering cats with FIV. “I have had two FIV-positive cats and two non-FIV cats living comfortably, happily and healthily together for years.” 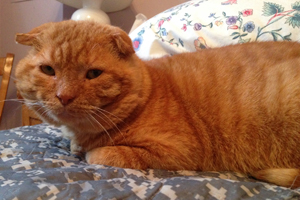 Trish marvels at how fast Gepetto accepted being a pampered house cat. He’s relishing the finer things in life: a warm bed, food, love and head scratches. In fact, it’s like he’s lived indoors his whole life. “I truly believe some of these cats, especially the older ones, know they have hit the jackpot,” says Trish.

As his personality continues to unfold, Trish finds Gepetto irresistible. “He’s just a big lug,” she says. “He’s very laid-back and has a permanent smile on his cute little face.”

Gepetto is also quite the talker and an affection hound. When he’s not keeping a watchful eye on the neighborhood from the windowsill, he’s actively seeking someone to love on him. He also gets along very well with other cats, and hasn’t met a meal he didn’t find delicious. “When I walk into the room, he’ll look up at me as if to say, ‘Is it dinner time yet?’” says Trish. When she’s putting out the food bowls, he’s the first one to start chowing down.

The Community Cats Project’s primary focus is TNR, but everyone involved is striving toward the same goal: to save as many cats as possible. Rebecca says, “We are grateful to have a network of caring folks willing to help our community’s most at-risk felines, and we’re grateful to see the cats who can’t go back to their neighborhoods living as cherished family members.”

Thanks to like-minded organizations working together, and caring individuals stepping up, Gepetto’s future is as bright as his orange coat.

To bring hope and healing to more animals like Gepetto, become a Best Friends member.