Home  /  Stories  /  Latest News  /  Arthritic, senior pit bull finally goes home — to someone who thought she'd rather have a puppy
Most read news

Arthritic, senior pit bull finally goes home — to someone who thought she'd rather have a puppy

Liv Sigel came to the NKLA Adoption Center with a very clear idea of the kind of dog she wanted to adopt. First of all, the dog would be small — and young, too. But then, as she walked through one of the dog rooms at the NKLA center, she saw a dog with such a kind, sweet face that she had to stop and meet him. His name was Gunner, and he was the exact opposite of the dog she thought she wanted.

First off, Gunner is a pit bull mix and much larger than Liv had in mind. He’s also a senior who’s lived long enough to have earned his achy, arthritic joints. Still pretty sure that she’d be adopting a small, young dog, Liv decided to spend some time with him that day. And her plans went wonderfully wrong the moment Gunner gently laid his head on her lap in the meet-and-greet room. That day, she adopted her first dog — a gentle senior named Gunner. 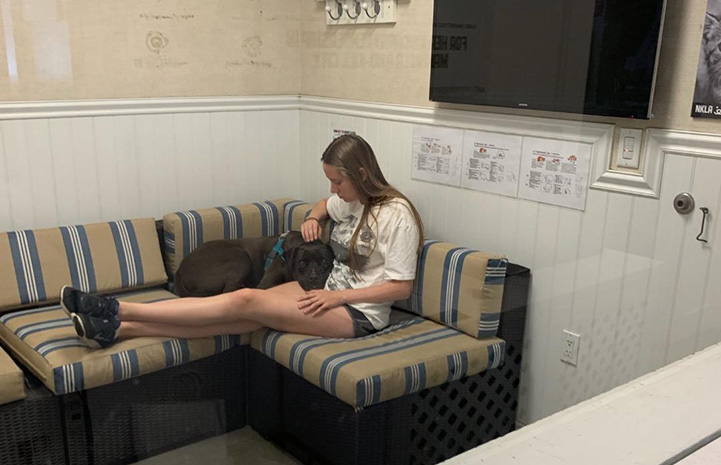 Gunner waited longer than most dogs at Best Friends in Los Angeles to find his match. With his lanky build, advanced age and black color (not to mention his limited mobility and the fact that he does best in a home without other dogs), Gunner wasn’t the first choice of most people. But the longer he stayed at the center, the more volunteers and staff, including Michelle Sathe, public relations manager for Best Friends in Los Angeles, fell in love with him.

“Gunner stole my heart early on,” says Michelle (AKA Gunner’s aunt), who first got to know Gunner when he was at the Best Friends Lifesaving Center in Los Angeles. Michelle had been looking for an adoptable dog to bring on TV, and when she walked into Gunner’s room for the first time, he was excited but polite and sat patiently while she put his harness on.

“I felt so comfortable with Gunner's people skills,” says Michelle. “This made him an ideal TV dog and I took him to every station that would have us on, trying to find him a home.”

Whenever Michelle had some free time, she’d pop over to see Gunner and take him out for a car ride (his favorite thing besides people), to the park or to Starbucks for a “puppuccino” like the cool aunt she is. If time was short, they’d play in the yard together.

“Once Gunner got his fill of love and snuggles, which took a while, he would stretch himself in a sunny spot and nap. He was so happy in those moments, it was hard to put him back,” says Michelle. 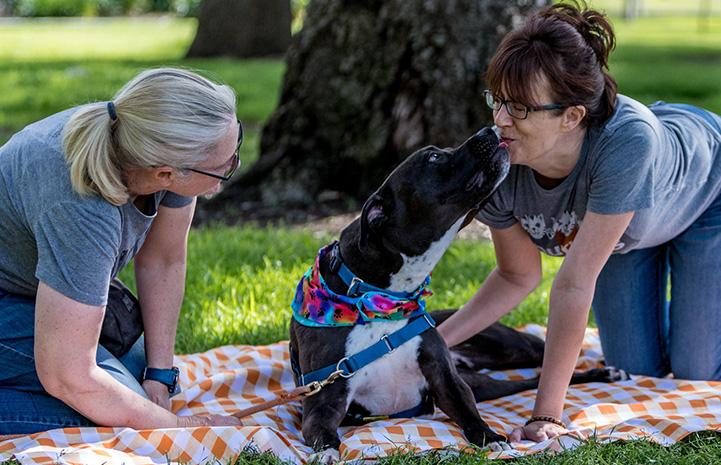 Gunner also had a special place in the heart of volunteer Kim Kurland. “We all knew how sweet Gunner is,” says Kim, a dog trainer at the center. “We just hoped somebody would come in and see how sweet he is, too.”

Kim spent a good deal of time with Gunner to help him hone his leash skills and learn how to remain calm around other dogs, something Gunner can find challenging. She says the key to walking dogs with arthritis is to let them go at their own pace, which is often pretty slow. “I just wanted to give him as much attention as I could,” says Kim, who recently posed with Gunner for a photo shoot to celebrate her 1,000-hour volunteer milestone. 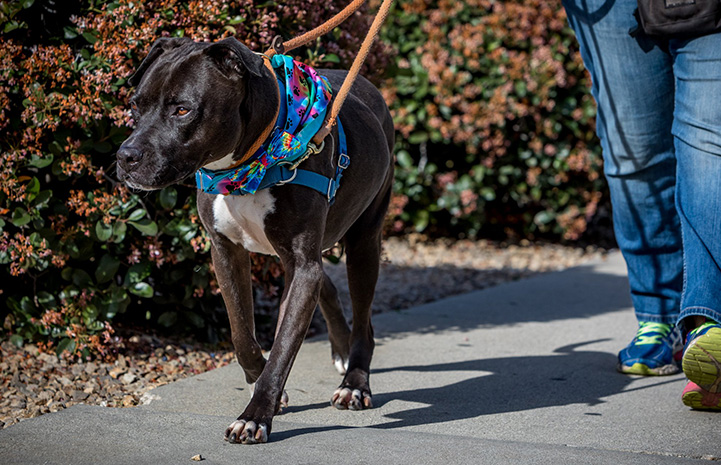 Eventually Gunner was transferred across town to the NKLA Pet Adoption Center. That’s where he meet volunteer Michelle Pratt, who after having her heart stolen as well, became Gunner’s second Aunt Michelle. She regularly took him home for nightly sleepovers, where he wasted no time claiming the entire bed — that is, after he understood he was welcome.

On his first night at Michelle’s place, he sat patiently beside the bed until she motioned for him to join her. “He was waiting for an invitation,” says Michelle, who also learned that Gunner was perfectly housetrained. At dinnertime, he never tried to snag anyone’s food, and he stayed calm even when he sensed that just beyond the closed door were two cats who wanted desperately to meet him.

Michelle documented those sleepovers on Facebook by posting the cutest photos of Gunner being tucked into bed and sleeping on her lap. She also shared detailed notes with the center about how well Gunner did during sleepovers. The hope was that the posts, photos and notes would help him find a home. (Spoiler alert: They did.)

Program lets dogs on the trail — or a couch

Michelle Pratt was considering fostering Gunner for a longer period of time when she got the great news: A young college student named Liv, who visited the center looking for a small dog, met Gunner and adopted him after the team shared details from Michelle’s notes.

Liv signed the adoption papers for a seven-day trial with Gunner, but even before she was finished writing her name, she knew she wouldn’t be bringing him back. 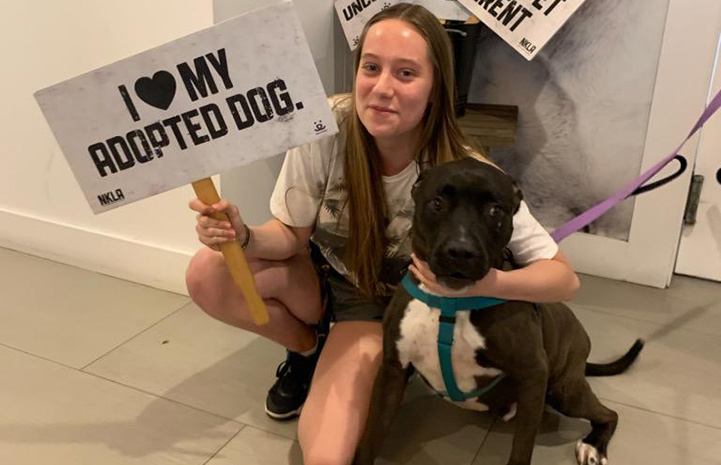 When she left with Gunner, she was worried he would be too big for her car, but he fit right in. Says Liv: “He’s a big boy — just 90 pounds of pure love.”

In fact, Gunner (now named Vance) fits into Liv’s life like he was meant to be a part of it all along. “We both have the same struggles with arthritis,” says Liv, who sympathizes with Gunner every time she gives him medication to relieve his pain (because she takes medication to manage her arthritis, too). “He can’t do any strenuous activity like take long hikes,” she says. “But that’s OK, because I can’t either.”

Liv lives with two roommates, which suits Gunner just fine because he loves people. The feeling around the apartment is definitely mutual, because they coordinate schedules so they can take turns spending time with Gunner. And whenever Liv gets invited to a party, she’s often asked to bring Gunner, too.

Currently, Gunner is brushing up on his fetch skills during regular outings to the beach, which he balances with a fair amount of downtime. “We get exercise, but we also like to lay on the couch and watch Netflix,” says Liv. 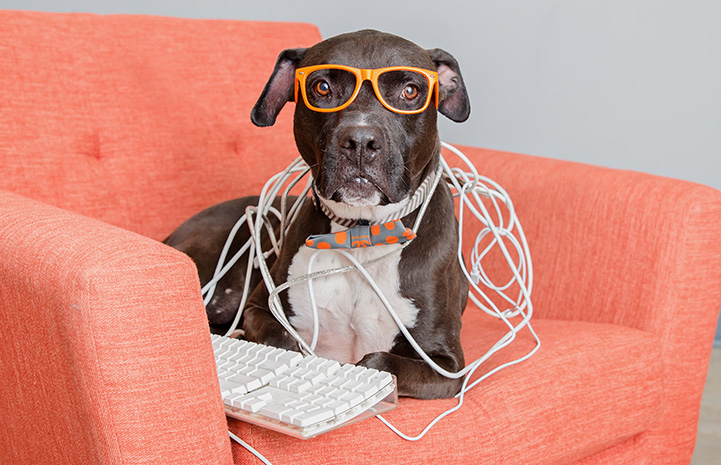 People often ask Liv why she didn’t stick with her original plan to adopt a younger dog. When they do, Liv reminds them that puppies tend to find homes quicker than senior dogs. “Gunner hasn’t had it easy at all,” says Liv. “He more than deserved a happy home, and now I prefer senior dogs. I’m sticking to adopting older dogs from now on.”

Back at Best Friends, news of Gunner’s adoption made Michelle Sathe tear up, and the  floodgates opened again when she saw photos of Gunner with his new mom hanging out at the beach. “I cried some more,” she says, “but they were the happiest tears because Gunner was finally home.” 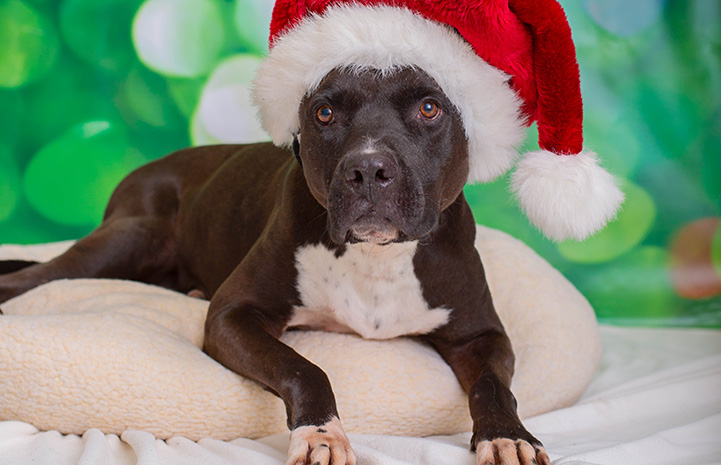