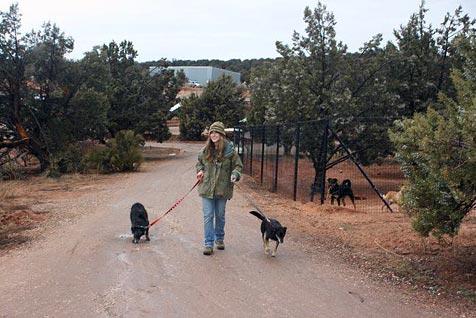 From a dog’s point of view, it’d be hard to imagine a better way to pass the time than having somebody feed you a meatball at the end of a silver spoon. High and mighty privileges indeed: A far better form of pampering than sleeping on a silk pillow.

Slipping dog meds in a treat

Many dogs at Best Friends receive a meatball on a spoon every morning, rain or shine. (OK, no, the spoon isn’t silver. …) As far as the dogs are concerned, they can’t imagine a better way to start the day. One strategy behind this ritual is purely practical. Dogs are crazy for these treats, and never notice any medicines stashed inside. Not all the dogs need meds, however. For those who don’t need them, they still receive equal treatment. No fair making anybody jealous. Plus, it’s a great socialization technique.

For shy dogs, taking treats straight from a human hand can be intimidating. The spoon helps them feel more confident about the process. It adds a little distance. Even getting to this level, however, can sometimes be a real challenge. For Specks the dog it was ten years in the making. Once he finally took the plunge, his life changed forever.

Specks came to Best Friends ten years ago as a six-month-old puppy from a hoarding situation. He was terrified of people. He used to sprint laps around the yard any time a person approached. When it came time for a trip to the clinic, it took several people to catch him and coerce him into a carrier. One way or another, Specks was not giving people an inch. He didn’t trust them, and didn’t see a reason to. "He was so fearful," explains caregiver Jen Doolittle.

Still, that never has stopped caregivers from trying. They kept offering him treats, toys, or other rewards in hopes that he’d respond favorably. Anything to help him connect people with something positive, anything to flip that switch in his mind. Then one day about a year ago, Specks finally decided to take a chance.

Whether the planets were aligned that day or his stomach finally got the better of him, he just couldn’t ignore that meatball on a spoon any longer! Specks made a grab for the meatball and was so anxious to get the process over and done with that he ended up nabbing the spoon as well. The caregivers watched the spoon wander off with a smile. They knew it was only a matter of time at that point.

Sure enough, Specks wanted to keep going. After he grew comfortable with the spoon treat method, caregivers progressed to the next step. They began hand-feeding long strips of beef jerky. Long strips were important because he was still prone to using the grab and run method. He stayed so keyed up that he couldn’t take treats gently. Better to use long strips that are far from the fingers.

In time, he relaxed about the process. He started taking treats gently. Caregivers could switch from long treats to short ones, then finally to hand-feeding his meals. Hand-feeding meals to a shy dog can go a long way in teaching trust.

One particular step, however, Specks had a difficult time making: he believed walks were a bunch of nonsense. True, he had learned to accept that people can be trusted to provide a tasty snack. Beyond that, he couldn’t understand why any dog would want to go strolling around with a human, especially with a leash involved. That all started to change when a roommate shuffle landed him in another play area.

In Specks’ new digs, he happened to share a fence line along a popular walking route. Here, he got a firsthand view of many different dogs going for walks. Much to his surprise, these dogs didn’t seem frustrated or scared. They were happy! Even his roommates and buddies strolled past without a care in the world. "Wait, you too?! What’s going on here!"

Specks started following along the fence line when his dog friends would walk past. It’s like he had to see the process up close to grasp the concept. Why were his friends having such a good time? Didn’t they know they were wearing a leash?

Jen Doolittle decided one day a few months back that she’d give things another try. She had to enter Specks’ play area to bring Snyder, one of his friends, to shy dog class. Jen had a slip lead with her and approached Specks.

By now, Specks was much more comfortable around people. He didn’t high-tail it to the back of the play area like he had before. She got close enough, pulled out the slip lead, and tada! All of a sudden, Specks was wearing a leash.

He had worn a leash before, long ago. Back then, he had been so afraid that he went straight into an alligator roll and didn’t stop until they unhooked him. This time, while he was admittedly a bit apprehensive, he took courage from his buddy Snyder and from all the positive reinforcement he’d experienced lately with people. Jen walked Snyder and Specks across the play area and out the front door. And with that, his whole world opened up.

Specks was going for his first walk.

If the biggest movie star imaginable had been touring Dogtown that day, he or she would have taken second seat to what happened next. Word got out on the radio that Specks was on a walk and heading over to shy dog class. The news spread in seconds. Caregivers, trainers, anybody who had ever known Specks came rushing over to stand witness as he strolled down the trail. They knew he would walk past Dogtown headquarters, which is where they all gathered to cheer him on silently.

If everybody hadn’t been worried about startling him, he’d have had thunderous applause, endless cheering and possibly a marching band for good measure. They wanted the experience to remain positive, however, so everybody stood as quietly as possible, grinning ear to ear. Specks strolled right on by. He did great. (The cheering and high fives came later!)

That first walk happened several months ago. Since then, Specks has become so excited about walks — yes, he finally gets the concept — that he runs inside when caregivers approach. They can now leash him right up. He also has discovered car rides.

Then, just the other day, he went one step further. Specks had his first successful sleepover. He went with Jen Doolittle.

The time lapse between taking that first meatball from a spoon to trusting people enough to where he could go on a sleepover was about one year. A long wait, but oh so worth the reward.

"He was like a regular dog," Jen said about the sleepover. He did fine with her dogs and cats, he had no bathroom accidents inside, he ate in the kitchen with the rest of the dogs, and he even joined in at barking hello to the neighbor dogs. Specks has discovered a new way of living and has embraced it fully.

"I get chills just thinking about it," Jen says. "This dog could go home."

Best Friends has the best, well-trained and -cared for animals! Take a look and adopt today!