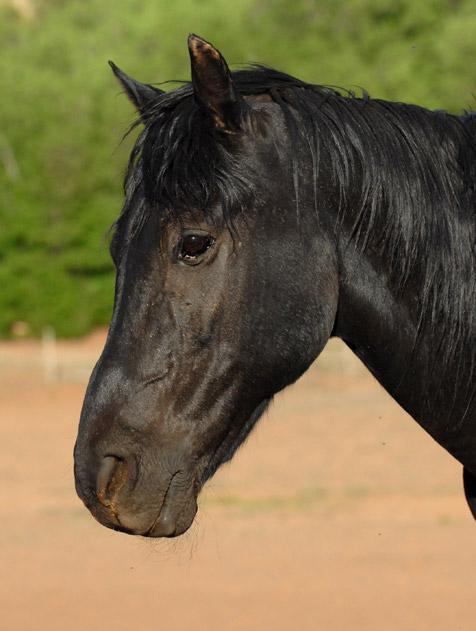 Unless you’re a kid and happen to have a very healthy (and easygoing) Great Dane at home, chances are you won’t be able to ride your pet dog around the yard. Funny thing, though, that never seems to stop people from wanting dogs as pets. A silly example, perhaps, but horses get passed over frequently for that very reason. If they can’t be ridden, sometimes that fact alone is a deal breaker in potential adoptions. Too bad! Pasture pal–type horses have a lot of love to give, and they can offer as much companionship as a ridable horse.

On the other hand, Phantom the horse found a family who knew how to look beyond that particular detail. They didn’t mind one bit that he’s a little older and not in the riding game anymore. As it turns out, they were actually looking for an older horse.

Kristin and Chris Hagge of Argyle, Texas, had a horse named Goodnight, whom they adopted from a nearby rescue. Goodnight was happy at their home — indeed, with a loving family who pampers and plays with him, 10 acres of lush grass and ample shade trees at his disposal, he doesn’t have much to complain about! — but he was also a tad lonely on occasion. They wanted to find him a friend.

Finding another senior horse to adopt

They decided to search for adoptable senior horses. "I’ve always liked the idea of getting an older horse," says Kristin. That’s when they came across 29-year-old Phantom on the Best Friends website. They had known about Best Friends for years, and felt confident that the adoption folks at the Sanctuary would know the animals well enough to make a perfect suggestion for their horse. A solid game plan, by the way. The adoption coordinators at Best Friends are excellent matchmakers!

As they discussed Phantom with Best Friends horse adoption staffer Margaret Schreiber, they knew he was the horse for them and decided to adopt. As an aside, it didn’t hurt one bit that Phantom is such a handsome fellow. "I’ve always thought black horses were beautiful," points out Kristin.

By way of background, before Phantom came to the Sanctuary he’d lived in quite a few homes. He was more than ready for a forever home where he could stay put. Well, he’s hit the jackpot! Phantom fits right in with Goodnight and the rest of the family. He probably asks people to pinch him on occasion just to make sure he’s not dreaming.

"I’m so thrilled," says Kristin. "He’s exactly what we wanted. He’s just sweet, sweet, sweet!" And as for Goodnight, the two are practically inseparable. "They’re getting along great," explains Kristin. Goodnight’s ears perked up the moment Phantom set foot on the property. He was entirely fixated on the newcomer. They became fast friends in no time, and now follow each other everywhere.

As one small example, Kristin once had to take Goodnight to a separate area for a short while to give him medicine. Phantom was so put out that he kept pacing until Goodnight returned. He was looking for his buddy!

One more detail as to why Phantom is such a great fit: Chris and Kristin have three children, and Goodnight is a little tall for them to groom. Phantom, however, is shorter, and stands the perfect height for the whole family to brush and pet. He’s one lucky fellow, and his new family feels the same way. A well-deserved happy ending, and cause for celebration for pasture pals everywhere.