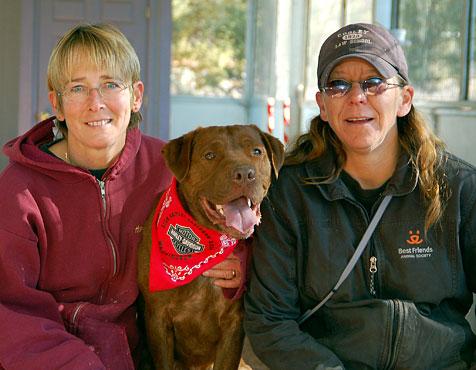 Dobie, a chocolate Lab and pit bull mix who’s lived at Best Friends for two and a half years, has left the sanctuary for a promising career in law enforcement as a drug-sniffing police dog.

Dog with athletic ability and intelligence

His new trainers, Misty Maldonado and Sharitta Odom from Lomita, Texas, recognized Dobie’s intelligence along with his athletic ability when they first met him. But when they discovered Dobie loved fetching tennis balls, that’s when they knew he could be a narcotics dog.

Four-year-old Dobie is a pro on an agility course. And he knows all commands, including shaking hands on cue with both paws as well as responding to agility signals, thanks to his Best Friends caregivers, Heidi Zogg and Kersten Muthreich. And he'll also roll over for belly rubs on command.

Dobie began life as a puppy chained in a wrecking yard. But he failed miserably as a junkyard dog because he was just too friendly. A group in Park City, Utah, rescued him. When they took him in, he’d been abused and starved. Because Dobie lived alone in the junkyard, he was in the habit of pacing along the fence line as far as his chain would take him. Once he went to the rescue group, he ran himself and his paws ragged. They couldn’t keep weight on him. A few months later, in November 2003, they took Dobie to Best Friends.

When he arrived at Best Friends, "he was uncontrollable, frantic," said one of his caregivers, Heidi Zogg. "He couldn’t go in and out of his run without trying to escape. He had no confidence and no ego."

Dog who is crazy for tennis balls and praise

While Dobie waited for that special home, Heidi and Kersten Muthreich, another caregiver, started working with him. Dobie made real headway when they realized that it was a tennis ball, not a treat, that motivated him.

"We didn’t know what he wanted at first," Heidi said. "When we stopped trying to train him, he started training us."

And that, Kersten said, is when Dobie began to excel: "He’ll do anything for a ball," Kersten said, "and, of course, for praise. He loves getting praise."

Dobie also loves the water. Heidi and Kersten started playing catch and keep-a-way with him, including at the sanctuary’s dog park and in a three-foot-deep pool, where Dobie continued to progress.

"Once a week for a good hour, we started taking him to the park and the pool," Kersten said. "We got really consistent with everything we did with him."

Heidi and Kersten also started teaching Dobie games like hide-and-seek, which is exactly what drug-sniffing dogs are taught. Without knowing it, Dobie’s caregivers were preparing him for his future work as a police dog.

"He’s a very special boy," Heidi said." I knew he was special when he first got here. I could see it in his eyes. He wanted to give us everything he had."

Kersten agreed. "He’s an amazing boy," she said as she and Heidi played ball with Dobie one last time the morning he left for Texas. "Today is his big day."

They were in the habit of taking Dobie several times a week through his exercises. They also spent time with him in a large fenced run. As a result, Dobie no longer has the desire to run fences.

And at Tara’s Run (a training building at the sanctuary with agility equipment), Dobie on his own started going through an agility tunnel and running across a platform.

So five months ago, more equipment was rounded up and they taught Dobie to go through a hoop and use jumps on an agility course. "We taught him step by step," Heidi said. "First he learned to go over one jump, then two, then three."

Now Dobie is about to use the skills Heidi and Kersten taught him for his new role as a police dog. In Texas, his trainers Misty Maldonado and Sharitta Odom will be teaching him even more.

Misty, a police officer, trains dogs with her friend, Sharitta, who has K-9 therapy dogs that she takes to schools and hospitals. Together, Misty and Sharitta have trained both drug-sniffing and search-and-rescue K-9s. About six of their rescued dogs are at work today at police and fire departments in their area.

Until Dobie finds a police partner, he’ll go to work with Misty, ride in her patrol car, and make stops at both the town’s shopping mall and at a school, where Misty checks in each morning as the area’s truancy officer.

And they’ve already started teaching Dobie to sniff out and find narcotics. "We have an agility course and a large barn that we take the dogs to, similar to the interior of a house, where they learn to detect narcotics," she said. "We place drugs there so the dogs can find them."

Ahead of the game

When Misty and Sharitta traveled to Best Friends recently to look for a K-9 candidate, they were confident that Dobie would fit the bill.

"The ball drive is how we train our dogs," Misty said. "They work for the ball. Everything in narcotics sniffing is a game. Dobie already finds the ball. Then we start hiding the narcotics with the ball. The tennis ball is the reward. If the dogs find the narcotics, they get the ball."

That puts Dobie ahead of the game, due in large part to the hard work of Heidi and Kersten. It shouldn’t be long, Misty said, before a Texas law enforcement agency is in need of a drug-sniffing K-9 like Dobie.

After his training is complete and he’s placed with a police department or a federal agency, Dobie will become an officer’s partner. He’ll be deputized and given a law enforcement badge, and he’ll officially be renamed "K-9 Dobie."

And Dobie will be treated with the same respect a human partner receives.

"Police dogs are spoiled rotten," Misty said. "The dogs are with their cops 24 hours a day. They work with them and they go home with them."

But Misty and Sharitta won’t let just anyone take one of their trained dogs. Misty said, "We’ll have somebody come out, spend a week with us, bond with a dog, and see if the two are compatible. We don’t want them to go with an officer they don’t connect with. We’re pretty picky about that."

And that’s just fine with Heidi and Kersten. They know Dobie will have a full, productive life with a partner who loves him. But knowing that didn’t stop their tears as they watched the van drive away, taking Dobie to the airport and his new home.

"He’s been a big part of our lives," Kersten said. "We’re going to miss him."