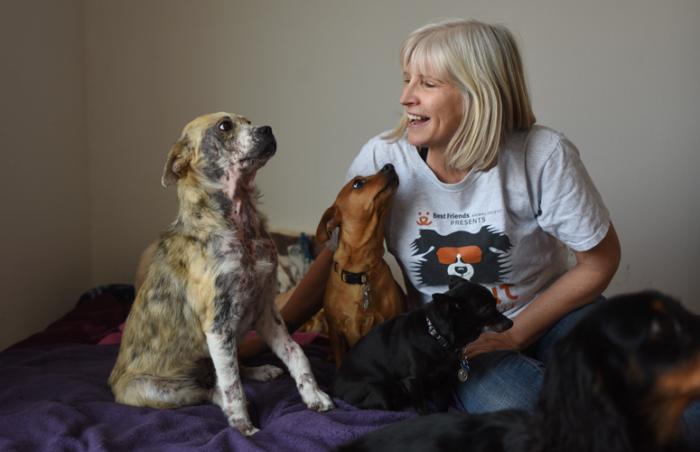 Puppy rescued from a ditch behind a gas station 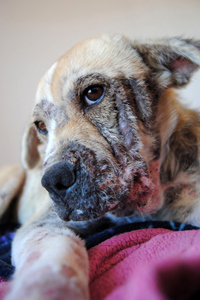 For such a young dog, Shubee has sure seen a lot. You can see it in her big, soulful eyes whenever she looks up at you. It takes her a minute or two to figure out if she can trust new people. But soon, her big Yoda-like ears perk up, and she flashes her adorable, snaggletoothed grin. Then all you have to do is offer her a treat or talk encouragingly to her, and her whole body starts to wag as she leaps or crawls playfully forward to meet you.

"She's such a puppy," says Kim White, Best Friends’ clinic receptionist and Shubee’s foster mom. It’s true that Shubee is young — probably less than a year old — but she’s never had a chance to be a puppy until now. After all she’s been through, it’s amazing she even survived the first few months of her life.

Puppy rescued from a ditch

The little dog was barely surviving, living in a ditch behind a gas station in a rural area. She ate whatever she could find in the trash, including food wrappers, as well as scraps that people occasionally tossed her. And time was running out. Shubee would never have survived the winter alone in that ditch. She was starving, most of her fur was gone because of severe mange, and her skin was painfully inflamed and exposed.

A local rescue organization called Soul Dog Rescue found out about the little tan-and-white dog and was trying to rescue her, but she was far too scared to let anyone near her. However, after months of diligent effort, group volunteers finally managed to catch the frightened but desperate dog. As a small rescue group with limited resources, though, they knew that her physical condition required more help than they could give her. So Soul Dog Rescue reached out to Best Friends, and Shubee was soon on her way to the Sanctuary to get the critical veterinary care she needed.

Food, warmth, love and friends for puppy in need

With food, love and a warm, safe place to sleep (along with medication, special baths and grooming to soothe her mange-ravaged skin), Shubee made a complete turnaround in only a few weeks. At first, she would freeze and cower whenever anyone approached her, but she quickly realized that everyone she met was nice and only wanted to help her. And her treatment was making her feel so much better that her sweet nature soon came out. She began wagging her tail and showing everyone her silly grin.

While she’s still recovering from her ordeal, Shubee spends her days in the Best Friends Animal Clinic, where she keeps Kim company behind the reception desk, and helps her greet visitors and patients. At night, she goes home with Kim, where she has her very own room, a full-sized bed on the floor, and several other rescued dog pals to play with. 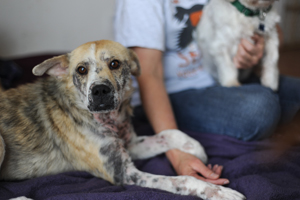 In a matter of weeks, Shubee got her second chance and watched her entire world turn around. It’s been an amazing transformation, but the best is yet to come. As soon as she has clearance from the Best Friends veterinary staff, Shubee will be going home with her new forever person.

Barbara Dott fell in love with Shubee the moment they met. “She was so engaging and brave after all she's been through,” Barbara says. “You would think she’d be feral, but she reaches out for love.” It’s true. The little dog who once cowered in a ditch now asks for love. And she’s getting more than she ever thought she could.

To bring hope and healing to more animals like Shubee, become a Best Friends member.