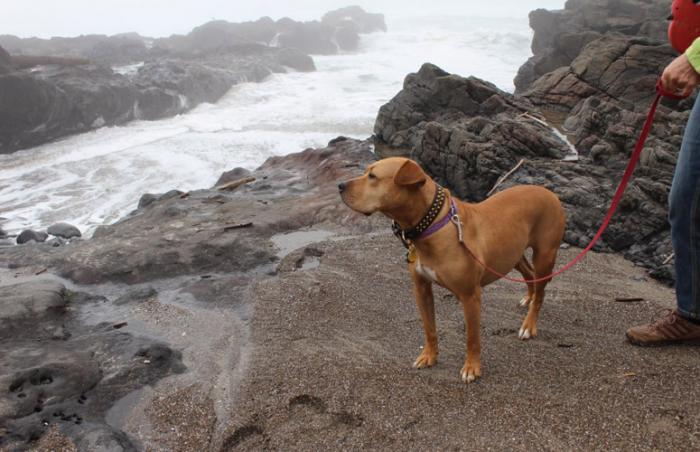 More about Squeaker from adopter Annick:

What has surprised you most about Squeaker? 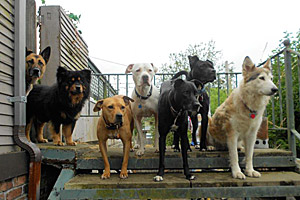 How she can live peacefully with a large pack of dogs. I still find that impressive. Squeaker is clearly uncertain around new dogs and does not have a lot of dog skills. So her living with all those dogs is amazing. She shows me every day that anything is possible if only you put your mind to it.

Another thing that surprised me is that she makes little grunting noises when she is super happy and cuddling with us. I did not know that about her. It's the cutest thing ever! She loves nothing more than giving and receiving attention. She is definitely the most affectionate dog out of the pack. She also smiles all day, every day. Everybody who meets her falls in love with her.

My absolute favorite thing is Squeaker's affectionate nature. When we are on the sofa, she needs to be next to us/on top of us. This dog is a doll, and she looooves people! It's funny because when our family members met her, they often said, "Wow, I can't believe a former fighting dog is so sweet." Squeaker also stares at you like she is in love with you. Her eyes are filled with love and tell a story. I think that if she could speak human, she would have a lot to tell, more than an average dog.

Well, cuddling and giving kisses by far. She also likes to get up in the morning and roll in the grass and zoom around. She does this every single morning. She also loves toys and is crazy about all kinds of different food. We call her "piggy" sometimes. I think that Squeaker is going through her second puppyhood.

Adopting her meant the world to me. When she came home with us, I thought I was dreaming. Now she is part of a large family, goes on daily walks, sleeps in bed with us, has a very large property to call her own, and can discover the world. She even saw the ocean last year. That makes me happy! Every dog deserves this. 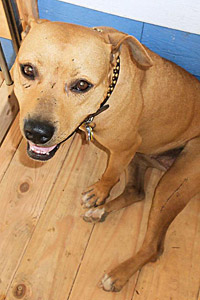 What do you think people can learn from Squeaker?

I think that people can learn a ton from Squeaker. First of all, Squeaker was not the easiest dog when it came to other dogs since she is scared and sometimes defensive, but if you don't know her, you would not think her reaction is based out of fear. I personally believe that most dogs who come from a fighting situation can live with other dogs. The true question is how much time and effort you put into rehabilitation.