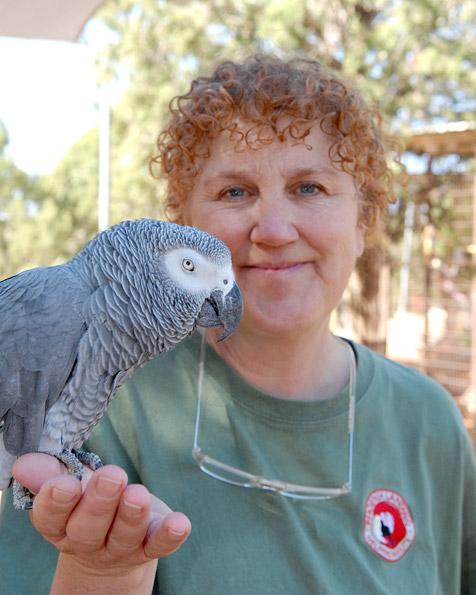 There’s something magical about seeing one of your kids grow up to do incredible things. Well, one of Best Friends’ own has done exactly that. Ten years ago, Ann Brooks of Asheville, North Carolina, attended the How to Start an Animal Sanctuary workshop at Best Friends. She had been thinking about starting a parrot sanctuary but didn’t know if she could pull it off. So she came to the workshop for some help.

How to Start an Animal Sanctuary workshop

The workshop ended up being exactly what she needed. "It kind of cinched my confidence to be able to move forward," she says. "It made everything manageable."
Starting a bird sanctuary

Before long, Ann was off to the races. She attended the workshop in October 1999 and filed papers to start her sanctuary on her birthday the following April. Phoenix Landing, named after her greenwing macaw, Phoenix, was born.

Ten years later, the all-volunteer organization is still going strong. Phoenix Landing volunteers spend a large portion of their time educating the public about parrots, but their biggest claim to fame is finding homes. To date, the organization has placed nearly 1,500 birds into homes. Like Best Friends, Phoenix Landing has a permanent relationship with any bird they take in. If a parrot loses his home for any reason, he still has a place with Phoenix Landing.

Recently, Ann returned to visit Best Friends for the first time since that workshop all those years ago. "Everything has changed!" she says. Indeed, the parrot part of the sanctuary back then was little more than a single building; it has since undergone multiple expansions. She was thrilled to meet with the staff, share her stories and plan future collaborations with Best Friends.

Phoenix Landing has hundreds of volunteers up and down the East Coast, but at times the work becomes daunting. When that happens, Ann says her macaw Phoenix gives her a look that says exactly what she needs to hear: "Don’t you give up. You keep moving." Ann intends to do just that.

Read about adopting a parrot.