Home  /  Stories  /  Latest News  /  Stories from the road: A dog and cat’s adventures
Most read news

Few things make Tina LaRocque happier than hopping in her vintage van and exploring the mountains just outside her Salt Lake City home — especially when her cat, Buddha, comes along as her copilot.

Tina loves car camping and outdoor activities like hiking and climbing, but after she adopted Buddha from the Best Friends Pet Adoption Center in Salt Lake City, whenever she laced up her hiking boots or broke out the climbing ropes, she wished Buddha was there with her to enjoy the outdoors, too. So, Tina bought Buddha a harness and leash, and he’s been quite the outdoorsman ever since.

Meanwhile, somewhere in Canada or on a road headed to the next climbing spot are two adopters who share Tina’s adventurous spirit, as well as the idea that while road-tripping is a lot of fun, it’s even more fun with your pet by your side.

Rock climbing with a dog

Kim Fussell and her husband, Tim, are taking on the adventure of living on the road in their van, but before they embarked on their journey, they visited the Best Friends Pet Adoption Center looking for a dog made for road tripping. That’s how they met Harwood, who was at the center that day from Salt Lake County Animal Services, a No-Kill Utah Coalition shelter that each week brings dogs to the adoption center.

“By appearance, Harwood was exactly the kind of dog we wanted,” says Kim. “He was about 20 pounds and seemed very agile.” 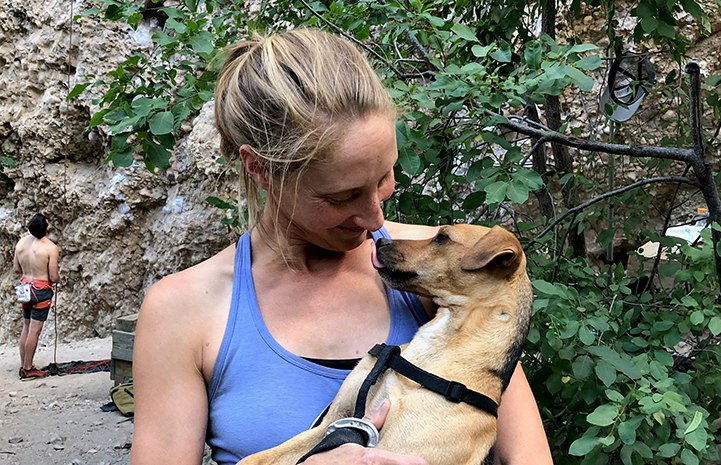 These were important things to consider because their adopted dog would be living in essentially a tiny house on wheels and would need to keep up with Kim and her husband, both avid rock climbers.

After spending some time with Harwood and discussing their living situation and lifestyle with the adoption team, Kim and her husband adopted him. These days, he loves being the leader on hikes, and then, after a long day of outdoor adventure, wiggling his way under the covers.

Buddha and Harwood are in good company with lots of other well-traveled pets whose adopters were determined to show how much fun and exciting the world beyond the front door can be.

Of course, Tina, Kim and Tim all took some extra steps to help their pets easily and safely adjust to life outside. For Buddha, who Tina adopted as a kitten after returning from Nepal where she and her daughter Megan were inspired by meeting countless homeless cats, it meant getting Buddha used to walking on a leash.

Tina began slowly by taking Buddha in his harness on short trips around the yard and neighborhood. “He wasn’t excited at all,” says Tina about their first walks. “He knew he’d have to wear the harness when we went out and he wasn’t happy about it.” But Tina didn’t let Buddha’s disdain for the harness stop her quest to show him the world (or at least Salt Lake City).

Slowly Buddha got used to it and now, he understands that it’s not meant to hold him back, but rather to give him the freedom to explore. Whenever he sees the harness now, he starts to purr.

“I had no idea cats could be so responsive,” says Tina, who bought him a cat backpack with a big porthole for him to gaze through during hikes. He’s also got a kitty pool and recently began climbing in it to play in the water. 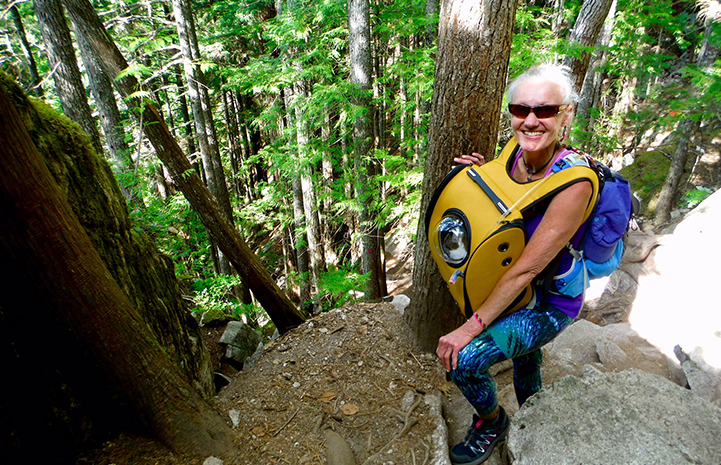 For Kim and Tim, it was important to adopt a dog who could quickly adjust to life on the road, although Kim admits that at first they were tentative about adopting Harwood. He spent most of the time in the meet-and-greet area of the center spinning circles and jumping at the door to get out of the room.

With the help of the adoption team, however, they decided to give Harwood a home. “We could see that he was more affectionate with the folks at Best Friends and throughout the whole meeting, he never barked or snapped,” says Kim. “We basically had a feeling that if he had a good outlet for his energy and learned to trust us, then he could be the dog that we always wanted.”

Kim and Tim spent some time training Harwood, who proved to be a very good student. He learned his name and to understand basic commands like stop, come, sit and stay. He’s also great around other dogs, which is important because lots of other climbers on the road have dogs, too.

Recently, the couple made the long journey from Colorado to Alberta, Canada, and Harwood was a champ the entire time.

“He basically slept in our laps the whole way,” says Kim. “Having Harwood has been really good for us, too, because it forces us to stop more often and get out of the van to go for little walks.” 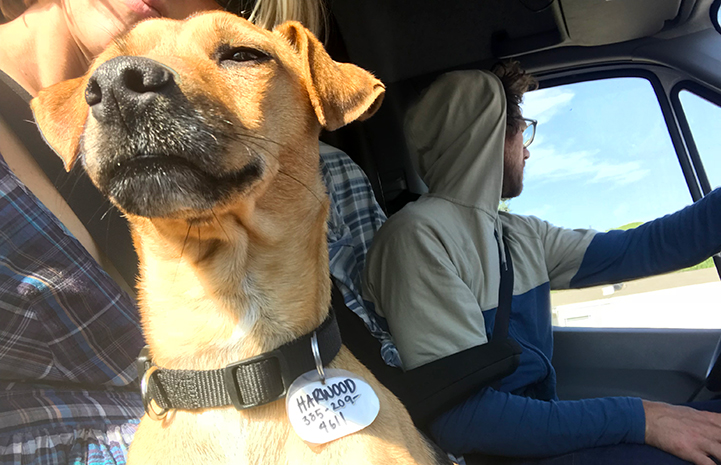 Little Buddha recently got to put his hiking skills to the test on his own long road trip to Canada, where he spent the day hiking with Tina, Megan, and Megan’s cat, Obsidian. Like Harwood, Buddha likes to lead the pack, and has proven that he’s a formidable hiker on a long mountain trek. When he needs to rest his four legs, Tina puts him in his cat backpack so he can relax and enjoy the trek in style.

The reward for the long hike was the summit view of the beautiful alpine lake below. And Buddha took it all in for a long time, purring as he gazed down at the water, one of his favorite things.

Tina hopes that experiences like this one will be shared by others with their cats. “I think people can underestimate an animal’s sense of adventure,” says Tina. “Cats are so adaptable. If you love it, you have to trust that they’ll love it, too.” 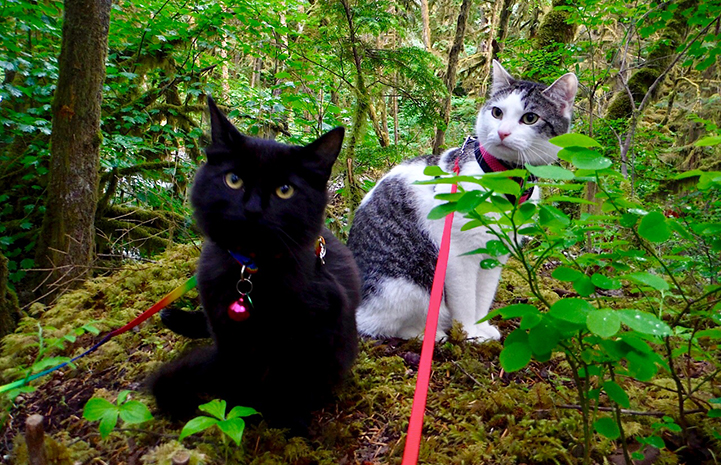 Advice from the road

Kim and Tim have a good piece of advice for people ready to adopt a canine copilot for life on the road.

“It’s important to get a good sense of the energy level and motivation of the dogs you are looking at adopting,” says Kim. “We could clearly see that Harwood had a lot of energy and felt that if he had a good outlet for that energy, then he would settle down. Thankfully, we were right.”

With a little training, a lot of patience and an open mind, Harwood and Buddha have adapted to life that goes well beyond four walls. After all, there’s no reason the outdoors can’t be their playground, too. 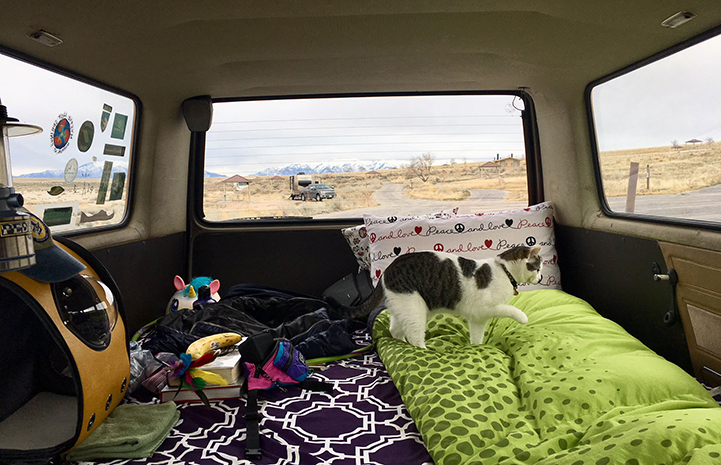