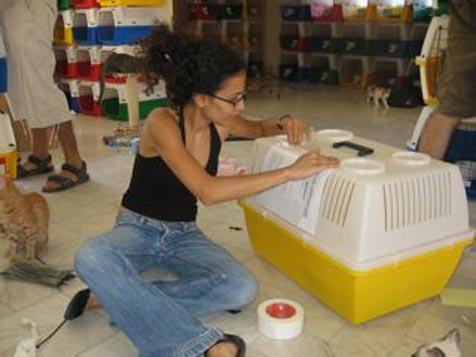 Strategies for helping animals in Lebanon

It goes without saying that running the only animal shelters in a danger zone like Lebanon carries with it challenges far different than those faced by rescues in the United States, but beyond those obvious distinctions it’s pretty much the same, according to the co-founders of Beirut for the Ethical Treatment of Animals (BETA).

Beirut for the Ethical Treatment of Animals' challenges

"BETA always lacks enough funds to fully conduct its goals," said Joelle Kanaan in a recent e-mail interview. "The rescue rate is much higher than the adoption rate so again we now lack space for newcomers at the shelters. As the workload is progressively increasing, BETA needs more volunteers and more committed people."

BETA is bursting at the seams, but at least it doesn’t have to contend with the war-like conditions that were in place last fall when Best Friends airlifted nearly 300 animals from Beirut to Utah. All but a few of those have been adopted.

There are currently about 130 cats and 200 dogs at BETA’s shelters.

"BETA is still carrying on with its rescue mission," Joelle said. "Cats and dogs are emerging from everywhere and most of the ones being picked up are in critical conditions: hit by a car, very sick, shot by cruel people or even municipality people but still surviving, and orphan puppies and kittens."

Joelle and co-founder Maggie Shaarawi plan to move their shelters, which are rentals, to leased land where they want to build new facilities based on American and European standards.

They are working to clear a couple of obstacles to their plans – one, of course, is funding, and the other is the difficulty obtaining a construction permit due to resistance from neighbors who don’t want "a place for animals" nearby.

In other aspects of its operation, however, BETA seems to be headed in the right direction.

BETA's goals for the future

"Not only did Rich manage the spaying/neutering operation of 200 of BETA's cats and dogs, but mainly, through a series of meetings with the BETA team, Rich helped put things on track and prepared us to move forward with all the future issues Best Friends will be helping BETA with," Joelle said, citing as examples hiring an executive director, becoming more organized and instituting more defined policies.

Looking forward, BETA’s goals include establishing a wide-ranging trap/neuter/release campaign, and pushing for strict regulations to ban the smuggling and illegal trading of domestic and wild animals in Lebanon.

A key element to BETA’s future success is educating the public about animal welfare, a challenge far more daunting in the Middle Eastern culture than it would be in the states.

"Even though the war is over, the political situation is still unstable," reads a statement posted on the organization’s website. "BETA is back to struggle, only this time things are harder, everybody is concerned in his/her own survival, scared of what will happen the next day.... Defending the animal's cause seem insignificant to most people. However, and as usual, BETA's unlimited compassion was a key element in continuing our mission in these hard times."

BETA will seek the same compassion, as well as responsibility, from the Lebanese people.

When asked what the public can do to help, Joelle said, "Have more respect toward animals. Stop animal abuse and mistreatment. Adopt rather than buy a pet. Promote BETA and respect what it does instead of criticizing its work, saying humans need help, not animals."

She said BETA will continue to turn to Best Friends for advice and support.

"It is sufficient for BETA to know that Best Friends is always there by its side, through the good and the bad, and that it will never let its animals down."