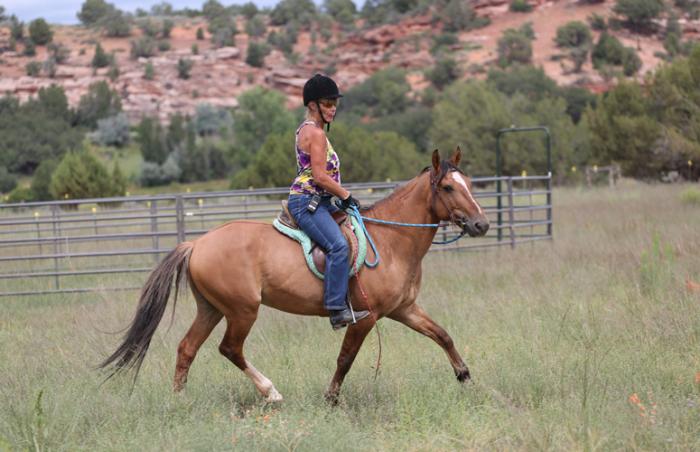 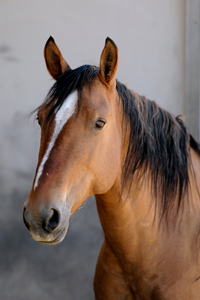 Kicking up red dirt as he moves quickly and confidently along the trail, Chuck the horse looks like he’s been doing this all his life. He’s steady, strong and sure with an experienced rider on his back. But it was a long, hard road that brought Chuck from a frightened stray to the capable riding horse he is today.

Chuck was essentially wild when he came to the Sanctuary at nine years old. As a stray in a community that runs along a busy highway, he’d been in danger of being hit by a car or causing an accident. Local animal control picked him up, but no one claimed him. With nowhere else to go and few options, Chuck’s future looked bleak — until he came to Best Friends.

When he arrived at Horse Haven, Chuck made it clear he didn’t trust people, and he rejected their attempts to build a relationship with him. He was so frightened he couldn’t think, and at first he fought any attempts to befriend him. “He adamantly declined to participate,” says Jen Reid, manager of Horse Haven.

He was also still a stallion. One of the first orders of business was to geld (neuter) him. In order for his wound to heal, he needed to walk with his caregivers twice a day, every day. At first, Chuck balked at this but gradually accepted the routine. It was the first tiny sign of hope. 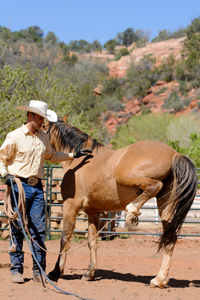 Trainers began playing Parelli Natural Horsemanship games with him. Parelli is the preferred horse training method for all the horses at Best Friends. The "friendly game" helped Chuck overcome his fear of people touching his body. Using a tool called a "carrot stick," which acts as an extension of the trainer’s arm, the Best Friends trainers gently stroked Chuck's back and sides until he was able to stand still rather than bolting.

But there was one area remaining that he couldn’t stand people going near — his back legs. No one could safely lift his back feet, which is necessary for cleaning out and trimming them. During a visit to the Sanctuary, Ryan Rose, a Parelli four-star senior instructor and senior horse development specialist, helped Chuck over that hump, using a rope instead of hands. Chuck quickly learned that no one would hurt him — even if they were holding his leg up. Now, the fearful horse could place his confidence in those handling his legs, and thus overcome his biggest fear.

It was Chuck’s turning point, and it changed his world.

Ready to be ridden

It wasn’t long before he was ready to learn to carry a rider, and since the day of his first ride, Chuck has never looked back. Now he gets to explore the landscape, just as he did before coming to Best Friends, except that now he ventures out with people instead of by himself. And it’s clear he’s happy to have the company.

In the prime of his life now, Chuck is sure-footed and strong, one of Horse Haven’s best trail horses. He’s so reliable that he can take a rider with him almost anywhere a horse can go. Horse Haven trainer Linda Alvey says, “He runs like a little jeep.” After a ride, Chuck returns to a safe pasture, good food and all the care a horse needs — for the first time in his life.

See Chuck in action on the trail.