When Rapunzel came to Best Friends in Los Angeles, she was malnourished, missing one of her back feet and had a severe intestinal issue that required immediate surgery. The team marveled that the tiny kitten was still alive.

After recovering for a couple of weeks from surgery, Rapunzel went into foster care with Kelsey Nisbett and Brendan McNerney. Under their watchful eyes and some significant help from their cat, Poppy, she grew and thrived until she gained enough strength for a necessary second surgery to amputate the rest of her leg.

[Survivor cat Poppy has a knack for helping other foster cats]

It soon became clear to Kelsey and Brendan that Rapunzel the kitten was no damsel in distress. No, this cat had a fighting spirit. Courtney Bean, lifesaving outcomes coordinator with Best Friends, also noticed Rapunzel’s feisty and strong personality. “It’s no wonder she survived everything she has been through,” she says. “She loves all people and animals, is very strong-willed and has a huge personality.” 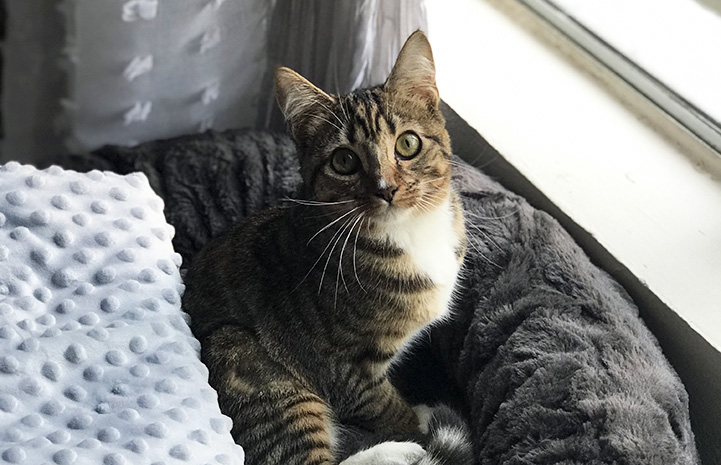 Kindergarten students to the rescue

It was Rapunzel’s irresistible personality that led Kelsey to text her friend, Kelly Ciurczak, a kindergarten teacher toying with the idea of adopting a cat. Unfortunately, her roommate, Rachel, immediately rejected the idea (albeit jovially), concerned about a cat scratching their furniture and otherwise disrupting their lives. Despite Rachel’s objections, however, Kelly asked Kelsey to send more photos of Rapunzel to share with Rachel. Still, she wouldn’t budge. 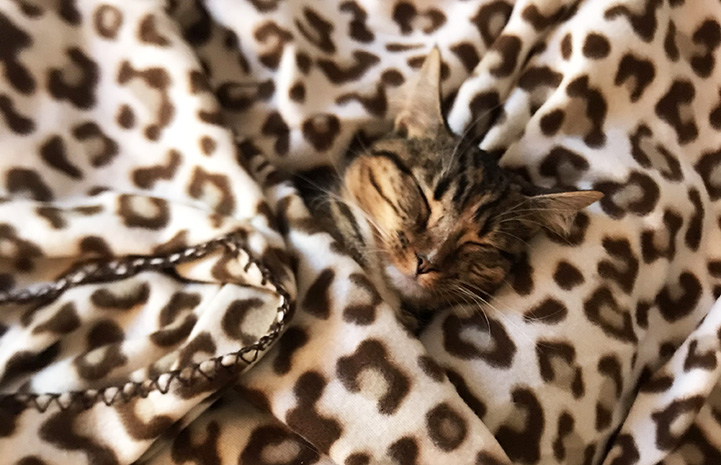 Meanwhile, at school Kelly started telling her young students about Rapunzel. In turn, they peppered her with questions, eager for her to adopt Rapunzel. When she told them that her roommate didn’t think it was a good idea, they protested, full of reasons why the adoption should happen. That gave her an idea: She’d have the kids write letters to Rachel.

Not only would the letter campaign be a good way to introduce persuasive writing to her students, but she could also do a little good-natured teasing of her friend and roommate. The kids worked hard on their letters and when they finished, Kelly posted them on Instagram and tagged Rachel, who at first responded by laughing the whole thing off. 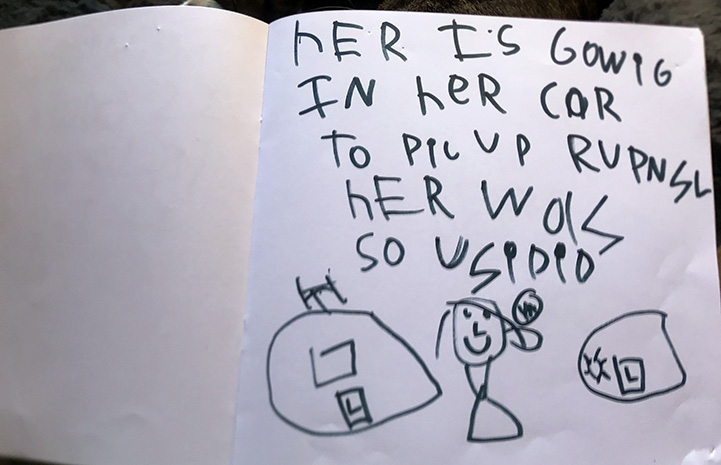 Then one day Kelly opened Instagram and read a post by Rachel. Under the photo, the caption read: “When you call your roommate to tell her you finally gave in and she can get the cat, but she doesn’t answer the phone.” Turns out, Kelly had missed a very important call. Rachel had changed her mind, thanks to the most persuasive people in the world ― kindergarteners. 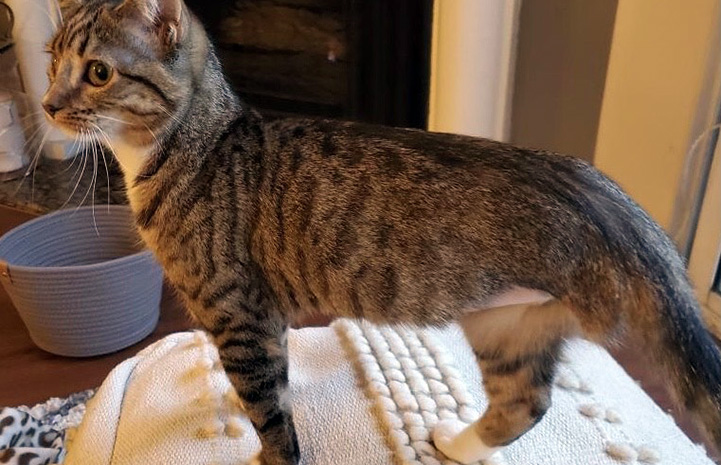 Getting serious about adoption

The next day the roommates took a long walk and talked seriously about adopting Rapunzel. Rachel shared that she had been having some anxiety, but then realized a cat’s calming presence might be just what she needed.

They talked about how they were home most of the time and had good schedules to care for a cat. And having heard so much about Rapunzel’s personality from Kelsey and Brendan, they recognized this as an opportunity to adopt a cat recommended by their friends.

[Kids send Valentines to the animals at Best Friends]

That same afternoon, they went to Kelsey and Brendan’s to meet Rapunzel and fell in love with her. Rapunzel still needed to be spayed, but Kelly let Best Friends know she was interested in giving her a home.

In the meantime, Kelly told her students that their letters had convinced Rachel to let Rapunzel come live with them. The lesson she had intended to teach them — that writing can be a way to state what you believe as you try to persuade people — had been more powerful than she had expected. 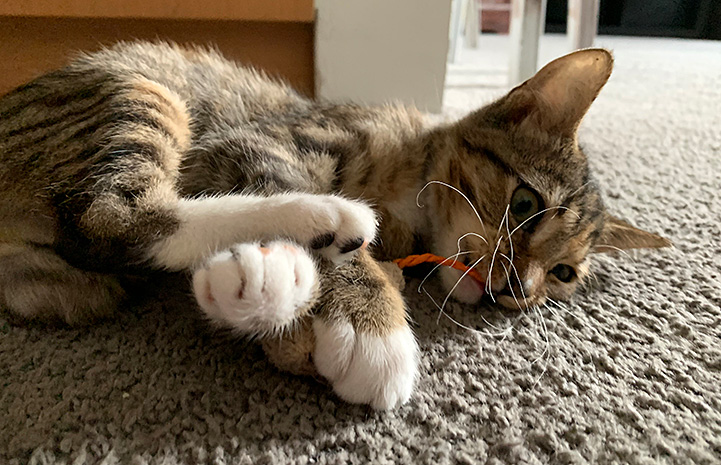 Rapunzel moves in and wins hearts

When the day finally arrived for Rapunzel to come home, Kelsey and Brendan brought her over to Kelly and Rachel’s apartment. She seemed at ease right away, and that night (and every night thereafter) she slept curled up on Kelly’s legs.

Now when Kelly arrives home, Rapunzel is at the door to greet her. She follows her from room to room and even wants to sit on her lap in the bathroom. She brings toys to people to tempt them to play and likes to “supervise” in the kitchen.

Rapunzel hops through the apartment like a rabbit and uses her strong shoulder muscles to pull herself up onto the L-shaped couch. Her favorite place to sit is at the end of the “L,” where she can watch activity on the street from her second-story vantage point. Kelly says, “We also have a balcony squirrel we call Carl, who comes every day. And Rapunzel loves Carl. They stare at each other for hours.”

As for Rachel, Kelly says, “She probably loves (Rapunzel) more than she loves me,”  adding that Rapunzel sits on Rachel’s lap when she’s on the couch. And in the mornings, when she hears Rachel moving around the apartment, Rapunzel meows at Kelly’s bedroom door until Rachel lets her out. 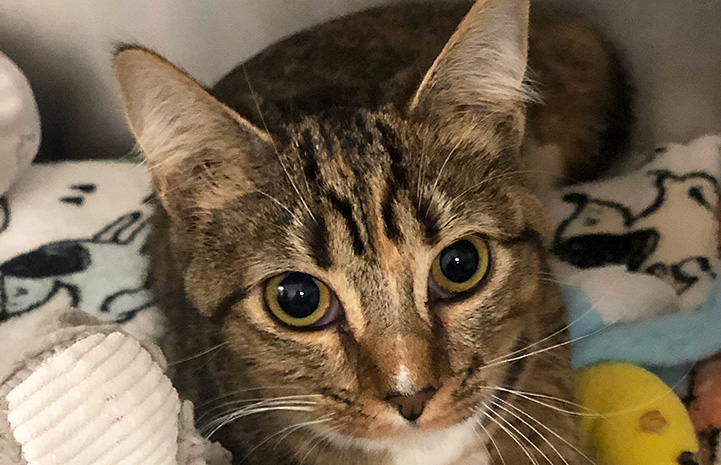 Recently, Kelly’s students got a chance to meet Rapunzel, too. On the big day, Kelly could tell they felt a tremendous sense of pride that they were able to help a three-legged kitten find her perfect home and as a result give their Ms. Kelly so much joy.

While the kids all hope Rapunzel will return for another visit, they continue practicing their writing. In fact, their stories frequently feature the “Adventures of Rapunzel.” 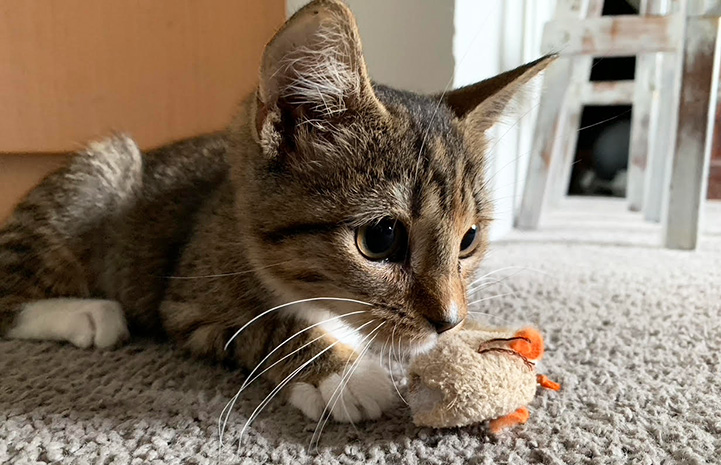 Adopt a cat or dog from your local shelter and provide the happily-ever-after all shelter animals are eagerly waiting for.

Adopt a dog or cat near you