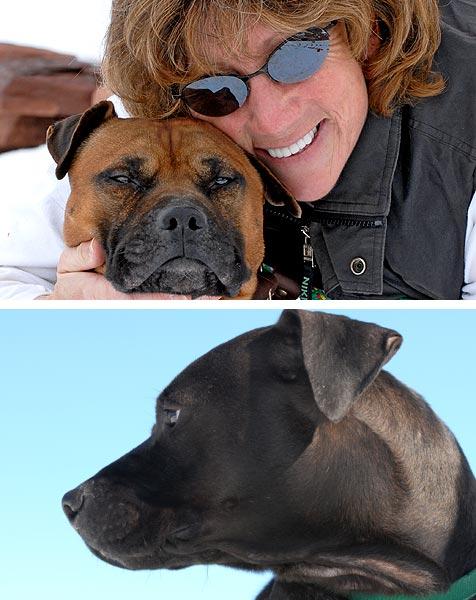 When Halle the dog first came to Best Friends in early January, she was absolutely terrified of people. That’s understandable, considering that she was one of the dogs rescued from Michael Vick’s dog fighting ring.

Halle and 21 other "Vicktory" dogs have been at Best Friends Animal Sanctuary for almost three months now, and their progress has been nothing short of amazing.

Best Friends veterinarian Dr. Frank McMillan is doing a long-term study on the dogs’ emotional health. He hopes to study the dogs over their lifetimes, even after most of them move on to forever homes. Armed with a clipboard, he observes each of them monthly, evaluating them on their progress when it comes to things like aggressiveness, fearfulness, excitability, submissiveness, calmness and friendliness.

Their caregivers at Dogtown are helping out with the study by charting the dogs’ progress almost daily, giving them a score from 1 to 10 on things like confidence, fear, energy level, positive interest in and affection for people, interest in toys and other personal enrichments, and overall enjoyment of life.

A glance at Halle’s chart shows that when she first came to Best Friends, her fear level was 9 and her confidence level was 2. But she’s improving. One recent caregiver assessment showed that she scored 5 on her fear level and 4 when it came to confidence. With time and loving, patient care, she has grown less fearful and more confident. Dr. Frank’s assessments also show that Halle’s fear has decreased and her calmness has increased.

Studying the emotional health of dogs is a challenge. After all, dogs can’t come out and tell you what they’ve been through, what they’ve seen or how they’re feeling. "They have stories to tell that no one has ever heard," Dr. Frank says.

So he and the Dogtown caregivers must learn by observing, and then by doing specific things to help the dogs overcome their fears and help them get more joy out of life. Each dog has a personalized emotional rehabilitation and enrichment plan. It’s a groundbreaking study and the results could help guide the emotional rehabilitation of dogs for years to come.

When it comes to trauma, what makes some animals resilient while others are more susceptible to problems? Are there preventive measures that can be taken early on to help dogs avoid problems down the road? These are just a couple of the questions Dr. Frank hopes to find answers to.

"That’s the whole goal – to pick up on things going in the wrong direction and find out which techniques get them back on track," he says. "Our job is to bring out those good traits – affection toward humans, friendliness – while eliminating the undesirable traits like antagonism toward other dogs."

When Dr. Frank evaluated Ray in January, he was very frightened of strangers. Today, assessments show that Ray’s fearfulness has decreased. "His willingness to have a stranger approach him changed dramatically for the better," Dr. Frank says. "He’s developed a greater sense of security, so his anxiety has diminished."

Dogtown caregiver Carissa Hendrick has been working with Ray and the other Vicktory dogs since they arrived at Best Friends. Carissa says Ray now enjoys jumping off the platforms and running through the tunnels on the agility course, which she says helps build the dogs’ confidence. "They become proud of themselves," she says. "It’s an accomplishment."

Carissa has also seen marked improvement in Halle. "Halle has totally changed," she says. "She’ll play with toys and does a lot of zooming and play-bowing."

Carissa says the dogs still have some anxiety when it comes to strangers, but once they get to know people, their anxiety decreases. "Once they face their fears and start overcoming them, they start to enjoy life more."

Seeing the dogs’ progress has been rewarding for their caregivers. "I didn’t know they were going to make progress so fast," Carissa says. "They’re amazing. To see where these dogs were and who they’ve become – that’s what it’s all about."

Fellow caregiver Bill Jones agrees: "Most are them are different dogs than they were when they came here. They’re coming out of their shells."

Photos of Halle (black) and Ray by Gary Kalpakoff